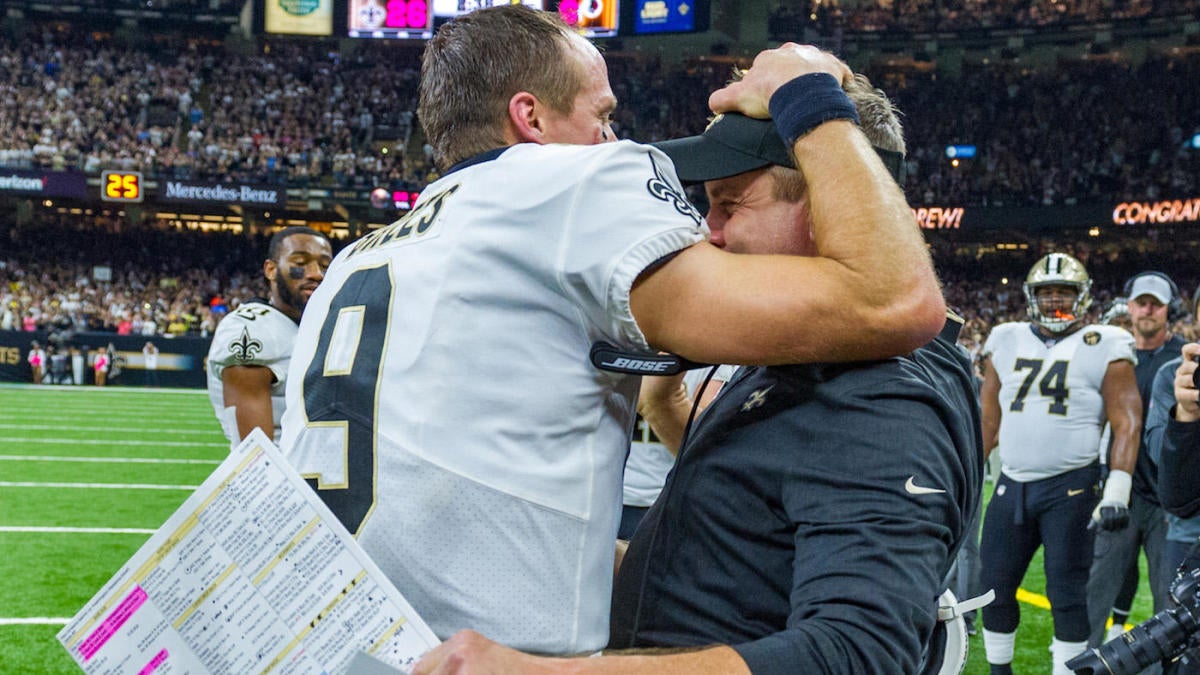 Drew Brees rewrote the record books once again in Week 15, surpassing Peyton Manning for the all-time touchdown record. Naturally, the Saints quarterback was showered with praise upon breaking the record, which now adds to the all-time yards milestone he surpassed a year ago. One NFL great that shouted Brees out was Hall of Fame quarterback Brett Favre. Not only was Favre in awe of Brees’ record-breaking moment on Monday Night Football, but he put the Saints quarterback and head coach Sean Payton in elite company, calling them “the most prolific duo in history.”

“We’ve come to really expect that, much like you expect Tom Brady to win,” Favre told SiriusXM NFL Radio about Brees’ ability to turn in historic performances. “Again, whether you like it or not, you just kind of expect, ‘Well, we can’t beat the Patriots ’cause they have [Bill] Belichick and Brady.’ You feel that way with Drew Brees and I always like to include Sean Payton in this because I think that duo itself is by far the most prolific in history. It’s still writing their own record books.”

Given how he was crediting the duo in New England of Tom Brady and Bill Belichick for their knack to win games, Favre appears to be speaking about the prolificness of Brees and Payton in terms of offensive output, which is on point. Since those two have been paired together in New Orleans, they’ve been on a record-setting path that has Brees raising the bar at the position.

“I think he’s been so good,” Favre continued. “You know, he’s won one Super Bowl, let us not forget. I mean, he could have gone to many more if you just went off of his statistics and how he’s played. He has played outstanding no matter what — no matter who is receivers are, his running back. And it’s just and amazing career that is still building.”

Not only did Brees get the touchdown record in this win over Indianapolis in Week 15, but he also recorded the most accurate game in NFL history, completing 29 of his 30 throws for a 96.7 completion percentage.  While he may not be able to stack up to Tom Brady’s six Super Bowl rings or Peyton Manning’s five MVP awards, Brees can hang with the all-time greats when it comes to individual statistics. Without counting the postseason, Brees edges both Brady and Manning in career passing touchdowns, passing yards and QB rating.

“You know, I marvel at what he’s been able to do,” Favre said of Brees. “The thing about Drew, I just think that this is a lesson to all those out there listening that — look what Drew Brees has done. Now, will you be Drew Brees? That remains to be seen, and that will be big shoes to fill.

“But you know, he has managed to do it, and he’s not 6’5″. He’s no 240 [lbs]. He plays like he is, but just, again, an amazing career, and probably if you go back to the Combine, they were probably looking over his head, picking the next guy, picking the next guy. Not that anyone doubts him anymore, certainly, but he has proven everyone that doubted him that they are dead wrong.”

Brees likely needs at least another Super Bowl title to really enter the conversation of being the greatest quarterback of all-time, but he and Payton have one huge supporter in Favre, which is particularly noteworthy.