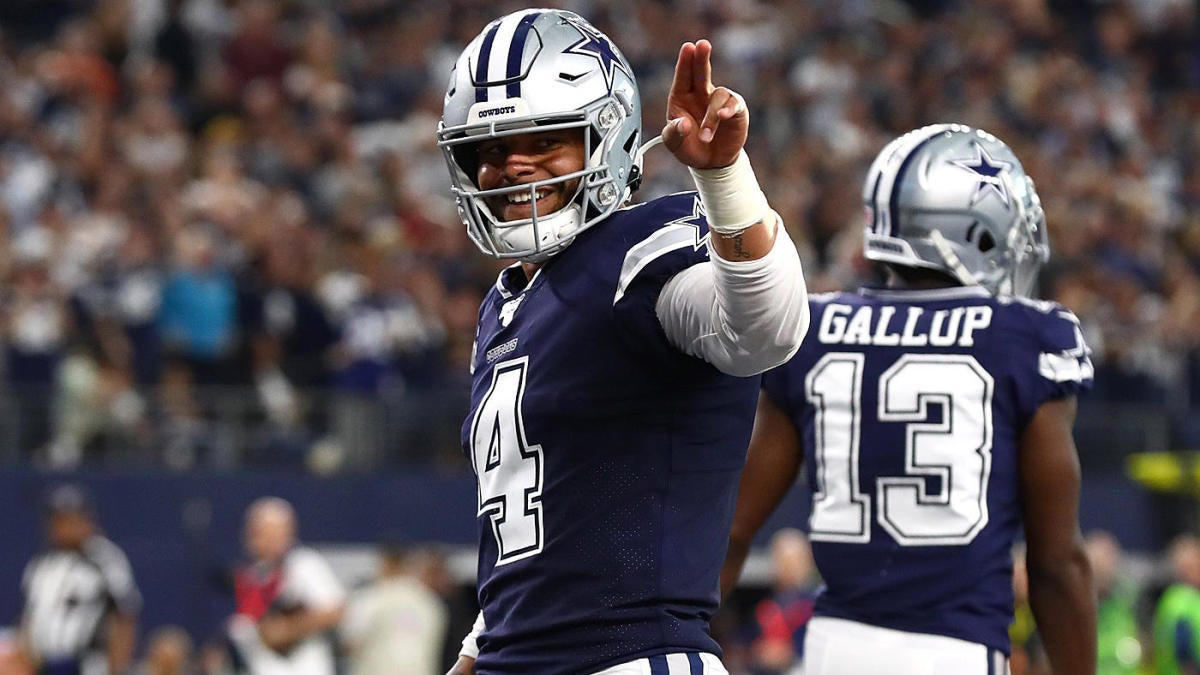 The Philadelphia Eagles and Dallas Cowboys will fight for the NFC East title and a playoff berth … a rite of passage in the division over the past 11 years. The Eagles have gotten the better of the Cowboys in these winner-take-all games, beating Dallas 44-6 in 2008 and 24-22 in 2013, with a playoff berth on the line in each. This will be the case on Sunday, as Philadelphia and Dallas are eliminated from wild-card contention; the only way to the playoffs is to win the division.

Dallas wins the NFC East with a win, while Philadelphia will need to beat the Cowboys and the New York Giants in Week 17 to earn the playoff spot. The Eagles are just 1-7 against the Cowboys at Lincoln Financial Field this decade and have lost four straight games to Dallas, so the odds are against them to win this one. Dallas is 5-0 against Philadelphia when Ezekiel Elliott plays.

Other exciting Week 16 games include the Buffalo Bills at New England Patriots, the New Orleans Saints at Tennessee Titans and Green Bay Packers at Minnesota Vikings. The playoffs are almost here, but let’s get to those Week 16 picks first.

This is a prototypical trap game for the Texans, coming off their huge win at Tennessee to take over the AFC South lead. They’ll be facing a Buccaneers team without Mike Evans and Chris Godwin, but Jameis Winston is still capable of having a big game. The Buccaneers are first in the NFL in pass yards per game (308.8), while the Texans allow 266.1 pass yards per game (28th in NFL). Matchup advantage for the Buccaneers, especially since Winston had no problem throwing to Breshad Perriman for three touchdowns last week. The Texans will be able to throw on the Buccaneers too. Winston leads the league in interceptions, but Houston doesn’t generate enough turnovers to make an impact.

Who should you back against the spread, on the money line and the total in every Week 16 NFL game? And which Super Bowl contender goes down hard? Visit SportsLine to see their Week 16 cheat sheet, all from the model that is up over $7,000 on its top-rated picks.

The Bills need a win over the Patriots and more help in Week 17 to snatch the AFC East from New England, while a Patriots win seals the division. The Pats really aren’t going to blow this opportunity, are they? The Patriots have the NFL’s top-ranked defense in points (12.4), yards (268.4) and yards per play (4.5) allowed, but the Bills had 375 yards against them in their 16-10 loss in Week 4 … the most against New England’s defense all year. The Bills will have to ride Devin Singletary in this one. The stats actually point to Buffalo winning, but it’s hard to bet against Tom Brady and Bill Belichick.

The Rams aren’t eliminated from playoff contention yet, but they are virtually eliminated after an embarrassing loss to the Cowboys. The 49ers are coming off a last-second loss to the Falcons, and they’ll have plenty to play for as home field advantage is at stake. San Francisco’s defense hasn’t been elite in recent weeks, allowing 31.7 points (29th in NFL) and 125 rush yards a game. The Rams can take advantage of the 49ers by getting Todd Gurley 25-plus touches, but how willing will Los Angeles be to do that? San Francisco gets back on the right track.

The Steelers showed their flaws against a top defense in last week’s loss to the Bills, which is expected given they have a fourth string quarterback in Duck Hodges. Mike Tomlin won’t commit to his starting quarterback yet, but Pittsburgh will be facing a Jets team with a great run defense. The Steelers don’t have a great ground game to begin with (91.5 yards, 26th in NFL) and ran for just 51 yards against the Bills last week. Still, the Jets will be hard-pressed to score much, and Pittsburgh wins easily if New York can’t get a ground game going.

It’s the battle for last place in the NFC East: who wants it? The Giants have been playing better football in Eli Manning’s two starts, but it’s uncertain whether he’ll start for a third straight week. Dwayne Haskins had his best game of the year for the Redskins last week and is facing a Giants defense that allows 66.32% of passes to be caught and 7.7 yards per pass (both 27th in NFL). The Giants do have trouble on short crossing routes, which is where the Redskins can move the ball. This game is a toss-up. The Giants are coming off a win, but the Redskins have been playing better football. Washington wins it.

Something has to give. The Panthers are on a six-game losing streak and the Colts have lost four straight. Carolina’s run defense is still one of the worst in the NFL, allowing 5.2 yards per carry (last) and 140.2 (30th). That’s good news for a Colts offense that has been decimated by injuries. Indianapolis has averaged just 64.7 rush yards a game over the past three, but that should change here.  Indianapolis isn’t as bad as it looked against New Orleans on Monday night.

The Browns were the last team to beat the Ravens, winning in Baltimore in Week 4 behind 193 yards and 40 points. Both teams have taken significantly different directions since then, as the Ravens’ improved defense has allowed just 13.6 points per game over the past five. Meanwhile, the Browns have allowed 176.3 rushing yards in the last three games. The Browns have quit on their coach and have plenty of internal problems while the Ravens appear to be an unstoppable force. Nick Chubb ran for 165 yards and three touchdowns in the first meeting. That’s not happening again.

The Jaguars were finally able to get a win last week, but their run defense is still a major problem. Jacksonville has allowed 182.7 yards on the ground over the past six games. Fortunately, the Jaguars will be facing a Falcons team that has rushed for fewer yards than all but two teams. Still, the Falcons, who throw the ball more than anyone in the league, have won four of six since the bye and ran for 159 yards when they faced a bad Panthers run defense. They can do it again, especially against a Jaguars defense that allows 6.0 yards per play (28th in the NFL).

The Titans will know before this game if they’re still alive for the AFC South title, as a Texans win means the Titans will be eliminated. But the Titans would still be alive for a playoff spot, so this is a game they have to win. The Saints, currently the No. 3 seed, are playing for home field advantage. New Orleans’ biggest advantage is in completion rate (the Saints are No. 1 in the NFL, while Tennessee is 22nd in opponent’s completion rate). New Orleans should go pass happy on Tennessee, and I see the Saints getting a signature road win.

The Raiders can’t seem to buy a win since their 6-4 start, when they had a chance to compete with the Chiefs for the AFC West. The Chargers aren’t any better, losing by 29 points at home to the Vikings last week as the offense had seven turnovers. The Raiders defense has been a huge letdown over the past four games, allowing 34 points per game and the highest percentage of third-down conversions. The Chargers have converted 50% of third downs in that same stretch, tied for third in the league. Both teams are struggling, but the Chargers have the advantage in this one, especially if they can avoid turning the ball over.

This is another matchup of teams that have been eliminated from the playoffs. The Lions haven’t won a game since October and have one of the league’s worst pass defenses, but will Drew Lock and the Broncos be able to take advantage of it? The Lions are just too banged up on offense to compete, playing with their No. 3 quarterback and without their top two receivers. This will be an ugly game and the Broncos are at home.

The Seahawks are one of four teams tied for the best record in the NFC, and currently have the No. 1 seed in the conference. But this could be a trap game for Seattle, as the Seahawks will play the 49ers for the division in Week 17. Seattle took care of Arizona 27-10 in their Week 4 meeting and shouldn’t have an issue running against a bad Cardinals rush defense. The Seahawks average 141.7 yards on the ground and have won their last four at home, and I don’t think they’ll get trapped here.

The Eagles have lost their last four games against the Cowboys and haven’t won a meaningful game against Dallas in Philadelphia since 2011 (their win in 2016 was when Dallas had home-field advantage in NFC wrapped up). Philadelphia lost by 27 points to the Cowboys in Week 7. For the Eagles to win this one, they have to stop Ezekiel Elliott, who has averaged 114.8 rushing yards in five games against them (Dallas is 5-0 when Elliott plays against Philadelphia). This game will come down to third down conversions as the Cowboys and Eagles are ranked first and second in the league, respectively. Dallas is fourth in third down conversion rate allowed (34.29%) while the Eagles are ninth (35.43%). Whatever team can win that chess match will take over first in the NFC East. The Eagles haven’t given any reason why they will be beat the Cowboys, so this game is Dallas’ to lose.

The Chiefs are playing for home field advantage and the Bears are eliminated from playoff contention. The Chiefs have a shaky run defense, allowing 131.6 rushing yards (26th in NFL) and 5.0 yards per carry (30th in NFL). Unfortunately for the Bears, they don’t seem to be set up to take advantage of that as, they are 29th in the league with 3.5 yards per carry and just 85.6 yards a game. Kansas City’s defense has improved lately, allowing 11.5 points over the past four games, while forcing nine turnovers. The Bears offense has turned things around a bit lately, too, but not enough to hang with the Chiefs.

A golden opportunity for the Vikings awaits, as they could move into a tie with the Packers atop the NFC North. Minnesota needs to beat Green Bay and hope the Packers lose at Detroit in Week 17 to get the division crown. This game could prove the Vikings belong as a Super Bowl contender. The Vikings should have Dalvin Cook back, helping a run offense that averages 135.9 yards on the ground (fourth in NFL).  The Packers have struggled against top offenses in the second half of the season, allowing 37 points to the 49ers and 26 points to the Chargers, both losses. This is a game the Vikings should win.