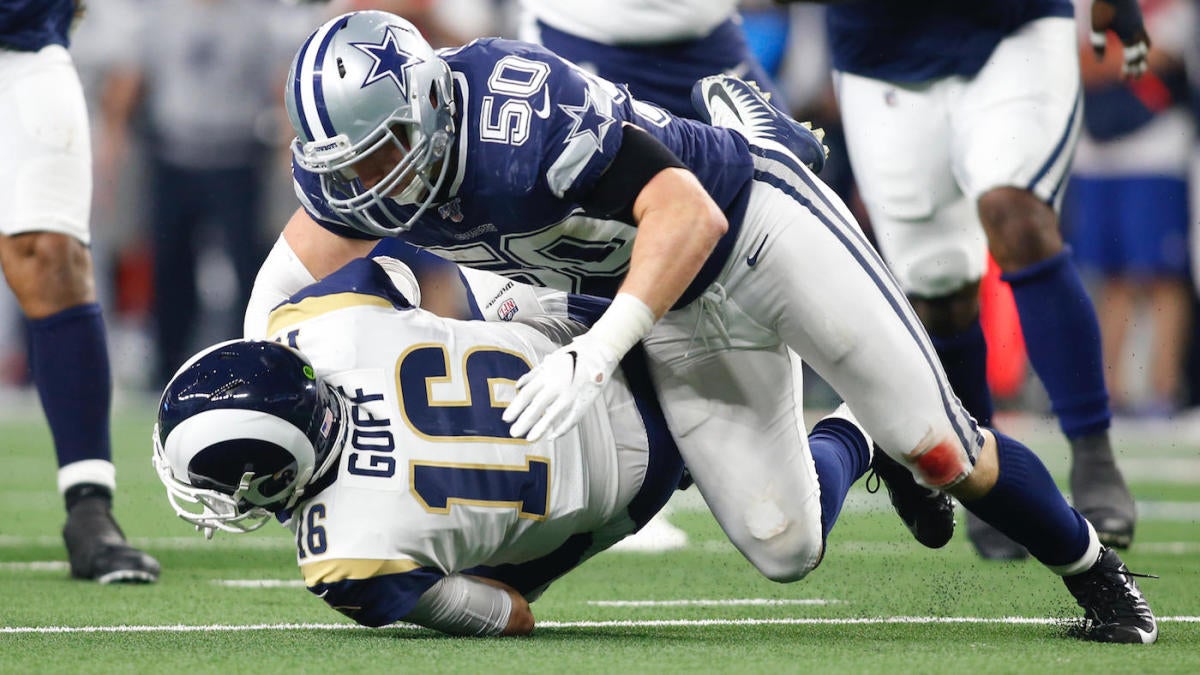 ARLINGTON, TX — Have a day, Sean Lee. The veteran linebacker battled through an injury to both his thigh and pectoral muscle the entire week heading into the Dallas Cowboys‘ matchup with the Los Angeles Rams, and he wasn’t ruled in until just ahead of kickoff but, in the end, none of that mattered.

The 33-year-old led the defensive charge in a 44-21 backhand slap that saw him sack Jared Goff on one instance and intercept him on another, marking the first time in his career the All-Pro was able to do both in a single game. Both plays were critical to the Cowboys maintaining the momentum they had established, but particularly the interception, because it came with the score at 21-7 and the Rams driving with only 1:33 remaining in the first half.

Thanks to Lee, instead of potentially going into halftime with a 21-10 or 21-14 score, the Cowboys ended the first half with a 28-7 lead and simply dropped the Rams casket deeper and deeper from there. And not to be forgotten was the return after the interception, with Lee showing off his skills as a former high school running back.

“My high school coach was actually at the game, so I wanted to give him a little flashback of what I did in high school,” Lee said while wearing a large smile after the game.

It’s the first interception for Lee since 2017 and comes in a season that followed contemplation of retirement, before deciding to not only remain with the Cowboys through 2019 but also taking a pay cut in the process. Mostly unknown to the public is it wasn’t the Cowboys who approached the two-time Pro Bowler for a reduction in pay, but it was instead Lee prompting them to lessen his salary as he accepted a new role at strongside (SAM) with reduced snaps — noting the emergence of first-round pick Leighton Vander Esch and former second-round pick Jaylon Smith as the new guard of LB in Dallas.

“I came back because I love this organization” Lee said. “I love my teammates. Both stuck with me through a lot of tough times, through a lot of injuries and through a lot of missed games. Coming back, my goal was to just help in any way I can. Whatever that was positionally, however many snaps that was, I just want to help us win. So having this win is big, but I want to continue to help us get to that ultimate goal.”

Eternally the consummate professional and teammate, tight end Jason Witten — who had quite a day himself thanks to an eye-opening one-handed touchdown grab to help the Cowboys blast off early — was flat out beaming when asked about Lee’s career afternoon.

“Today was his day,” Witten said. “The guy’s done so much. To battle through injuries and have the opportunity to come in and have that type of game — I’m just happy for him. I’ve played 10 years with the guy.

“To pour himself out there like he has and like we’ve done together, you’re just pulling for him. …It’s special. It’s good to see him playing like that. …Games like this is why you do all that work — to have just a few moments when you can turn back that clock. I’m happy as hell for Sean Lee.

“He’s one of the good guys. He deserves it.”

Lee came close to landing an interception on at least two other occasions earlier this season, but couldn’t reel it in. When he did against the Rams, the sideline went crazy, and especially Dak Prescott.

“I don’t know if I’ve been more excited during a play in a football game than I was when Sean Lee intercepted that ball,” Prescott said, noting a practice battle that’s been ongoing for a while between the two. “He’s been trying to get that pick on moe for a long time in practice. He did two years ago, and it’s been a constant battle with me and him in there. He was able to get that interception and had a great return.

“I looked up and saw him making people miss and hey, there’s another fullback if we need one. It was great.”

For his part, after struggling the last few games, Lee knew he needed to rally the troops. One sip from the Fountain of Youth later, Goff and the Rams found themselves reminded why Lee was once a First-Team All-Pro (2016).

“We weren’t the type of defense we wanted to be. We said hey, let’s win the hitting. Let’s win the hustle. Let’s keep it simple and play right. That’s a start, and I think we did that.”

They did, in fact, do just that — especial-Lee thanks to the guy wearing No. 50.