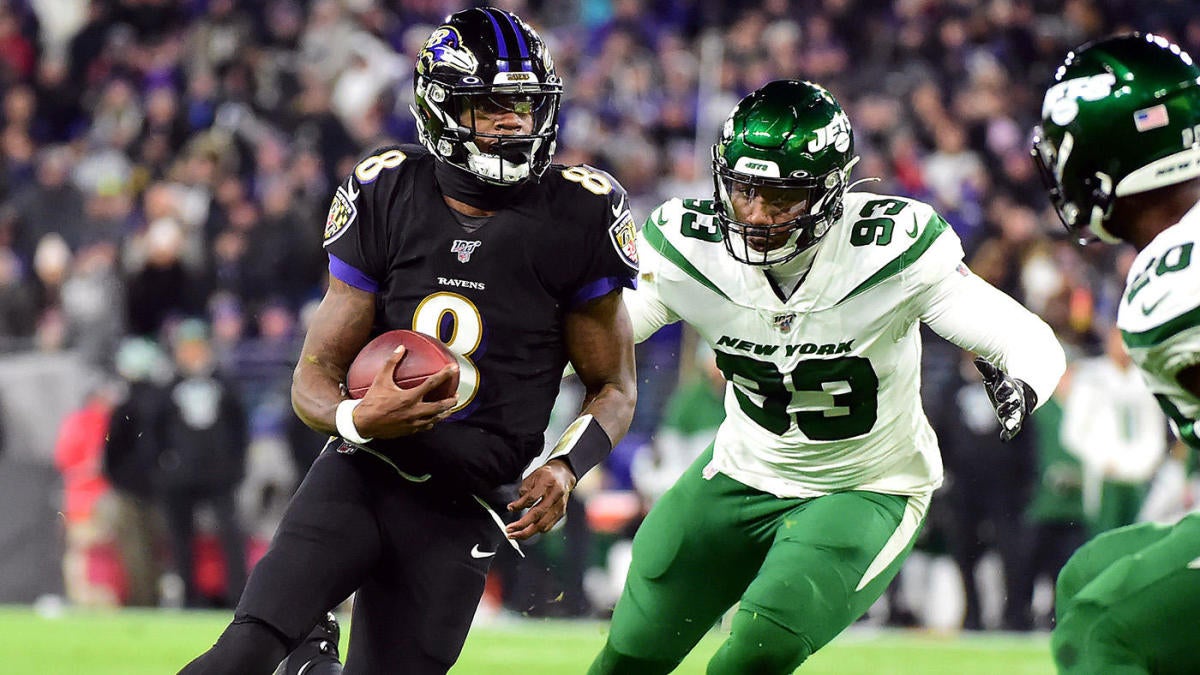 Lamar Jackson has continued to have one of the greatest seasons for a quarterback in the NFL’s 100-year history. Jackson is cruising toward the league’s MVP award at the age of 22, which would make him the youngest MVP in league history. Jackson set the rushing yardage mark for quarterbacks in a season in Thursday night’s win over the New York Jets, breaking Michael Vick’s 13-year old record of 1,039 yards. Jackson is the first quarterback to rush for 1,100 yards in a season (1,103).

It’s been a truly impressive season for Jackson, but that’s just the beginning of all the historic feats he has accomplished in 2019.  Let’s take a look at 10 that have defined his season.

1. First player in NFL history to have five passing TDs and 50+ rushing yards in multiple games in a season

Jackson has thrown for five touchdown passes in three games this season, twice in the last three weeks. He has 19 carries for 187 yards in those games, averaging 9.8 yards per carry. Jackson’s completion percentage in those games is 74.6%.

Lamar Jackson led the Ravens to their 10th straight win and there’s a lot to go over, so Ryan Wilson and Sean Wagner-McGough joined Will Brinson to break everything down on the Pick Six Podcast. Listen below and be sure to subscribe for daily NFL goodness.

2. More touchdowns than the Ravens punter has punts

Jackson has 40 total touchdowns this season (33 passing, seven rushing). Ravens punter Sam Koch has 35 punts on the year, showcasing how dominant the Ravens offense has been through the first 14 games.

3. Only one other QB has ever had this many 5 TD/0 INT games in a season

The only other player to have three games with five passing TDs and no INTs in a season is New England Patriots quarterback Tom Brady, who did it during his 50 touchdown season in 2007. Brady accomplished his feat in 10 games, including throwing for five touchdowns in back-to-back games. Brady has six games with four touchdown passes in 2007, while Jackson has four.

Jackson has only started 21 games in the NFL, and only six quarterbacks have accomplished this feat more: Cam Newton, Randall Cunningham, Michael Vick, Steve Young and Russell Wilson. All these players have played eight years or more.

5. Jackson has done this more times in the last two weeks than every QB in the league’s 100-year history

Jackson has thrown five TD passes and rushed for 80-plus yards twice in the last four weeks. In the history of the NFL, it’s something that only one other QB has accomplished (Cam Newton) and he did it just ones. Newton threw for 340 yards and five touchdowns and rushed for 100 yards in Week 14 of the 2015 season, and he’s still the only quarterback to rush for 100 yards with five touchdown passes.

Not much needs to be said here. Only two quarterbacks have run for 1,000 yards in a season (Jackson and Vick) and Vick had just 20 touchdowns when he rushed for 1,039 yards in the 2006 season.

8. Touchdown pass rate of one every 8.9 passes is highest in NFL since 2011 and fourth highest this century

If you factor in Jackson’s rushing touchdowns, his touchdown percentage is at 10.8. He can shatter Manning’s mark with seven touchdown passes in his final two games.

9. First QB to rank among top-five in rushing for a season (if it ended today)

Jackson’s 1,103 rushing yards currently put him fifth in the NFL (which should last until Sunday, as he’s the only one in the top 10 to already play his Week 15 game). His 78.8 rush yards per game are currently 10th in the league.

10. Ravens franchise record for touchdown passes in a season

Jackson tied Vinny Testaverde’s mark for touchdown passes in a year with 33. Testaverde accomplished the feat in 1996, which was the Ravens’ inaugural season. Testaverde made the Pro Bowl that year when he threw for 4,177 yards, which was a career-high along with his passing touchdowns. Jackson and Testaverde are the only Ravens quarterbacks to throw for 30-plus touchdowns in a season.