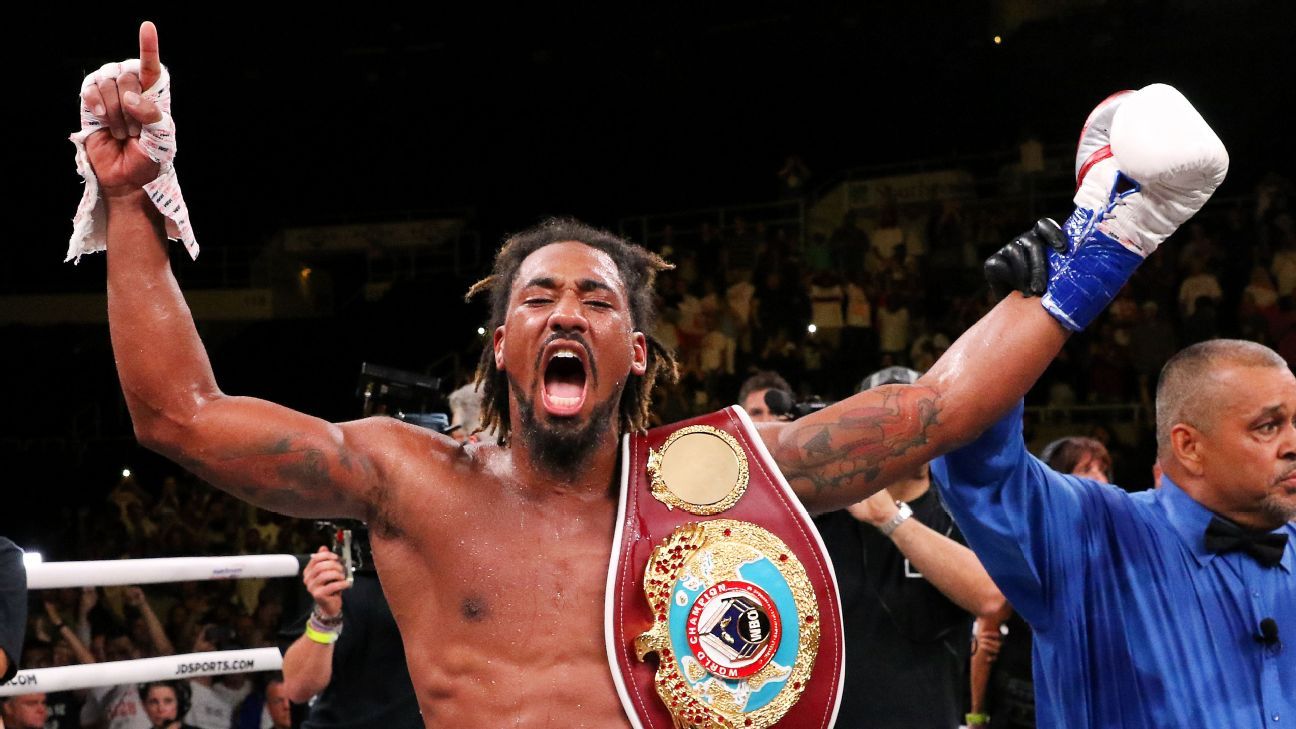 Middleweight world titleholder Demetrius Andrade was considered as an opponent for world champion Canelo Alvarez but didn’t get the fight. He would have also liked a unification fight against Jermall Charlo, but despite barking between the two, that went nowhere quickly.

Unable to land a big-time fight, mainly because he represents a very high risk with only a modest financial reward, Andrade is not about to sit around waiting for another top middleweight to fight him. He will instead defend his title against Luke Keeler on Jan. 30 (DAZN) in the main event of a world title tripleheader, Matchroom Boxing promoter Eddie Hearn announced on Thursday

The card, which also will include a much-discussed showdown between junior lightweight world titlist Tevin Farmer and Joseph Diaz Jr. and unified junior featherweight world titlist Daniel Roman taking on dangerous mandatory challenger Murodjon Akhmadaliev, will take place in Miami as one of the events being planned around the Super Bowl, which will take place there on Feb. 2.

Andrade, who was a junior middleweight world titlist before vacating his title to move up in weight, will be making his third middleweight defense. He is coming off a shutout decision of contender Maciej Sulecki on June 29, Andrade’s first professional fight in his hometown of Providence, Rhode Island, and is anxious to get to business.

“I’m looking forward to getting back in the ring again finally,” he said. “It’s a great opportunity to show the world my talents and to be part of Super Bowl weekend in Miami is incredible. Miami is a beautiful city and I’m looking to once again showing that I’m the best 160-pound fighter in the world. It’s me again.”

Andrade (28-0, 17 KOs), a 31-year-old southpaw, is hoping that a good performance against Keeler will lead to a fight with one of the better known names in the division.

“There are major fights for me in the middleweight division. Those are the fights I want and I’ve been very vocal about it,” Andrade said. “At the end of the day, I just need to keep winning. They can’t avoid me forever. On Jan. 30, we have to take care of business against Luke Keeler. He’s tough and he’s coming to fight, which will make for a great night of action for the fans in Miami and everyone else watching around the world on DAZN.”

Keeler (17-2-1, 5 KOs),32, of Ireland, is 7-0-1 in his past eight fights since 2016 and coming off his most notable victory, a 10-round decision against Luis Arias, whom he dropped twice, in August in Belfast, Northern Ireland. Arias’ only previous loss had come by decision to Daniel Jacobs in November 2017.

“Demetrius is a great fighter, and I understand I’ll be written off as a huge underdog, but it’s exactly how I like it. There isn’t a drop of pressure on me,” Keeler said. “It feels surreal in a way but at the same time, I’ve always visualized it so in a way I expected this opportunity to come. Again, there is no pressure on me at all. I’ll have nerves like every fight, but I’m going to enjoy every moment, bounce to the ring and pull off the upset.

“It’s a life changing fight, and winning brings life-changing paydays, but I would’ve taken this fight for free to be in the position that comes with winning. It puts me right up there for fights with Gennadiy Golovkin and Canelo Alvarez.”

Farmer-Diaz, agreed to on Thursday evening, has been a much-anticipated bout among hardcore fight fans since the two nearly came to blows in May at the Canelo Alvarez-Daniel Jacobs undercard new conference in Las Vegas. Diaz fought on the card but Farmer was on hand and the two southpaws went nose to nose in a shouting match after the news conference and had to be separated.

Farmer (30-4-1, 6 KOs), 29, of Philadelphia, won a vacant 130-pound belt in August 2018 when he traveled to Billy Dib’s home country of Australia and easily outpointed him. Then Farmer reeled off four defenses between October 2018 and July, when he cruised to one-side decision over mandatory challenger Guillaume Frenois in Arlington, Texas.

Diaz (30-1, 15 KOs), 27, a 2012 U.S. Olympian from South El Monte, California, suffered his only loss by decision challenging Gary Russell Jr. for his featherweight world title in May 2018. Diaz has won four in a row since, including the last three after moving up to junior lightweight.

Diaz injured his left hand/wrist in a majority decision win over Jesus Cuadro on Sept. 21 for which he spent time in a brace but he said he will be ready for the fight.

Roman-Akhmadaliev was originally scheduled to take place on Sept. 13 in New York, but Roman suffered a left shoulder injury and had to postpone the bout. Akhmadaliev instead stayed busy that night with a fourth-round knockout of Wilner Soto on the Devin Haney-Zaur Abdullaev undercard.

Roman (27-2-1, 10 KOs), 29, of Los Angeles, will be making the fifth defense of his 122-pound world title he won in 2017 in Japan. He is coming off an action-packed battle with TJ Doheny, whom he defeated by majority decision to unify two titles.

“Our goal all along was to have this fight in 2019, but injuries happen so we had to be cautious and wait a little longer than we wanted,” Roman said. “I’ve been back in the gym with no limitations and I can say I feel fresh and motivated to defend my title once again.

“This is the longest break I’ve had between fights in a long time so it’s only natural for me to be anxious to get back in the ring. Akhmadaliev presents a strong challenge, and I know that I’ll be getting his best shot, but I’ve been down this road before and everyone knows my track record in world title fights.”

Akhmadaliev (7-0, 6 KOs), 24, a 2016 Olympic bronze medalist from Uzbekistan and one of boxing’s hottest rising contenders, has minimal professional experience but has been moved very rapidly because of his deep amateur background.

“I am very glad that Daniel Roman took this fight,” Akhmadaliev said. “I know that we are both warriors and this will be a real war.”