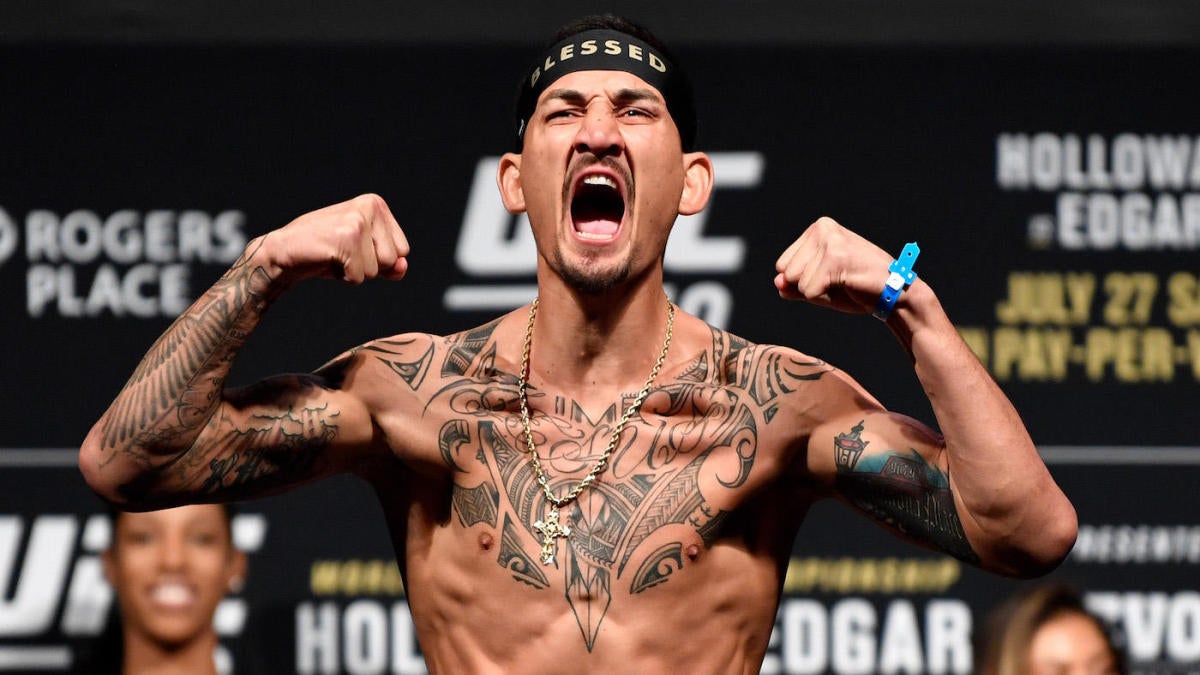 It’s almost time for the final UFC pay-per-view of the year, and it’s a big one. Three title fights will go down at UFC 245 from T-Mobile Arena in Las Vegas, including one of the biggest grudge matches in history on top of the card. There’s meaningful action from the prelims to the main event, something that can’t always be said about a UFC event.

In the main event, Kamaru Usman defends the welterweight championship against bitter rival Colby Covington. Max Holloway puts his featherweight title on the line against top-ranked contender Alexander Volkanovski. And, in the other title bout on the card, arguably the greatest female fighter in the history of MMA, Amanda Nunes, puts her title on the line against Germaine de Randamie. Let’s take a closer look at the card, starting with the first fight off the bat.

Oskar Piechota -115 vs. Punahele Soriano -115, middleweights: After an 11-0-1 start to his career that only saw two fights reach the judges’ scorecards, Piechota (11-2-1) has lost back-to-back fights. Making matters worse, both fights — against Gerald Meerschaert and Rodolfo Vieira — ended in submission losses. Soriano (6-0) will be making his official Octagon debut after earning his way to the UFC with a win on Dana White’s Contender Series. That fight was the only in his career to end in decision, with two submissions and three knockouts coming previously.

Viviane Araujo -170 vs. Jessica Eye +140, women’s flyweights: Eye (14-7) started her UFC career with a win over Sarah Kaufman that was overturned due to a positive drug test for marijuana metabolites. She then lost five of her next six fights, with every loss coming via decision against some top names in the division. Eye then dropped to flyweight and the UFC’s decision to keep her around despite the move coming after a four-fight losing skid paid off. With three straight wins, Eye received a title shot against Valentina Shevchenko, but lost via second-round head kick knockout. Araujo (8-1) doesn’t share as dramatic a ride in her UFC career, simply entering the UFC on a three-fight win streak before Octagon wins over Talita Bernardo and Alexis Davis ran that streak to five. Her May knockout of Bernardo was a highlight reel display of power.

Kai Kara-France -160 vs. Brandon Moreno +130, flyweights: Kara-France (20-7) enters the fight as the No. 6 ranked flyweight in the CBS Sports UFC divisional rankings. After a 7-6 start to his career, he has gone on a 13-1 run as his competition has gotten better and the lights have gotten brighter. Making his Octagon debut one year ago, Kara-France has won three straight decisions in the UFC. Moreno (15-5-1) has spent more than three years as a member of the UFC roster. After three wins to kick off his career, he has a 1-2-1 record in his four most recent fights. His most recent bout was a draw against Askar Askarov.

Chase Hooper -130 vs. Daniel Teymur +100, featherweights: Teymur (7-3) made his way to the UFC after a 6-0 start to his career and things quickly went wrong. He lost his first three UFC bouts, two by rear-naked choke. He finally turned things around in June with a decision win over Sung Bin Jo. Hooper (8-0-1) is an undefeated 20-year-old prospect set to make his UFC debut on one of the biggest cards of the year. He has won two fights by submission, four by knockout and has only seen the judges’s scorecards three times, once battling to a draw.

Matt Brown -360 vs. Ben Saunders +290, welterweights: It seems almost impossible Brown (21-16) and Saunders (22-12-2) have never fought in the UFC. With a combined 42 UFC fights, it seems the two always-game competitors would have crossed paths by now. Brown has been fighting in the Octagon since June 2008, but he has not fought since November 2017 due to an ACL injury and associated rehabilitation. Saunders made his UFC debut in December 2007 and after seven fights was let go from the promotion with a two-fight losing skid. It took four years before he battled his way back to the UFC in August 2014, winning his first three fights back. Saunders is currently on a three-fight losing skid and a 1-5 run.

Ian Heinisch -150 vs. Omari Akhmedov +120, middleweights: Middleweight is a tough division to crack into the top 10, but these are the kind of fights that place the winner on the verge of earning their way onto the list. Akhmedov (19-4-1) has been fighting in the UFC for more than six years and has only suffered three defeats. He’s on a five fight unbeaten streak that includes four decision wins and a draw. Heinisch (13-2) had a five-fight winning streak snapped in his most recent bout, a decision loss to Derek Brunson in August.

Ketlen Vieira -185 vs. Irene Aldana +155, women’s bantamweights: With a women’s bantamweight title fight as one of the night’s headliners, Vieira (10-0), ranked No. 3 in the CBS Sports rankings, may be just one win away from punching her ticket into a fight with the winner. She continued her unbeaten ways once joining the UFC, winning four consecutive bouts, though not always convincingly. Two of her Octagon victories have come via split decision. No. 9 ranked Aldana (11-5) doesn’t have as sparkling a record as Vieira, but she has faced some big names in the Octagon and has a 4-3 record.

Geoff Neal -250 vs. Mike Perry +200, welterweights: Perry (13-5) made a splash in the UFC with his big power punching style. He won four of his first five UFC bouts, all by knockout. As the competition increased, the knockouts — and wins — stopped. After his blazing start to his UFC career, Perry has gone on a 2-4 skid. Neal (12-2) has been perfect over his six most recent fights, which include four in the UFC. Nine of his 12 career victories have come via stoppage and he has only seen the scorecards once in his UFC career.

Petr Yan -500 vs. Urijah Faber +360, bantamweights: Faber (35-10) was once the face of the featherweight division, winning the WEC championship and defending it successfully five times. While he remained a big star, becoming champion again was not in the cards. He lost six attempts to win back a championship in WEC and UFC after his title loss to Mike Brown. He only lost two non-title fights from the time he won the WEC title in March 2006. Faber retired after a win over Brad Pickett in December 2016 but came out of retirement this July and scored a knockout win over Ricky Simon in just 46 seconds. He now, unbelievably, could return to a title fight if he defeats the highly regarded Russian. Yan (13-1) is riding an eight-fight winning streak that includes five UFC victories. He is ranked No. 2 at bantamweight in the CBS Sports rankings and a win over Faber is the kind of signature win that could land him in the Octagon with division champ Henry Cejudo.

Marlon Moraes -200 vs. Jose Aldo +160, bantamweights: Aldo (28-5) defeated Faber during his lengthy reign as the top featherweight on the planet. After an 18-fight winning streak, a mega-fight with Conor McGregor ended in disaster for the Brazilian as he lost just 13 seconds into the fight. Aldo won the interim featherweight championship in his next bout, a decision win over Frankie Edgar and was later promoted to full champion status. He lost the belt against Max Holloway and lost the rematch, both by knockout. He is 2-1 since, but the decision to drop to bantamweight has brought controversy as he already struggled to make the 145-pound featherweight limit. Moraes (22-6-1) entered the UFC after an impressive career that saw him capture the WSOF championship and defend it successfully five times. He dropped a split decision to Raphael Assuncao in his Octagon debut before rattling off four consecutive wins, including two by knockout. That run landed him in the cage with Henry Cejudo for the vacant UFC bantamweight championship, losing by knockout in the third round. Moraes is currently ranked No. 5 in the CBS Sports rankings.

Amanda Nunes (c) -340 vs. Germaine de Randamie +270, women’s bantamweight championship: Nunes (18-4) defeated de Randamie in November 2013, before the Brazilian established herself as possibly the greatest fighter in the history of women’s MMA. Nunes lost her next fight but then rattled off nine straight victories, including beating Ronda Rousey and Cris Cyborg, both by knockout in less than a minute. She captured the bantamweight title with a submission of Miesha Tate while the Cyborg knockout earned her the featherweight title. The names littering her current win streak read like a who’s who of the top names in the history of women’s MMA: Rousey, Cyborg, Holm, Tate, Shevchenko (twice), Pennington, McMann, Baszler. For de Randamie (9-3) redemption for their first fight will not be easy. She has run through the opposition since that loss, going 5-0 and scoring wins over big names of her own, including Holm, Pennington and Ladd. De Randamie comes from a kickboxing background and that power has shown with three knockouts during her five-fight winning streak. Nunes is the clear No. 1 ranked fighter in the division with de Randamie at No. 2 in the CBS Sports rankings.

Max Holloway (c) -185 vs. Alexander Volkanovski +155, featherweight championship: A 13-fight winning streak for Holloway (21-4) was snapped when he made the decision to move to lightweight to battle Dustin Poirier for the interim title at 155 pounds. He bounced back with a win over Frankie Edgar to defend the featherweight crown. Volkanovski, ranked No. 2, is riding a 17-fight win streak that includes seven wins in the Octagon. In his two most recent fights, he knocked out Chad Mendes and scored a decision win over Aldo. Eleven of his 20 career victories have come via knockout.

Kamaru Usman (c) -185 vs. Colby Covington +155, welterweight championship: When the UFC was pushing the idea of Tyron Woodley as the greatest of all-time in the welterweight division — this despite Georges St. Pierre’s existence — Usman (15-1) came along and dominated 25 minutes of action in their bout to become the champ. That March fight feels like a lifetime ago, and Usman had, in many ways, faded from the spotlight until Covington (15-1) and his trash talk turned their rivalry into one of the most talked about in MMA. This is a battle of men on lengthy winning streaks, Usman at 14 and Covington at seven, but it’s also a battle of egos. Covington has played up a character, for better and for worse, but he has backed up his talk with impressive wins, most recently dominating Robbie Lawler while throwing a record-breaking 541 strikes. Both men have solid amateur wrestling backgrounds and have developed well-rounded games to go along with them. It’s an intriguing battle on paper and there will be no disputing the true champion at 170 pounds once the men settle things in the cage.