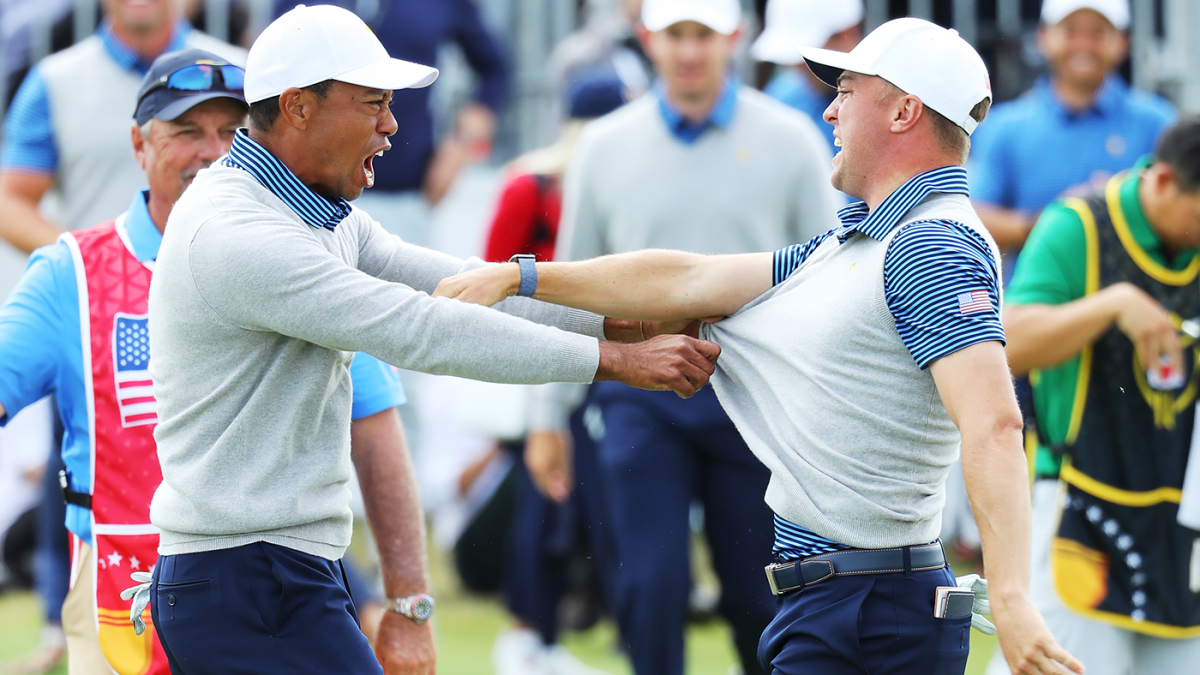 Day 2 of the 2019 Presidents Cup was an absolute roller coaster. For most of the session, it looked as if the International team would come close to sweeping the Americans and take something like a convincing seven- or eight-point lead going into Day 3. The rout was nearly on. Nearly.

With around 90 minutes left in the day, there were five International flags on the board and none for the Americans. But then Tiger Woods and Justin Thomas closed hard (more on that below), Rickie Fowler and Gary Woodland clawed back ,and Patrick Cantlay hit a monstrous putt to get the U.S. within striking distance going into the eight matches on Friday on Day 3.

Let’s take a deep dive into a wacky second day of play at Royal Melbourne.

Dustin Johnson and Matt Kuchar were in the first pairing out, and they were the first to fall. Adam Scott and Louis Oosthuizen played fine — best swinging duo in the event (don’t email me) — but on four of the six holes they won, the U.S. side made bogey. After leading for the first eight holes of the match, D.J. and Kuchar somehow found a way to lose 3&2 and didn’t even see the 17th hole.

“With the golf course the way it is, pars are good,” Oosthuizen told Golf Channel. “You don’t really have to do a lot more.”

That tells you everything you need to know about this match.

Patrick Reed and Webb Simpson got baptized next as Father Abraham made many (more) birdies. Six in all, to be exact, which is a crazy number for alternate-shot play. The big drama here came at the 11th hole — which the teams halved with birdies — when Reed finally snapped on the Australian fans.

They’d been taunting him throughout the first two days for his sketchy penalty at the Hero World Challenge last week when he moved some sand around in a bunker. To taunt (?) them, he fake dug a hole, which doubled as the one his team was in at the time. The whole thing was bizarre and not the greatest look. Especially after a 3&2 loss.

Finally, the U.S. put its second full point of the week on the board when Patrick Cantlay made a birdie at the last which gave him and Xander Schauffele a 1UP win over Adam Hadwin and Joaquin Niemann. They were one of only two pairings to lead their match yesterday, but their energy through the first two days hasn’t been super impressive. Still, they made four big birdies over the last 10 holes to reverse the momentum and dig the U.S. at least a little bit out of the hole they were in for 24 straight hours. They knew it, too.

“Ours was a hard-fought match today,” said Cantlay. “We needed to flip the script a little bit.”

Following Cantlay’s putt, Thomas provided the moment of the event to this point from the same spot. After going back and forth with Ben An and Hideki Matsuyama, Woods and Thomas got it all square with a birdie on No. 13. The teams made four straight 4s before Thomas did this at the final hole.

“I’m speechless,” said Thomas. “I’ve been fortunate to make a lot of big putts and made a lot of big shots, but to do it with my captain and an unbelievable teammate to win the match and hopefully change the tide of this Presidents Cup was awesome.”

Behind them, Rickie Fowler and Gary Woodland birdied three of their last four to flip a match in which they trailed for the first 16 holes. They couldn’t quite get the full point, but it was as big a half-point as you can earn on the second day of a four-day competition.

So now we go to Day 3 with the U.S. riding the emotion of their best player (Thomas) and their best player this week (Tiger Woods). They’ll need to at the very worst not lose any more ground before the 12 singles matches on Sunday. And if either of those days are anything like the last hour-plus on Day 2, the rest of the event is going to be absolutely tremendous.

CBS Sports was with you the entire way updating this story with the latest scores, highlights and analysis from the Presidents Cup. If you are unable to view the updates below, please click here.

Thanks for joining us.