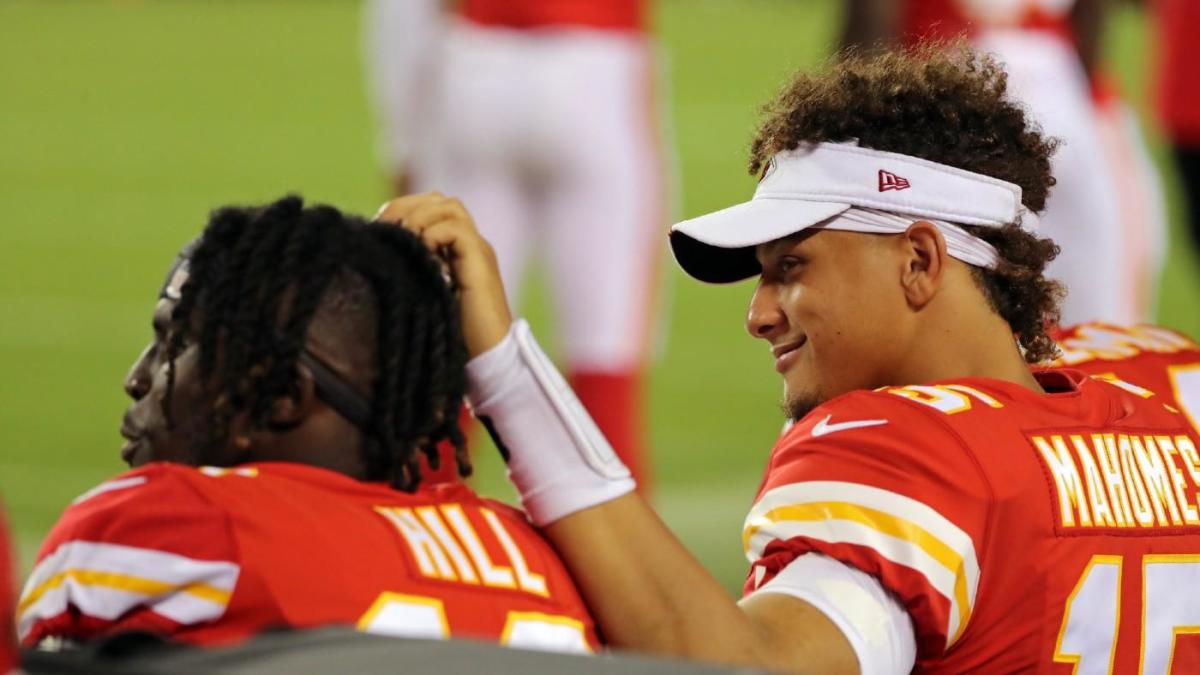 The NFL is a passing league. You know this. I know this. Just about everyone in the league knows this.

Because it’s a passing league, quarterbacks are the most important players on the field. And just about every quarterback has that one pass-catcher he trusts more than anybody else — the guy he wants to go to in key spots, with the game on the line. With that in mind, we’re going to use this space over the next several weeks to dig into some of the league’s best passing-game combinations and what makes them tick.

In the space below, we’ll dig in on Patrick Mahomes and Tyreek Hill, whose connection is defined by explosion.

It would be rather appropriate to say that both Mahomes and Hill exploded onto the scene. Hill debuted two years earlier, first as a part-time offensive player and the best return man in the league. As a rookie, he scored nine offensive touchdowns on only 85 total touches, adding three more scores on his 53 total return attempts. He played only 41 percent of the Chiefs‘ offensive snaps and still led the team in touchdowns.

He became something close to a full-time player in 2017 (76 percent of snaps) and 2018 (87 percent), and his production was even more explosive. He totaled 162 catches for 2,662 yards and 19 touchdowns during those two seasons, adding 210 yards and a score on 39 carries, as well as two more scores in the return game.

Mahomes did not debut until the final game of his rookie season, and was not named the starter until the Chiefs traded Alex Smith to Washington. Expectations were high for the Kansas City offense in 2018, but they smashed those expectations by putting together one of the most explosive offenses in NFL history. Mahomes’ rare skill set was at the center of it all, as he threw for 5,097 yards and 50 touchdowns on only 580 pass attempts. Hill accounted for 1,479 yards and 12 touchdowns on 87 catches, and he and Mahomes hooked up for a completely ridiculous five touchdown passes of 50 yards or more.

Without a doubt, that type of explosive play is Hill’s signature. He can work well as a possession receiver due to his quickness off the line, but he’s at his best burning opposing defenses down the field. And that’s where the partnership with Mahomes — who has arguably the strongest arm in the league and definitely has the widest variety of delivery angles — comes in.

Over the past two seasons, the two have connected on 18 pass plays of 30 yards or more, most for any quarterback-receiver duo in the NFL. Mahomes’ 56 completions that have gained 30 or more yards are most in the league among quarterbacks, and Hill’s 22 receptions (he had four with Matt Moore) are the most among receivers. The eight 30-plus-yard touchdowns Hill has caught are also most in the league, and that’s despite his missing several weeks this season with a sternum injury.

Mahomes and Hill create those splash plays in all kinds of different ways. They actually used the exact same play for two of them last season, changing only which side of the field they used to beat the division rival Chargers and division rival Broncos with a quick slant that was delivered in enough space for Hill to snatch it and zoom past every available defender to create yards after the catch.

Mahomes’ ability to escape pressure and give his receivers time to get open combined with Hill’s preposterous speed makes for one of the best scramble drill combinations in the NFL. If you do not completely box Mahomes into the pocket, he will break free of the rush and buy just enough time for Hill to shake free of a defensive back, at which point there is not a single throw that exists that Mahomes cannot make. He can scramble right or left and launch the ball on a straight line down the field, and drop it right into a bucket where only Hill is able to snag it.

That’s not to say that none of Mahomes and Hill’s connections are designed for big gains. Almost every time the Chiefs want to take a shot down the field, it’s Hill who they want on the receiving end. They will dial up shot plays at important moments, counting on Hill to simply be faster than whichever poor defensive back ends up in front of him, and even if he’s not, to be able to beat that defensive back to the ball when it’s in the air. More often than not, that bet ends up netting them some points.

The Chiefs love to make you think Hill’s not going deep, then hit him over the top of the defense anyway. They’ll line him up in the slot in a full-on spread formation, have every other receiver run a hitch or a quick out or a slant or something else to occupy the underneath defenders while Hill just smokes a slot corner on an inside fade route, which Mahomes has more room to complete down the field because Hill has aligned inside and thus has more space before he hits the sideline. Give Mahomes that much space and he’s not going to miss.

Hill also just has completely ridiculous footwork on his go routes. I’m not sure how you deal with someone who can start off in a pitter-patter step and explode up the sideline with his kind of speed. He’s made cornerbacks as good as Jalen Ramsey and Patrick Peterson look totally helpless as they attempted to stop him from getting up the sideline. There’s nothing opposing defensive backs can do about this.

The connection has been offline for much of this season, as Hill played only 12 snaps before exiting with an injury to his back in Week 1, missed four games and returned on a snap count in Week 6, only to see Mahomes get injured the following week and not return until Week 10. So, these guys have essentially played just four full games together all year. And yet, the Chiefs are still 9-4 and sitting in the No. 3 seed in the AFC.

It’s unlikely they’ll be able to secure themselves a bye in the playoffs, but a team with this much firepower — and an improving defense — has a shot against anybody, as they’ve already proven by beating both the No. 1 seed Ravens and No. 2 seed Patriots earlier this season. The Chiefs aren’t the favorites. They don’t necessarily seem as dangerous as they were last year, when Mahomes was doing things nobody had ever seen before. But you can’t count them out. Not when they can create a score from anywhere on the field with more consistency than any team in the league.