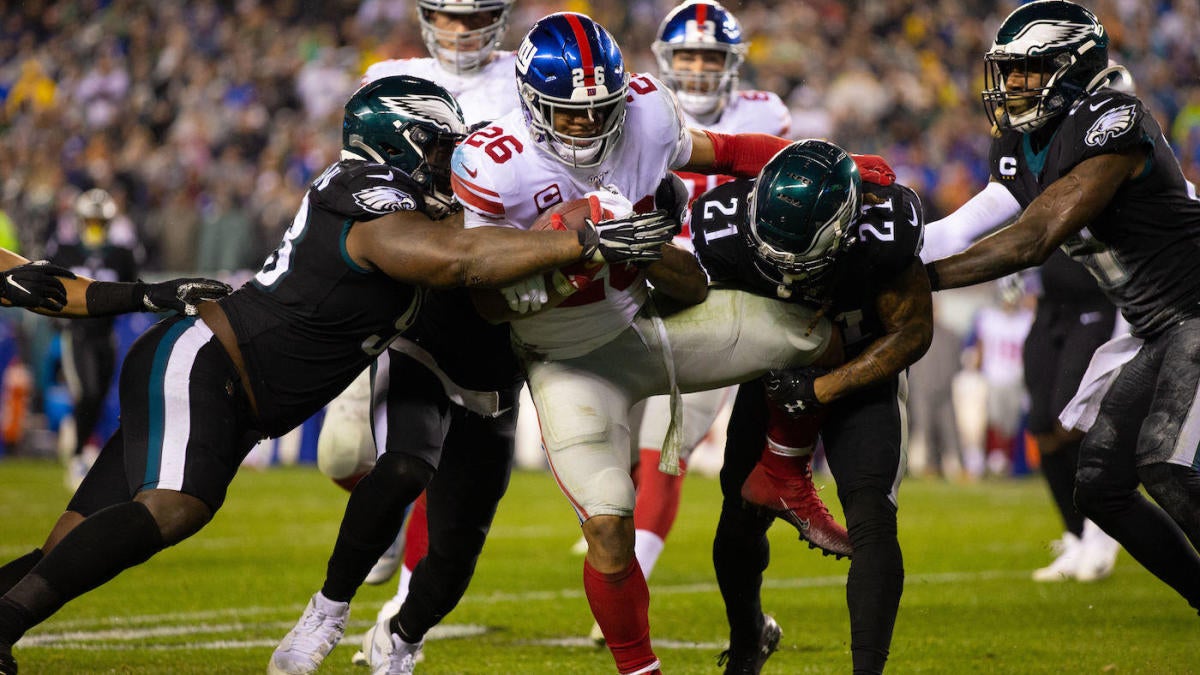 It’s been that kind of season for the Giants, the kind of season where they can’t hang onto a 14-point lead in the second half against a team literally unable to use three-receiver formations because they didn’t have three healthy receivers.

On Monday night, the Giants went into Philadelphia with Eli Manning as their starter again, built a 17-3 lead in the first half, and then proceeded to blow that lead over the course of the second half, eventually falling 23-17 in overtime — prompting one of the Giants’ best players to question his own team for creating an identity of losing. According to running back Saquon Barkley, the Giants are just a team that finds ways to lose football games.

“We’re a team that finds a way to lose a lot of games,” Barkley said, per NJ.com. “That’s what we are as of right now, yes. That’s our team. We’re just an inconsistent football team. We find ways to lose games.”

Obviously, he’s not wrong. The Giants dropped to 2-11 on the season after letting the Eagles escape with a win. They haven’t won a game since September. They’ve lost nine straight games. Since Barkley arrived in New York last year as the No. 2 overall pick, the Giants have posted a 7-22 record.

“It doesn’t sit well with me,” Barkley said of the Giants’ losing streak.

What made their latest defeat all the more demoralizing is just how much they controlled the game. The Giants led by 14 points until the final two minutes of the third quarter. In the first half, Manning turned back the clock to repeatedly torch the Eagles’ secondary deep downfield. The Eagles entered the game with only three active receivers and then lost Alshon Jeffery to a game-ending injury in the first half. Late in the contest, they were down to one healthy receiver. Right tackle Lane Johnson also left with an ankle injury.

And the Giants still found a way to lose — namely because their offense couldn’t piece together anything close to resembling a competent drive in the second half. After halftime, the Giants didn’t run more than four plays on any of their six drives (not counting their kneel down at the end of regulation), punting all six times they touched the ball. Eventually, their defense caved as the Eagles ripped off 33 more plays than the Giants and nearly doubled them up in time of possession.

As for Barkley, he hasn’t looked quite the same since coming back from his high ankle sprain. Before he suffered the injury in Week 3, he was averaging 6.4 yards per carry (small sample size alert). Since he returned in Week 7, he’s averaged 3.2 yards per carry (in a far bigger sample). On Monday night, he got outplayed by Eagles running back Boston Scott, a former sixth-round pick — almost as if teams can find good running backs anywhere and shouldn’t ever draft a running back with the second-overall pick, but I digress.

Barkley’s run in New York will obviously extend past this season. He’s going to get the chance to help turn things around, along with rookie quarterback Daniel Jones. But there’s a very good chance they’ll be playing under a new coach next season. As the losses mount, it looks less and less likely the Giants can afford to bring back Pat Shurmur. According to ESPN’s Jordan Raanan, “expectations around the league” are that Shurmur will be fired (and that general manager Dave Gettleman could lose his job too).

“I know it’s a place we can win big,” he said. “It’s the Giants. We’re one of the best organizations in the world. The way that we operate, we have a winning culture inside. We’re just not doing it on Sundays. It makes no sense to me — at all actually.

“But I believe that it’s going to turn around, and when it does, it’s going to be an amazing story. For that to happen, we’ve got to find a way to win a game.”