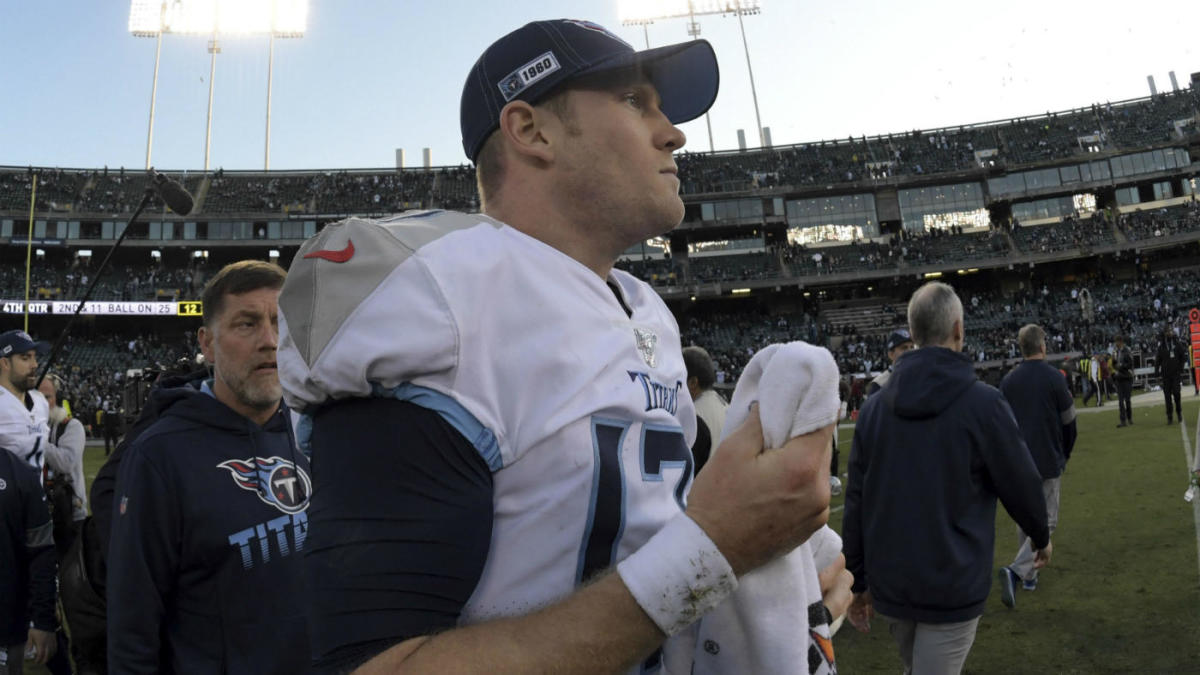 Sometimes people just need a change of scenery to blossom. It’s sure working out well for former first-round pick Ryan Tannehill, who went from a discarded Dolphin to a thriving Titan in the span of less than nine months after an offseason swap. Tannehill is en route to getting a hefty new contract from Tennessee and, were it not for Lamar Jackson, might viably be the Most Valuable Player in the NFL this year.

The argument for Tannehill in that regard isn’t just his stats. They are very good. But there’s also the “replacement level” factor here. The Titans offense has been night and day since Tannehill took over for Marcus Mariota. Tannehill is playing the way we thought he could when the Dolphins took him ninth overall in 2012 and he’s uncorking the upside everyone thought Mariota had in this offense.

Tannehill took over in Week 7 for Mariota. Arthur Smith’s offense has erupted and Derrick Henry has been unlocked. In that stretch, the Titans have scored the second most touchdowns in the NFL and the second most points per game (31.4) in the NFL.

Week 14 is almost in the books and there’s a lot to go over. Fortunately Will Brinson, John Breech, Ryan Wilson and Sean Wagner-McGough are here to break everything down on the Pick Six Podcast. Listen below and be sure to subscribe right here for daily NFL goodness fired into your eardrums.

It’s not as if the Titans are asking Tannehill to be a volume passer who carries the offense. He’s averaging just 26.7 pass attempts per game over this seven-game stretch. Tannehill is putting up great numbers, but he’s largely being efficient while stretching the field more frequently than ever in his career and mixing in extremely opportunistic rushing attempts. He’s a different quarterback than the tentative checkdown artist we saw in Miami.

Maybe it was Adam Gase’s system. Maybe it was Tannehill feeling the weight of his place in a long line of would-be Dan Marino successors. It’s entirely possible the psychological freedom of coming off the bench in a new city, playing in a contract year, and having pressure-free time to immerse himself in the offense just let everything click.

At some point this season, Tannehill will cross through the 100-start barrier for his career. It’s easy to forget he entered the league in 2012 as a first-round pick with questions about his experience at Texas A&M, where he spent time as a wide receiver before transitioning to quarterback.

It’s just hard to explain, because he’s a different quarterback. He’s going vertical with an unparalleled aggression, like on this throw from his own end zone to emerging rookie wideout A.J. Brown.

You could easily argue he underthrew Brown here, but he also managed to make this throw — which was about 45 yards in the air and hit Brown in a spot where he could keep running vertically — without the use of his legs. He basically torqued it all the way out there. Tannehill later said he saw the safety squat underneath, so he knew he’d have Brown in a one-on-one situation. Get it out there deep and if Brown beats the cornerback it’s going for six. It was a great combination of mental and physical approach, while trusting your wide receivers.

Tannehill’s adjusted yards per attempt of 10.19 is tops in the NFL. His previous career high was 7.3 ANYA. His average Intended Air Yards this season is 9.2 yards, behind only Matthew Stafford, Jameis Winston, Russell Wilson and Dak Prescott. Mariota’s number: 7.4. This is a different quarterback and a different offense right now.

The comfort level with Tannehill in this offense and Smith’s play calling has resulted in a change of pace too. As Establish the Run’s Pat Thorman noted, the Titans moved from 27th in seconds-per-snap pace to 12th and have *tripled* their no-huddle rate, up from 7 percent to 23 percent.

Under Mariota, this was a plodding, lethargic offense that couldn’t stretch the field. Under Tannehill, it’s a much faster, aggressive offensive attack.

Oh yeah and Tannehill can TACKLE too. He “threw” an interception early in this game that was nearly a FGTD going the other way and then decided to make a daggum play on defense. Wait for it … wait for it…

Henry is now on pace — if you simply extrapolated Tannehill’s starts to 16 games — for 313 carries, 1,890 rushing yards and 23 rushing touchdowns for a full season. It’s remarkable how Tannehill stepping under center has altered his performance. Henry came on like gangbusters last year, too. Taylor Lewan missed games early. The schedule’s been a little softer. But there’s no question the threat of Tannehill to run or throw vertical helps Henry out in these spots.

The Titans are in the middle of a major heat check, getting ready to host the Texans, also 8-5, for the rights to first place in the division. There might not be a more fascinating story than Tannehill, who would legitimately deserve a look in the MVP race in many other seasons. He’ll just have to settle for being the most valuable offseason addition and landing some monster contract from the Titans instead.

Game of the Year of the Week

The 49ers-Saints matchup on Sunday was a rollicking good time, a 48-46 San Francisco victory over New Orleans, that featured roughly 347 out of control plays in a back-and-forth affair that dramatically shifted the power structure of the NFC.

Two plays that stand out? First was the touchdown pass from Emmanuel Sanders to Raheem Mostert, a trickeration special cooked up by Kyle Shanahan in a moment where the 49ers had to have a score, trailing 27-14 and with the Saints starting to pull away a bit.

The pass from Sanders put him in elite company: he’s one of just three non-quarterbacks ever to record a passing and receiving touchdown in the same game multiple times. Sanders was the last person to do it in a single game, back in Week 7 of the 2018 season, and now he, Odell Beckham, LaDainian Tomlinson and Walter Payton are the only four players to ever do it more than once in their respective careers.

Sanders is also just the sixth player since 1950 to record 100 receiving yards, one receiving touchdown and one passing touchdown. He’s the only player to do so in multiple games.

Another play that stood out was one that doesn’t carry any historical significance, but one that does sort of showcase the identity of the 49ers, was George Kittle’s fourth-down catch with 36 seconds left to set up the game-winning Robbie Gould field goal.