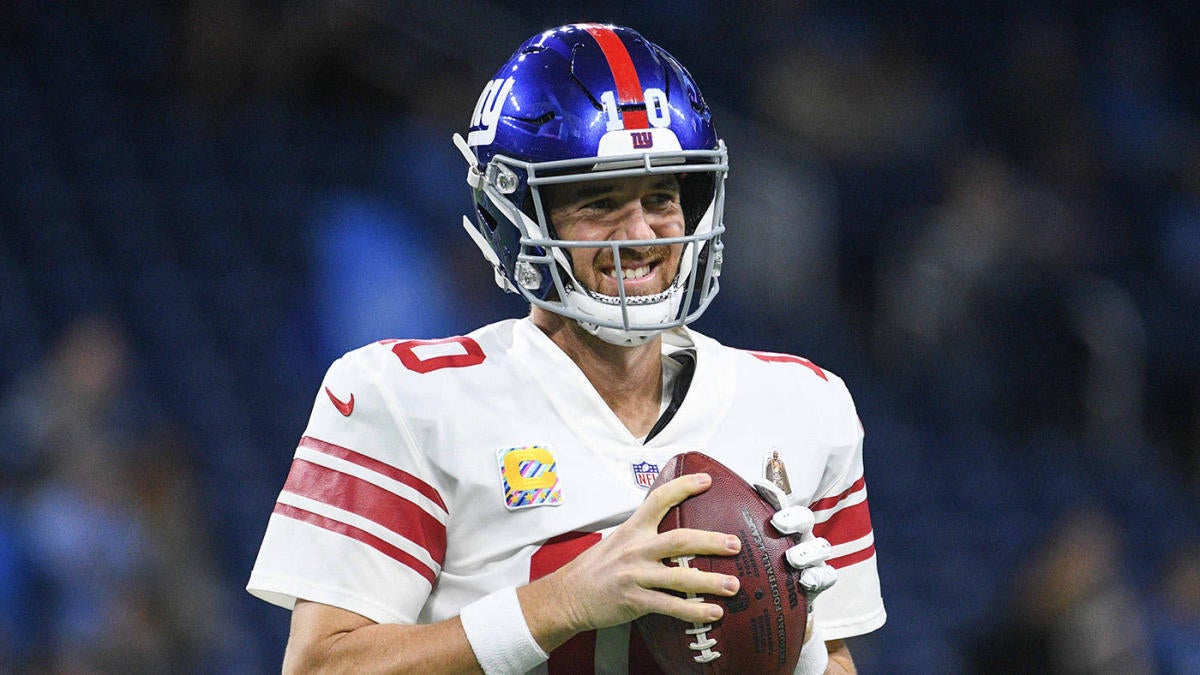 The Philadelphia Eagles are only 5-7, but they still have a pretty good shot at getting themselves into the playoffs, thanks to the recent struggles of the Dallas Cowboys. The Boys have lost three consecutive games, giving the Eagles an opening to push themselves into a tie for the division lead if they can defeat the New York Giants on Monday night.

Dallas would still hold the edge at the moment thanks to the tiebreaker, but the Eagles have the opportunity to take that edge away when the two teams meet again in Week 16. But let’s not get ahead of ourselves here. The Eagles still have to get themselves a win over those Giants. Let’s break down the matchup.

When the Eagles have the ball

Carson Wentz is not exactly lighting it up this season. His completion percentage is down from 69.6 percent a year ago to just 62.4 percent this season. His yards per attempt average has dipped from 7.7 to 6.5, his bad throw rate at Pro-Football-Reference has spiked from 14.4 percent to 19.0 percent, and while he has kept his interception rate steady, his touchdown rate continues to drop off from where it was during his MVP-caliber season back in 2017.

Wentz has not been helped out by his supporting cast, what with his receivers sporting a sky-high 4.9 percent drop rate — second in the league to only division rival Dak Prescott. The loss of DeSean Jackson, who was limited to 65 snaps on the entire year, has robbed the Eagles of a badly needed speed element in their offense and has thus neutered their ability to throw the ball downfield. Only 12.7 percent of Wentz’s throws have traveled 20-plus yards in the air, per Pro Football Focus, and his 65.9 passer rating on those throws ranks just 23rd among 27 qualifying quarterbacks. It doesn’t help that his receivers have dropped six such passes, but Wentz has also thrown five of his seven picks this season on downfield shots.

Luckily for Philadelphia, the Giants’ pass defense has been the cure for just about every quarterback’s struggles this season. New York ranks just 30th in Football Outsiders’ pass defense DVOA, as well as 28th against throws to the left, 23rd against throws over the middle, and 25th against throws to the right. They’re 25th against short throws and 28th against deep throws. Defenses have picked on rookie cornerback DeAndre Baker all season: his 135.3 passer rating allowed on throws in his direction ranks 171st out of the 175 cornerbacks and safeties who have played at least 200 snaps in coverage this season, per Pro Football Focus.

Baker most often aligns on the defense’s left side of the field, and if he does not get the shadow treatment from Janoris Jenkins, the Eagles would be wise to line Alshon Jeffery up across from Baker as often as possible. Otherwise, it will likely be Nelson Agholor and J.J. Arcega-Whiteside working against Baker and slot man Grant Haley, who has not been much better than Baker this season. Haley’s 114.2 passer rating allowed ranks 147th among the same group of 175 players who have been on the field for 200-plus passing snaps this season, per PFF.

Injuries an ineffectiveness at the receiver position have led to the Eagles using more 12 personnel this season in order to get both Zach Ertz and Dallas Goedert on the field. Philly has used two tight ends on 43 percent of its snaps, per Sharp Football Stats, by far the highest rate in the league. The Giants have faced only 48 passes out of 12 personnel all season, according to Sports Info Solutions, so it’ll be interesting to see how they deal with that grouping when the Eagles bring it onto the field.

Philadelphia can also challenge the Giants with Miles Sanders out of the backfield. Sanders has taken over as the team’s clear lead back in recent weeks, playing at least 85 percent of the team’s snaps in three consecutive games. The first time he did so was the first time an Eagles back had ever played that often during Doug Pederson’s coaching tenure, giving you an idea of how strongly they feel about Sanders being their best back right now. Sanders has caught only 10 passes in those three games, but he showed an ability to make big plays out of the backfield earlier in the season and has the kind of dynamism to hurt a team that devotes too much of its attention elsewhere.

The Giants are far better at stopping the run (11th in DVOA) than they are against the pass, and while the Eagles have looked pretty good running the ball at times this season, it is so overwhelmingly clear that the best way to beat the Giants is by throwing on them — which just about everybody has done with great success — that it’s almost not even worth doing a run-game breakdown. Why would the Eagles bother until they have the game in hand?

When the Giants have the ball

Eli Manning is back, y’all! It’s tough to say with any degree of confidence how Manning will perform coming off of the first extended absence from the lineup of his NFL career. Manning had sat out just one game in the 16 years since he became the Giants’ starter before he was benched for Daniel Jones earlier this season, and even then he was reinstalled as the team’s starter the following week. It’s likely that Manning will resume being the same quarterback he always was, but there’s no telling how such a long stretch on the sideline might have affected things.

While the focus of in-game observers — and almost certainly, the broadcast itself — will presumably be on Manning’s individual performance; for the purposes of analyzing the matchup, it feels more appropriate to focus on his supporting cast, and how it matches up with this Philadelphia defense.

The Giants look like they will have their full complement of wide receivers for the first time in a while. Golden Tate is no longer in the concussion protocol, so he, Sterling Shepard, and Darius Slayton are all expected to be active for this game. Both Tate and Shepard are primarily slot receivers, so it will be interesting to watch which of them the Giants try to align inside and matched up against Eagles nickel corner Avonte Maddox more often. Slayton has spent most of his team lining up on the offense’s left side of the field, where he’ll match up with right corner Ronald Darby — the Eagles’ best perimeter defensive back. Whoever aligns to the right side of the field will see a whole lot of Jalen Mills.

This has been a fairly easy defense for offenses to throw on pretty much all season. The Eagles rank 15th in Football Outsiders’ pass defense DVOA, but a cursory glance at more granular numbers shows there’s no real strength of the secondary this year. They rank outside the top 10 against throws to the left, middle, and right side; against short throws and deep throws; and against No. 1 receivers, No. 2 receivers, slot receivers, and tight ends. The pass defense ranks third in DVOA on second downs, but 20th on first down and 28th on third and fourth.

The strength of the pass defense was supposed to be the pass rush, but a cavalcade of injuries has turned the Philly defensive line from one of the deepest, most versatile, and best units in the entire league to merely an above-average one. The Eagles rank 10th in pressure rate this season, according to Pro-Football-Reference, and only 14th in sacks. New York’s offensive line has allowed pressure at the second-highest rate in the league, though, so there will presumably be opportunities for the Eagles to disrupt Manning’s rhythm. He was not exactly all that successful when hurried in the pocket over the past several seasons, and it seems unlikely that time watching Jones on the sideline has suddenly turned him into a player who will be better able to deal with pressure.

The Giants have wanted throughout the season to base their offensive attack around the exploits of running back Saquon Barkley, but he has just not looked like the same player since returning from the ankle injury that sidelined him for three-plus weeks earlier this season. In two-plus games prior to the injury, Barkley gained 311 total yards on just 48 touches — an average of 6.48 per touch.

In his six games since returning to action, Barkley has 524 total yards on 127 touches, an average of 4.13 per touch. He’s exceeded 4.0 yards per carry in only one of six games and he hasn’t rushed for more than 83 yards in any of the six contests. His longest run is just 22 yards, and only two of his 100 carries have gone for 20 or more. (He had 16 such runs on 261 carries as a rookie.) He doesn’t appear to have the same burst or ability to put his foot in the ground, cut, and explode upfield. And understandably so. High-ankle sprains are not the type of injury players are supposed to come back from within just three weeks. Considering the quality of Philadelphia’s run defense this season, it seems unlikely that Barkley will suddenly break out on Monday night.