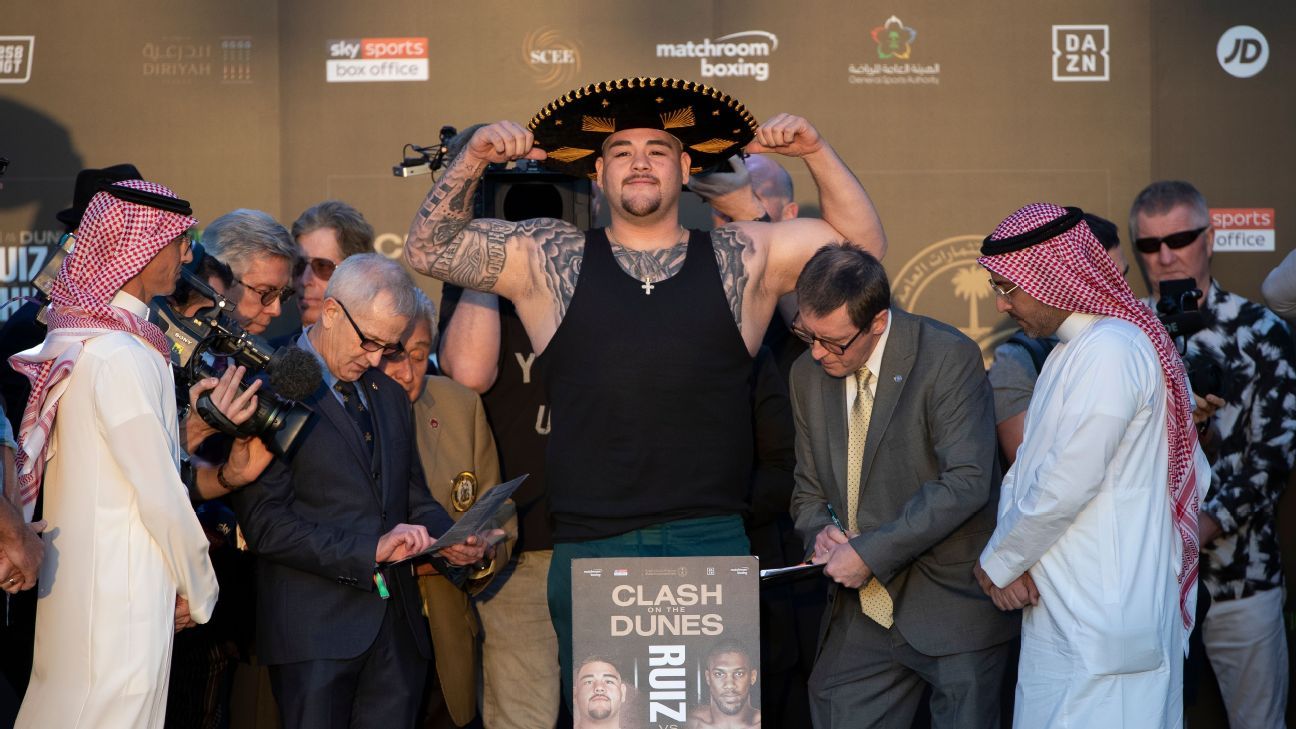 When Andy Ruiz Jr. knocked out Anthony Joshua in the seventh round to take his three heavyweight world title belts in a massive upset June 1 in New York, few had given him a chance because of his chubby physique compared with the muscled Joshua.

Ruiz, never a body-beautiful kind of fighter, weighed a fleshy 268 pounds for that bout, which he had taken on a month’s notice.

Throughout the buildup to the rematch, Ruiz and his trainer, Manny Robles, have been peppered with questions about how heavy Ruiz would be this time around. Robles wanted him to come in weighing in the 250s since they had a three-month training camp to prepare, but he eventually relented and said as late as a media teleconference with American reporters on Thursday that Ruiz likely would be 268 pounds once again.

Instead, Ruiz, the first fighter of Mexican descent to win a heavyweight world title and the underdog once again, was nowhere close at Friday’s weigh-in, which took place outdoors at the fight hotel in Riyadh, Saudi Arabia, a little more than 24 hours before he and Joshua meet in an immediate rematch in one of the year’s biggest fights.

Granted he was wearing a shirt and sombrero on the scale, but Ruiz (33-1, 22 KOs), 30, of Imperial, California, weighed a staggering 283.7 pounds. It is the heaviest that Ruiz, who is generously listed at 6-foot-2, has weighed in at during his 10-year career since he was in the mid-290s for his first two professional fights.

“They made us wait until 4:30, almost 5 p.m. here. I already had ate breakfast, lunch and dinner. I had on a sombrero and all my clothes,” Ruiz said. “A lot of people are saying that I came overweight or this and that. We had to wait so long. I probably put on like 10 pounds just eating and drinking normally today.”

No heavyweight has ever entered a title defense heavier except for 7-footer Nikolay Valuev, who was at least 310.75 pounds for each of the defenses he made over two title reigns in the 2000s.

“We were lighter during camp, but then I thought being the same weight or heavier would be an advantage,” Ruiz said. “We did so many 12 rounds of sparring, so the conditioning is still there.”

“It could be good; it could be bad,” Ruiz said of Joshua’s weight. “He could lose his pop since he’s lighter. But since I am bigger now, I can move him around more and hopefully have some extra pop on my punches.”

The rematch will take place on Saturday (DAZN, noon ET, main event at approximately 3:45 p.m. ET) on the outskirts of Riyadh in Diriyah at a temporary 15,000-seat open-air stadium constructed over the past six weeks specifically for the first heavyweight world title fight to take place in the Middle East.

In other fights on the main card: