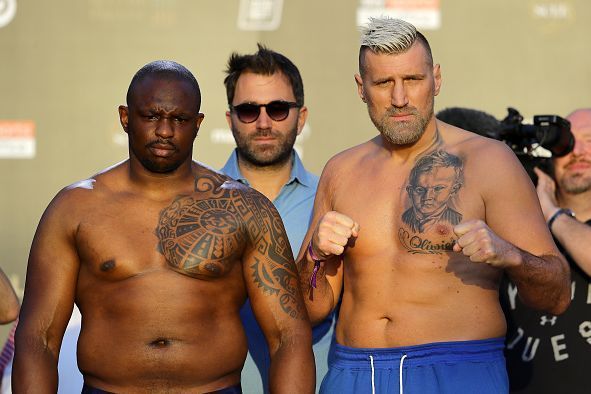 United Kingdom Anti-Doping on Friday announced that it has withdrawn a doping violation against British heavyweight contender Dillian Whyte.

The ruling was issued 24 hours before Whyte is scheduled to step into the ring to fight former world title challenger Mariusz Wach of Poland on the undercard of the heavyweight title rematch between Andy Ruiz Jr. and Anthony Joshua on Saturday in Diriyah, Saudi Arabia.

“For those who believed in me I won’t forget you. To those who didn’t, I won’t forgive you and I know who you are,” Whyte wrote on social media after the ruling was made public.

Whyte’s participation in Saturday’s fight had been widely viewed as controversial because the doping case was still pending, but it has now been dropped.

In his most recent fight, on July 20 in London, Whyte (26-1, 18 KOs), 31 of England, rallied from a ninth-round knockdown to win a unanimous decision over Oscar Rivas to claim the WBC’s vacant interim heavyweight title. However, Whyte was allowed to fight by British regulators despite having failed a prefight drug test.

During the week of the fight, the results of a random test conducted by UKAD, which oversees drug testing in the United Kingdom, came back positive for the banned steroid dianabol in his A sample. It remains unknown if Whyte asked for his B sample to be tested.

UKAD, for reasons never made clear, allowed Whyte to face Rivas. The Rivas camp was never told about the failed drug test, angering the fighter and his team.

“UKAD initiated an investigation with which Mr. Whyte cooperated fully,” UKAD said in its statement. “UKAD has accepted the explanation provided by Mr. Whyte and, in accordance with the UK Anti-Doping rules, the charge against Mr. Whyte has been withdrawn.

“This would ordinarily mean that UKAD would not make any public statement, in accordance with the applicable confidentiality rules to which UKAD is subject. However, since certain confidential information relating to this matter (including the fact of the initial charge) has unfortunately made its way into the public domain, UKAD and Mr. Whyte have agreed to take the unusual step of releasing the following limited information to put an end to speculation concerning Mr. Whyte’s status.”

UKAD released some details of the case, saying “There is nothing in Mr. Whyte’s longitudinal urinary profile to suggest that he has used steroids” and that “the levels of the metabolites found in Mr. Whyte’s 20 June 2019 sample were extremely low.”

Also, UKAD said that Whyte, who was also being tested by the Voluntary Anti-Doping Association for the bout, provided a urine sample to VADA on June 17 that was negative, as were other tests in June and July.

“In light of the above points, the trace amounts of metabolites found in the June 20, 2019 sample are consistent with an isolated contamination event, and they are not suggestive of doping,” UKAD said. “Having rigorously scrutinized and investigated the detailed factual and scientific evidence provided by Mr. Whyte, UKAD is satisfied that the presence of the very low amounts of metabolites in his June 20, 2019 sample was not caused by any fault, negligence or wrongdoing on Mr. Whyte’s part and, given the circumstances, could not have affected the fight between Mr. Whyte and Mr. Rivas.”

Following the July 20 fight, WBC withdrew its recognition of Whyte as its interim titleholder but said if he was cleared he would be reinstated, which now appears likely. More significantly, he would reassume his position as the mandatory challenger for the winner of the Feb. 22 rematch between WBC titlist Deontay Wilder and lineal champion Tyson Fury.