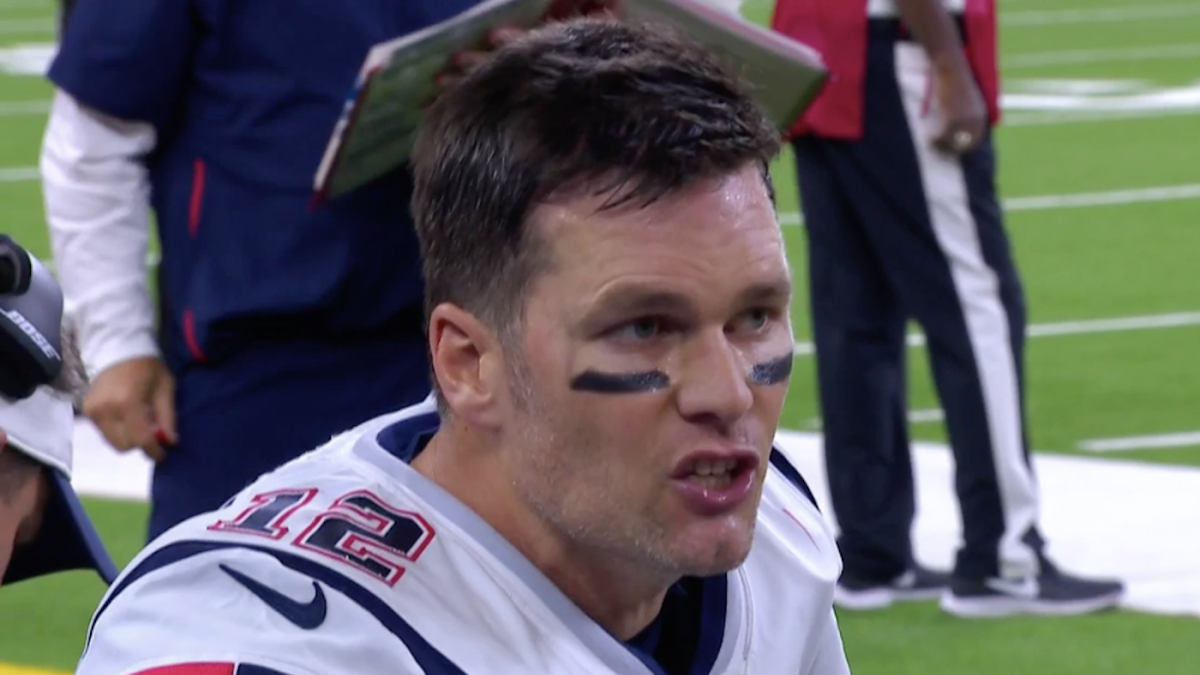 It’s been a frustrating year for the Patriots offense, and so far, Tom Brady hasn’t really tried to hide that fact that he hasn’t been happy with how his team has been playing.

During the first half of the Patriots’ 28-22 loss to the Texans on Sunday, New England’s offensive struggles were on full display as Brady only threw for 54 yards in a half where the Patriots totaled just three points. At one point in the second quarter, NBC cameras caught Brady scolding some of New England’s receivers, who were struggling to get open against the Texans secondary.

As you can see below, Brady clearly wasn’t thrilled with how his receivers were playing up to that point.

During an interview with Westwood One Radio this week, Brady admitted that he was in fact chewing out his receivers, be he also said that no one should be surprised by that, because it’s something he does all the time.

“I do that quite a bit in practice,” Brady said. “I know they don’t always pick it up when I do speak, but I speak a lot in meetings and [on the] practice field, and certainly in the games, and in the huddle. I’m just trying to communicate what I see. A lot of other guys are doing the same thing.”

One interesting thing about Brady’s tirade is that he didn’t throw a single pass to N’Keal Harry for the rest of the game after it happened. The Patriots quarterback did target Harry in the first quarter, but that pass got intercepted, leading some to believe that Brady wasn’t comfortable throwing the ball to Harry anymore in the game.

Brady was actually asked about that during an interview with WEEI this week, and he said that if he phased Harry out of the offense after the interception, it was simply by chance.

“I would never think that way — ‘I am done with him’ — or … that is crazy,” Brady said. “A quarterbacks responsibility is to lead and motivate. We’re often the voice of a lot of situations. First, we’re calling plays in the huddle and B, we have a lot of information because we talk with the coaches and coordinators with what we’re trying to do. We’re trying to motivate people and get people to play their best.”

Despite his clear frustration with the receiving corps on Sunday, Brady did say that he’s happy with the effort that his guys have been giving, even if that effort hasn’t led to much offensive production.

“Guys are trying. I have no problem — I love playing with Phillip Dorsett,” Brady said. “I love playing with N’Keal. N’Keal is working his tail off. He hasn’t had a lot of opportunities out there and he’s learning as he’s going. To expect someone to go out in their third game of the year and be perfect, I think that is unrealistic for anyone. I love what N’Keal is bringing. We’re gaining confidence every week. I love what Jakobi (Meyers) is doing. We’re gaining confidence every week. Gaining confidence with Mohamed (Sanu). Julian (Edelman) and I, we’ve played together for a long time and I think that shows itself pretty well. I think you see, James (White) and I, we’ve played together a long time.”

The fact of the matter is that, besides Edelman, Brady is working with a group of receivers that he’s doesn’t have great chemistry with just yet, and it’s been showing on the field.

“That is part of our sport is dealing with new situations and try and deal with them the best way you can and this team has faced some unique ones in of itself just like any team has,” Brady said. “We’re no different from any team.”

After 13 weeks of watching the Patriots offense struggle, Brady was asked if frustration is finally starting to settle in for him, and he answered the question without exactly answering the question.

“We’ve lost games in the past, I’ve lost games in the past, and as much as it hurts to lose, you just have to keep it in perspective and realize the place where we’re at in the season,” Brady said. “You can’t let it discourage you from waking up the next day and working hard, and hopefully, it refocuses us and makes us work even harder. Any time you come up on the short end, you realize that everyone could do a better job.”

Whatever issues the Patriots are having, they’re going to need to get them fixed soon, and that’s because they’re likely going to need to put up some points on Sunday to keep up with the Chiefs, who have one of the best offenses in the NFL. The Chiefs are averaging 29.0 points per game on the season, which ranks third in the NFL.

The Chiefs and Patriots will be kicking off from Gillette Stadium at 4:25 p.m. ET on Sunday in a game that will be televised on CBS.