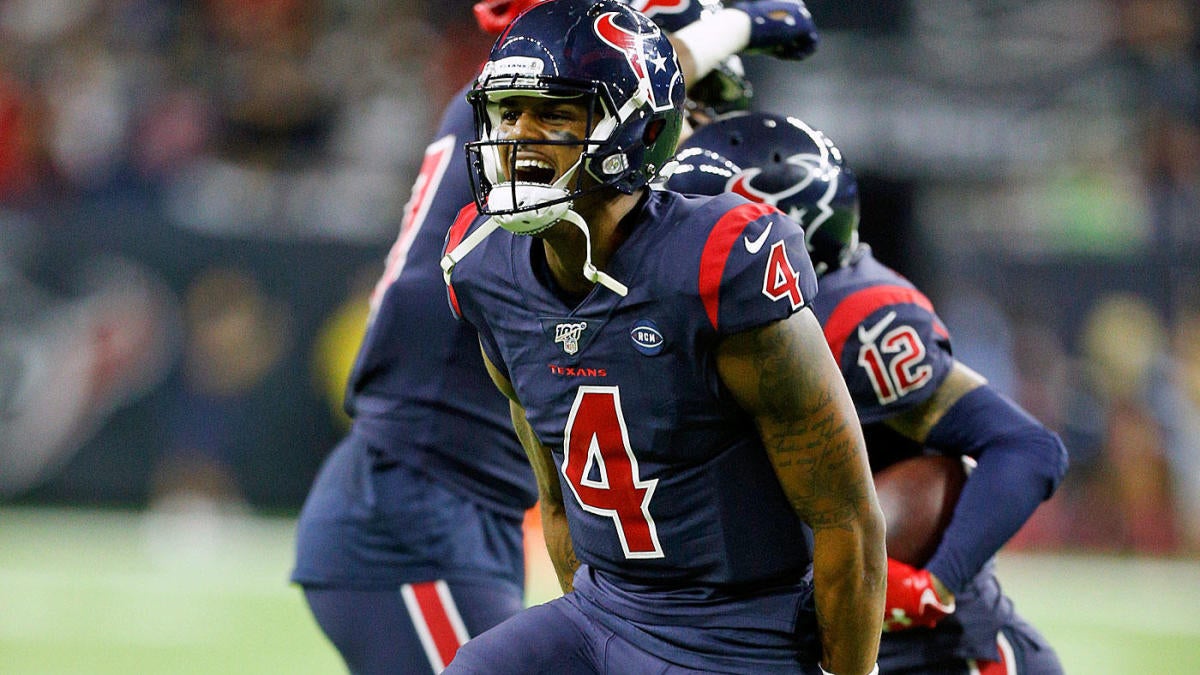 It’s probably too late for a third candidate to enter the MVP conversation in a serious way, but if you are looking for a third candidate to shake up the two-man race between Lamar Jackson and Russell Wilson, look no further than Deshaun Watson. With a four-touchdown performance in a convincing win over the Patriots on Sunday night, the Texans quarterback, who has been on the fringes of the MVP race for much of the season, is mounting a late charge.

Welcome to our Week 14 MVP check-in, where five writers here at CBS Sports — Will Brinson, John Breech, Jared Dubin, Ryan Wilson, and Sean Wagner-McGough (hi, that’s me) — all ranked their top five MVP candidates to this point in the season. It should come as no surprise to learn that Jackson earned all five first-place votes for a second-straight week after he took down the 49ers. It should, however, come as a surprise to learn that Wilson did not secure all five second-place votes. On one person’s ballot, Watson usurped Wilson. On the other four ballots, Watson landed in third place.

One week ago, Watson collected only eight total points after we added up all five of our ballots to form one collective ballot. That was only good enough to place fourth overall. This week, Watson doubled his total, surging all the way up to 16 points. He’s firmly in third place behind only Jackson and Wilson. The question now becomes, does Watson have any chance of actually catching Jackson or Wilson?

First, let’s look at how the three of them compare statistically.

Clearly, Jackson holds an advantage over both Watson and Wilson — and yes, we should add that Jackson has the better supporting cast in terms of his offensive line and coaching, but we can’t exactly hold that against him, and it’s not like Wilson and Watson are throwing the ball to no-name receivers.

Looking at the Texans’ remaining schedule, Watson doesn’t really have the kind of matchups needed to seriously dent Jackson’s lead. They finish the season against the Broncos, Titans, Buccaneers, and Titans. None of those games are scheduled for primetime. While those dates with the Titans hold huge implications in the race for the AFC South crown, it’s the AFC South — the NFL‘s version of Dorne. Sure, it exists and we’re sure something is happening down there, but we’d rather not spend our time there when far more interesting stuff is happening to the north, east, and west.

Don’t underestimate how much the schedule matters in the MVP race. Beating the Patriots is the only reason Watson got himself back into the MVP discussion. Jackson only overtook Wilson in the race after he beat the Patriots and their top-ranked defense, the Texans and Watson, the Rams in primetime, and the 49ers and their second-ranked defense. Beating the Titans, even though they’re playing well with Ryan Tannehill, just doesn’t have the same ring to it.

All of this is just a long-winded way of saying that Watson almost certainly won’t snatch MVP away from Jackson or Wilson. To be completely frank, it’s getting more and more difficult to believe that Wilson could catch Jackson, who continues to pad his lead. Unless Jackson gets hurt or suddenly hits a rough patch, he should run away with the award. The NFL can change drastically in a single week. The race isn’t officially over. If Jackson struggles and Wilson, say, lights up the 49ers in Week 17 to win the NFC West and conference, the order could flip. But after 13 weeks, this very much remains Jackson’s race to lose. And it just doesn’t look like he’s going to give it away. That’s not an insult to Wilson or Watson, both of whom are playing at an MVP level. It’s a testament to Jackson.

Below, you’ll find our collective MVP ballot that was pieced together by adding up all five of our individual ballots. A first-place vote was worth five points, a second-place vote was worth four points, and so on. Further down below, you’ll find all five of our individual ballots, including brief explainers so you know why we voted the way we did — and also so you know who to yell at.

Prescott dropped from 10 points to four points, which represents the biggest dropoff from last week to this week. It’s also notable that Christian McCaffrey, after receiving one point last week, has been eliminated entirely as the Panthers have gone from playoff hopeful to firing Ron Rivera. Life comes at you fast in the NFL.

Onto the individual ballots.

There’s a pretty huge gap between Lamar and everyone else at this point. It checks all the boxes — he has played exceptional football, his team is winning a bunch of games, he slew the proverbial dragon of the AFC, he just took down the top team in the NFC, and he has electric “MVP moments” we all collectively watched. The Ravens are the most fun team in football to watch right now and it’s because of Lamar Jackson. Russ is probably the only one with an actual shot of walking him down in the final four weeks barring an injury and even that ship might have sailed thanks to the running backs basically carrying the load on Monday night against Minnesota (Russ was good, but not good enough to make up any ground on Lamar). I think Cousins and Dak remain underappreciated and Watson has been incredible this season — his performance against the Patriots didn’t really get its due from Sunday night.

I’ve got the same five guys on here as last week, with Watson’s monster game against the Patriots moving him up the ladder a bit, and Gilmore actually allowing a few catches — albeit to DeAndre Hopkins — bumping him down the line. Jackson wasn’t quite as electric this week in the rain against the 49ers, but he was still really damn good, and he beat one of the best teams in football. Wilson pulled his usual magic on Monday night, and remains one of the most dependable players in the league, wacky pick-six aside. If Mahomes had played the full season, he might be more of a factor in the race.

My ballot is basically the same as the one I had last week. Lamar Jackson is still at the top after leading the Ravens to a 20-17 win over the 49ers. During the game, Jackson showed why he’s a nearly unstoppable quarterback as a quarterback. Even though he struggled to throw the ball (14 of 23 for 105 yards), he still did plenty of damage with his legs, rushing for 101 yards and a touchdown. With 977 yards on the season, Jackson is now just 63 yards away from breaking Michael Vick’s single-season rushing record for a quarterback.

As for Wilson, he’s doing his best to make sure this stays a two-horse race until the end of the season. Like Jackson, the Seahawks quarterback also led his team to an impressive win in Week 13. Wilson threw two touchdown passes in Seattle’s win over the Vikings and now leads the NFL in touchdown passes with 26. As for the other three spots, those are for show only, because none of them have a chance to win MVP. Thomas is the only non-quarterback on my list, and deservedly so. Not only does he lead the NFL in both receptions and receiving yards, but he’s on pace to break Marvin Harrison’s single-season record for most catches, which was set in 2002.

All Jackson does is win, even when the conditions are terrible. On Sunday, LJ8 and the Ravens added the 49ers — the NFC’s best team (at the time, anyway) — to the list of their victims along with the Seahawks, Patriots, and Texans. Watson, meanwhile, had one of his best games of the season against a suddenly vulnerable Patriots outfit, and Wilson, after a slow start on Monday night, led the Seahawks to an impressive home win over the Vikings. Mahomes somehow continues to fly under the radar (he’s the defending MVP!) but could make a late-season push if the Chiefs keep winning, starting this week in New England. And Prescott falls to No. 5 because while the Cowboys were outclassed at home by the Bills on Thanksgiving, his body of work during the 2019 campaign has been impressive.

Same five players, but a slightly different order as Watson’s huge outing against the Patriots bumped him up two spots and Prescott’s two-turnover performance against the Bills bumped him down two spots. Do I think Watson can catch Jackson? Nope. This remains a two-man race and even then, it’s beginning to look like Jackson is in the process of running away with MVP. He already beat Wilson and the Seahawks. And he’s taken down the Patriots and 49ers defenses too. At this point, he’s going to need to suffer a truly bad outing for Wilson to have a chance to overtake him. I wouldn’t bet on that happening.