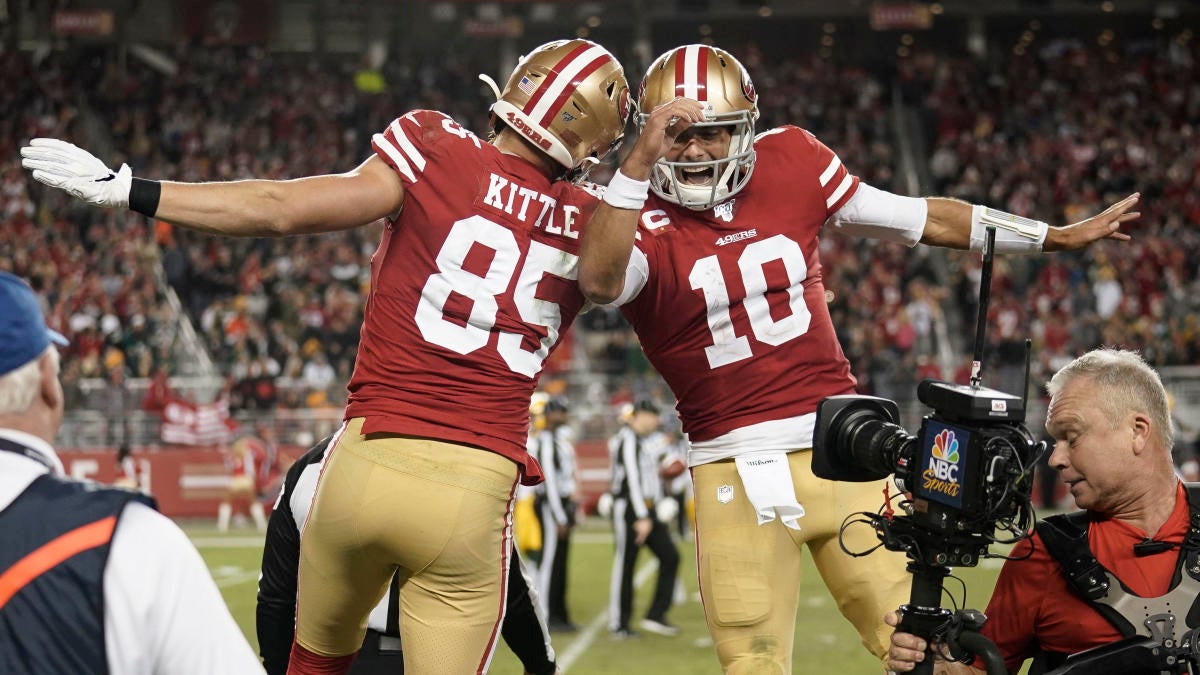 Believe it if you can, but it’s already Week 14 of the NFL season, and that means things are getting heated as teams scratch and claw for the right to play football in January. There are some who are very near clinching their seat at the table, but even they can’t relax with seeding on the line.

The beauty of the NFL is while there are seemingly always the usual suspects making noise in each conference, there’s also the chance one or two teams will barrel through low expectations to put everyone on notice. This season has been no different when it comes to the NFC, where the San Francisco 49ers went from a supposed rebuild to a conference powerhouse in short order, and even their loss to the high-powered Baltimore Ravens did nothing to dissuade what many have finally admitted as true.The 49ers are a force to be reckoned with, and it took a game-winning kick by the Ravens in Baltimore to give them only their second loss of the season — an outcome that could bite them before it’s all said and done.

That is especially true when noting the outcome of “Monday Night Football” in Week 13, when the Seattle Seahawks outlasted the Minnesota Vikings, and the New Orleans Saints riding the shockwaves from that contest right into the top spot.

With only four regular season games remaining, it’s time to see who sits where and, while we’re at it, let’s rank the teams who still have a viable shot at taking one of the two wild-card spots in the NFC — based upon their chances.

It’s the best record in the NFC, but the problem is it’s tied with not only the Saints, but more importantly, the Seahawks — who own the tiebreaker by way of the aforementioned Week 10 outcome. In one fell swoop on MNF, the Seahawks went from No. 5 in the NFC to a division leader, swapping spots with the 49ers and setting the stage for what might be the most potent Week 17 battle in the entire league. San Francisco better not look that far ahead though, because they have the 10-2 Saints up next and might have to run the table to regain the NFC West lead, considering the Seahawks have an easier final four games. At worst, though, the 49ers are a virtual lock to land at least a wild-card spot, and to then battle an age-old playoff foe in the Cowboys come January.

The Vikings have played so well this season they have a great chance to reach up and grab the lead in the NFC North and not leave talk of a wild-card berth behind altogether, but they suffered a setback regarding the former this week. They found themselves squaring off against the Seahawks on “Monday Night Football,” and gave them a run for their money at CenturyLink Field, but lost juice when Dalvin Cook left the field with injury. The loss puts them 1.5 games back of the Packers — having lost to Green Bay in Week 2 — and Minnesota now needs a collapse by Green Bay and a surge of their own to win the division. It’s now more likely they secure a wild-card spot instead of the NFC North crown, unless they’re the ones who suffer a collapse in December.

This isn’t the same team that mowed down opponents in 2018, but they’ve done enough to remain a viable contender for a wild-card spot in the NFC. Their win over the Cardinals in Week 12 was good for both morale and for their conference record, and they haven’t lost two games in a row since early October. What happens in Week 14 will truly tell the tale of their season, though, in a rematch with a Seahawks team they lost to by only one point earlier this year. The Rams have shown they can push the Seahawks to the limit, but Seattle is suddenly in the NFC West driver’s seat, and they know a division loss gives the 49ers a weapon to retake the wheel. All things considered — including the regression of Jared Goff — it feels like Sean McVay will go from being heralded as a football god and appearing in the Super Bowl to missing the playoffs altogether, and in only one year. Spoiler: that’s the NFL, folks.

It’s almost like the Eagles found a way to get broken by their own bye week, having entered it on a two-game win streak only to suffer three consecutive losses following their two week rest. Losing to the Patriots and Seahawks is one thing, but allowing the Miami Dolphins to hang 37 points on you in a week wherein you can regain a share of the NFC East lead is completely another, and it truly puts their back against the wall in December. Their saving grace would be a collapse of the Cowboys, which includes their need to defeat them in Week 15 to force a 1-1 series split. Their remaining schedule, however, is softer than the Bears, Panthers and Bucs, which is why their wild-card chances are better — albeit slim. In the NFC East, it’s win the division or pack up and leave, and the Eagles are falling apart at the wrong time of the year.

Things have quietly begun to turn in the Windy City, with the Bears having won three of their last four games, but there are still obvious questions regarding the potential — or lack thereof — of Mitchell Trubisky. Time will tell if he can lead the inconsistent Bears offense through an absolute gauntlet to finish the year, but it starts with facing the win-needy Cowboys in a game that will help determine both their paths going forward. From there, well, they better pack their rosary beads — asking Trubisky to outplay Rodgers, Patrick Mahomes and Kirk Cousins in a three-week period, immediately after trying to outduel Dak Prescott.

They’re not out of it until they are, and having won three of their last four games, the Bucs simply refuse to lay down and die. It’s a scrappy bunch with enough talent to walk down even the most powerful team in the conference, or enough focus and execution errors to make their own demise inevitable. There’s no in-between for Bruce Arians’ bunch, who could finish at 9-7 if they run the table, but good luck, considering they haven’t won more than two games in a row all season, and that record likely won’t be good enough to get them into the playoffs anyway — even if they did go 4-0 in December.

Much like their rival in Tampa, the Panthers have a chance to mathematically squeeze into the wild-card hunt, but the probability of it happening isn’t great. It’s a team that has now lost four consecutive games and is allowing a robust 29 points per game in each of those outings, and their defense will get zero reprieve going forward. The Falcons already proved they can mop the floor with the Panthers and this time the game is in Atlanta, but even if the Panthers pull out that win, their final three games read more like writing on the proverbial wall than an actual NFL itinerary, and Kyle Allen no longer looks like a Cam Newton successor.

Well, here’s a team that doesn’t have to worry about battling for home field advantage in 2019, barring the most massive three-team collapse witnessed in modern football history. Instead, the Cowboys are fortuitous enough to simply have sole ownership of the top spot in the NFC East, and that’s thanks to how equally unimpressive the Eagles have been. Only one team in the division will get a playoff spot, and the Cowboys must defeat both the Eagles and Redskins in order to ensure it’s them, assuming they lose to the Bears and Rams. Considering the morale boost needed in Dallas, winning three out of four — or running the table — is the goal.

It feels like forever ago when Mike McCarthy was fired and Aaron Rodgers was blamed for it, but that’s all water under the media bridge now, because the combo of LaFleur and Rodgers has helped the offense withstand injury and inconsistency, while their defense continues to hand out billows of smoke to opposing QBs. All they have to do to take the NFC North — while having a shot at stealing home field advantage — is to push through the Redskins and then defeat all three division rivals in a row to finish the year, and that might not be as easy as they think.

At one point this season, the 49ers were the lone undefeated club, but have since dropped two games with one of them being to the Seahawks. Losing to the Ravens then kicked the door open for Seattle — who have now won five in a row — to walk through and take the lead in the NFC West, and they did just that when they defeated the Vikings to match the 49ers record, overtaking the latter because of the win in Week 10. This knocks the 49ers down into the wild card chase for the first time this season, and the two will meet for a rematch in Week 17 in a game that might determine who gets home field advantage, and who will be forced to enter as the No. 5 seed in the NFC — while the Saints enjoy a head-to-head tiebreaker over Seattle.

The loss to the Atlanta Falcons at home stings more than they’d care to admit, and it looms large as they chased the 49ers and attempted to stay ahead of the Packers. Had they defeated a then-discombobulated Falcons team, the Saints would have the best record in the NFC (and NFL), but there’s still a chance the road to the Super Bowl goes through Louisiana, considering they now have the top seed thanks to the Seahawks. All the Saints have to do is keep the good times rolling by figuring out how to defeat the 49ers — a not-so-easy task — to own tiebreakers on both Seattle and San Francisco; and then their final three games will see them enter as favorites to handle business en route to land home field advantage for the second consecutive year.