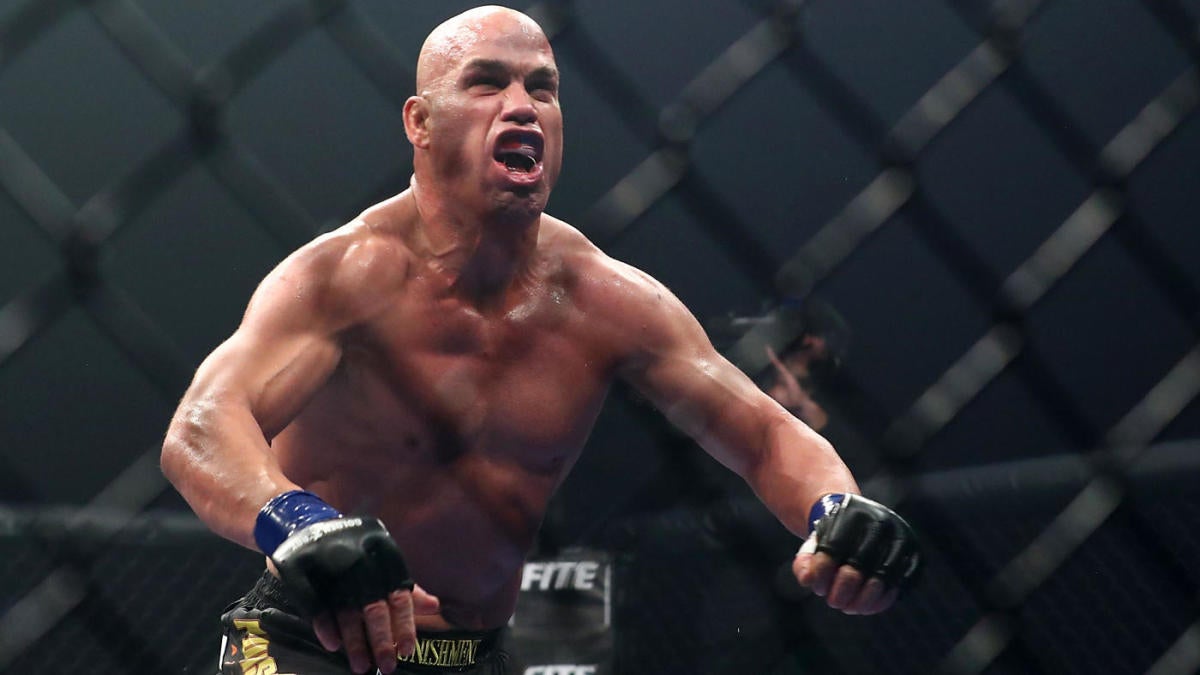 This Saturday features the most pro wrestling tinted fight of the 2019 mixed martial arts calendar when former WWE champ Alberto Del Rio returns to MMA for the first time since February 2010 to face legendary former UFC champ Tito Ortiz under the Combate Americas banner. Del Rio and Ortiz have each found themselves positioned as controversial sideshows for various reasons over the past decade, for better and worse.

Del Rio (9-5) was named the Combate Americas president — though entirely a promotional role — from October 2016 to July 2017 and now will climb into the cage in an attempt to help the brand as well as his complicated legacy, as he explained to CBS Sports’ State of Combat podcast.

“There are many reasons to continue my legacy and continue inspiring Mexicans and Latinos,” Del Rio said. “Showing them and my children, when you dream of something and work hard for it, your dreams come true. That’s one of the reasons. The other one, because I’ve been with this company Combate Americas since day number one. I’ve been seeing these athletes become amazing fighters. I’ve been seeing this company becoming something great. I want to continue helping the company get to the places the company deserves to be because this company has also become my family. I don’t just work for the company, I have a close relationship with most of the people in the company.”

How the 42-year-old Del Rio ended up matched against 44-year-old Ortiz was a combination of opportunity and ambition. Ortiz vs. Del Rio may have been the biggest possible fight for Combate Americas, and the familiarity of both men with having a microphone thrust in front of them was a solid mix on paper, even if many fans felt it drifted too far to the ridiculous.

“We talked about different names and some of them were willing to fight,” Del Rio explained of the decision to fight Ortiz. “When I found out Tito was no more under contract with any organization, I said, ‘Let’s do Tito. Let’s fight Tito.’ That was my one condition, my one and only condition when we started talking about a possible return fight, I said I want it to mean something for the company, for my career and for the fans. I could fight anyone. With the position I have in the company, I could have picked anyone and it would have happened. That would not have brought anything good for myself, for the fighters or for the company. That’s why, in the moment I found out about Tito being free I said ‘Let’s do it,’ and Tito said ‘Yes, let’s do it.'”

For his part, Ortiz, a fighter who has been known to list ailments that hampered him through training camp following losses, says despite his advancing age, he is in peak form heading into the encounter from Payne Arena in Hidalgo, Texas.

“I feel better than I’ve ever felt in my whole career,” Ortiz said. “Once again, it goes back to not having injuries. I do have my sore days, but I make sure I take care of myself. Technology these days is something that I’ve used to my advantage. … When you say 44 years old, I say 44 years young because I feel better than I did when I was in my thirties.”

The pre-fight media tour eventually turned physical when Ortiz gave Del Rio a shove at a media event in McAllen, Texas. While it’d be easy to chalk the physicality up to two men opening up the pro wrestling playbook, there have also been controversial aspects of modern America, immigration and the theoretical wall along the U.S. Mexico border creeping into the fight promotion. When Ortiz delivered a shove, Del Rio says he was caught off-guard, but knew nothing more would come of the situation.

“You know, I was OK with Tito, I wouldn’t say I liked him but I was OK until that day,” Del Rio said. “I’m going to say it again, he talks about stuff that he doesn’t even comprehend. In the moment he finds himself not knowing the answer, he loses his mind. That’s what happened in McAllen. He started talking about stuff and I didn’t agree with him and showed him why. I explained to him why and to our Combate Americas fans and he didn’t have the right response to me instead of pushing.”

Ortiz, a Mexican-American and outspoken supporter of Donald Trump touted the benefits of “the wall” while Mexican-born Del Rio is a supporter of open borders. While that difference of political ideology defined some early promotional talk ahead of the fight, Ortiz says he has put the whole discussion behind him.

“I think it’s just for respect value of him being from Mexico and now he’s a United States citizen and I have Mexican descent in my blood but I’m American at the end of the day,” Ortiz said. “I really don’t want to make it America vs. Mexico because it’s far from that at all. I think we’ve got two Mexican-Americans that are going to fight their asses off and put on a great show for the fans. That’s what it’s about.”

As for what’s next for Ortiz, who seems more committed to future fights than Del Rio? He has another fight on his Combate Americas contract and has dreams of some top-tier opposition.

“You know, I’ll be competing again, I know that for sure,” Ortiz said. “An opponent is up in the air, I’m not really sure but I want to make sure it’s a big name once again. Someone who is a competitor. Is it a Ryan Bader or is it a Cain Velasquez? You know, I’m not sure. Right now, I haven’t really thought past Alberto Del Rio on Dec. 7. That’s all I’ve lived my life up to now. It’s up to that night.”