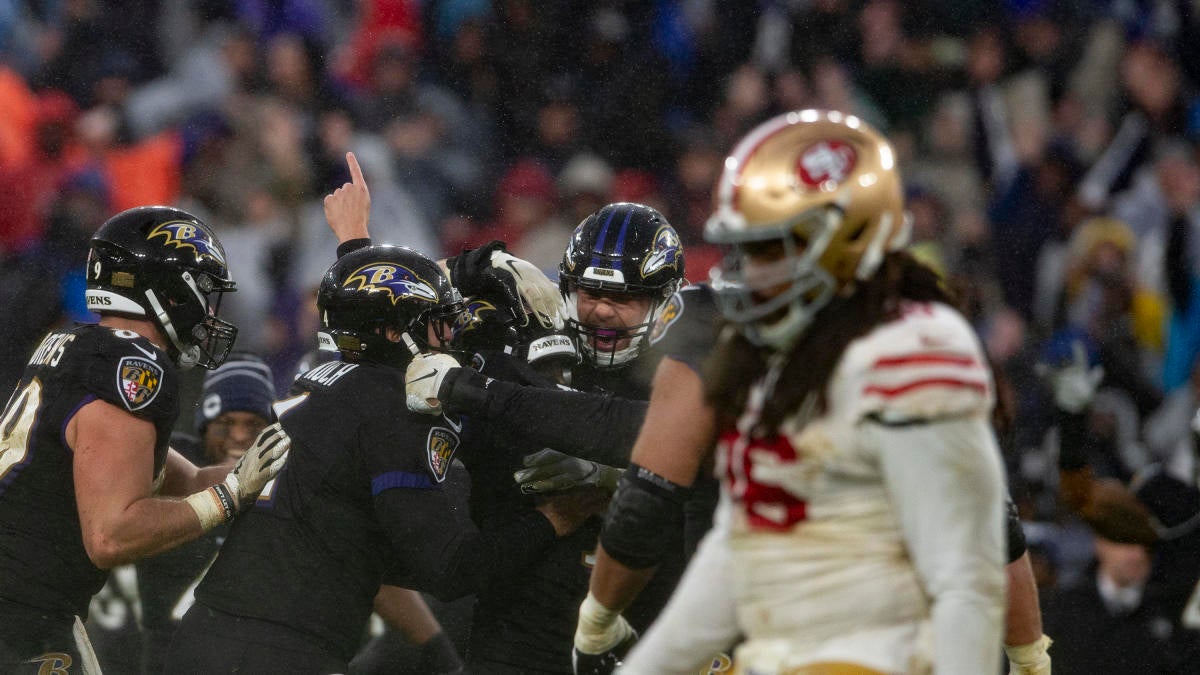 It’s the 13th NFL Sunday of the 2019 season and we’re keeping you updated on all the action and biggest storylines throughout the day. Check back often to find everything you need to know about Week 13.

The common belief is that all kickers are bad in 2019 but Justin Tucker may be the exception to the rule. The Ravens kicker gave Baltimore its eighth win in a row by nailing this game-winning kick at the buzzer against the 49ers on Sunday.

Adam Vinatieri and the Colts lined up with a chance to hit a field goal for a late lead against the Titans, but Tennessee flipped the script by blocking the kick and returning it for a touchdown and a lead of their own.

The snow isn’t keeping Aaron Rodgers from having himself a big day through the air. The Packers quarterback has braved the blizzard and thrown for four touchdowns against the Giants, his latest coming on this toss to Marcedes Lewis.

The Jaguars have not seen things go their way lately and their expensive new quarterback Nick Foles has been benched. That’s bad news for Foles but good news for those of us who enjoyed Minshew Mania earlier this season. Gardner Minshew is back in action and he found the end zone with a touchdown pass that gave the Jags a pulse against the Bucs.

Remember that wild Colts special teams trick play that they tried to run (and failed miserably) against the Patriots all those years ago? Well, the Dolphins went with their own version on Sunday in Miami … and it worked! Without the help of an offensive line (swinging gate formation), the Dolphins punter received a snap and shoveled a pass to the place kicker in the end zone for one of the most bizarre touchdowns you’ll ever see.

We’ve already seen a couple of great fourth down catches already today but this DeVante Parker snag…my goodness. The catch was impressive enough on its own but the Dolphins receiver also managed to control his body enough to stay in bounds and take it to the end zone for six. What a play.

Parker added a second impressive touchdown catch in the third quarter. The man is having himself a day.

Throw in the snow

It’s a winter wonderland at MetLife Stadium with the Giants and Packers duking it out in heavy snow. It’s creating a pretty spectacular scene in Jersey; just have a look at this great throw from Daniel Jones to Sterling Shepard.

Landry lays out on the line

Jarvis Landry’s talent is undeniable and he put it on full display with this sick sideline grab in the first quarter in Pittsburgh. Such great hands and body control showcased here.

It’s a little wet in Baltimore this Sunday but that hasn’t stopped Jimmy Garoppolo from connecting on a nice chuck to Deebo Samuel, who created a little separation before hauling in this first quarter touchdown pass on fourth down.

Duck Hodges is starting for the Steelers this week as they take on the Browns in a big AFC North matchup. The Steelers-Browns rivalry is hotter than ever after the Myles Garrett incident earlier in the season, so this one should be worth keeping an eye on.