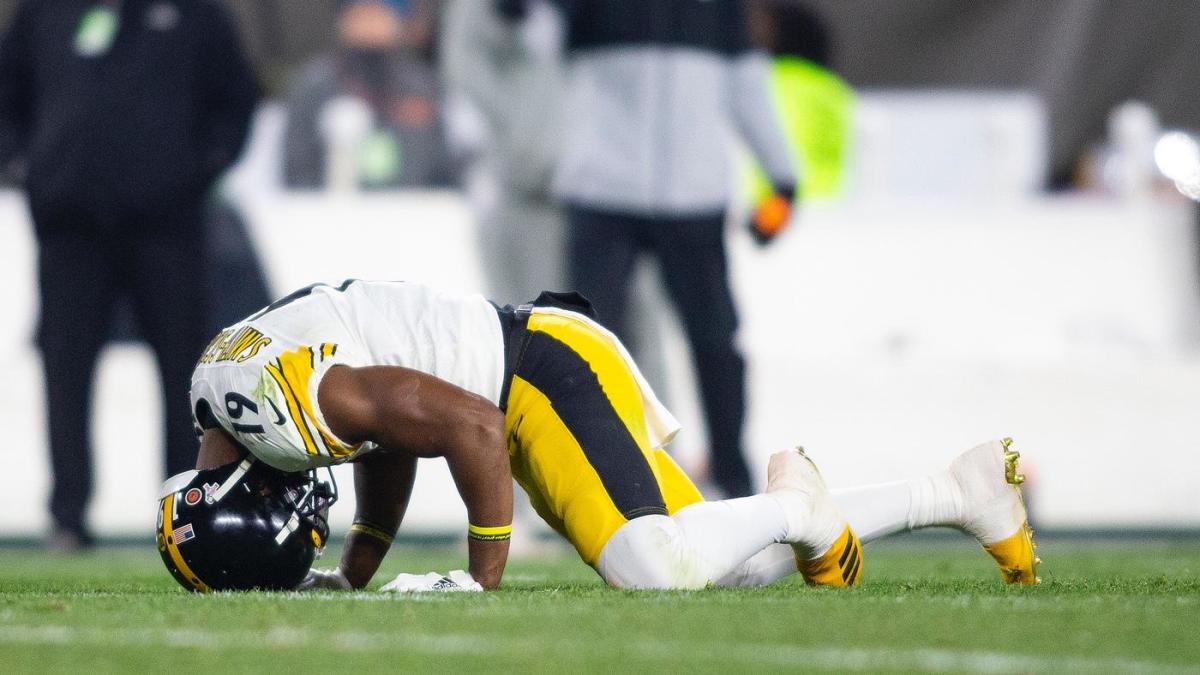 JuJu Smith-Schuster suffered more than a concussion during Thursday night’s loss to the Browns. On Monday, ESPN’s Adam Schefter reported that the Steelers‘ No. 1 receiver also sustained a knee injury on the same play he sustained the concussion. Smith-Schuster’s status for Sunday’s road game against the Bengals is currently uncertain.

The Steelers could be extremely thin at receiver against the winless Bengals. Along with Smith-Schuster, rookie receiver Diontae Johnson’s status for Sunday is also up in the air after he sustained a concussion against the Browns. Third year receiver Ryan Switzer was placed on injured reserve last week after sustaining a back injury in Pittsburgh’s win over the Rams. Earlier this month, the Steelers released veteran wide receiver Donte Moncrief, a 2019 free agent signee that struggled during his brief stint in Pittsburgh.

In response to their recent injuries at wide receiver, the Steelers promoted Tevin Jones to the 53-man roster while also signing Deon Cain, the Colts‘ sixth-round pick in the 2018 draft. On Monday, Pittsburgh signed Amara Darboh — the Seahawks‘ third round pick in the 2017 draft — and Quadree Henderson, an undrafted rookie in 2018 who spent his rookie training camp with the Steelers. Henderson, a special teams standout at the University of Pittsburgh, spent the 2018 regular season with the Giants, catching nine passes in five games and also returning five kickoffs for 112 yards.

The only veteran receiver on Pittsburgh’s roster that is a sure bet to play on Sunday is James Washington, the team’s second-round pick in the 2018 draft. After a largely disappointing rookie season, the former Biletnikoff Award winner has already surpassed last season’s numbers, with 23 receptions for 369 yards and a touchdown through 10 games. Washington has an established rapport with Steelers quarterback Mason Rudolph, as the two were teammates during their days at Oklahoma State. The duo showed off their chemistry in Pittsburgh’s Week 10 win over Los Angeles, with Washington setting career highs with six receptions for 90 yards and a score in the Steelers’ 17-12 win.

Pittsburgh is coming off their ugliest performance since their opening-season loss to the Patriots. After four straight wins, the Steelers scored just seven points while losing to the Browns for the first time since 2014. While Pittsburgh’s defense settled in after a slow start, the Steelers’ offense was stuck in neutral throughout the game. While Pittsburgh’s 27th ranked rushing attack continued its season-long struggle, Rudolph — with Smith-Schuster and Johnson out of the game — struggled as well, throwing four interceptions and finishing with a 36.3 passer rating.

This season has been a tough one for Smith-Schuster, who has assumed the role as the Steelers’ No.1 receiver after Pittsburgh traded Antonio Brown to Oakland this offseason. Through 10 games, Smith-Schuster, who has been routinely double teamed by opposing defenses this season, has caught 38 of 60 targets for 524 yards and three touchdowns. He is on pace to record 838 receiving yards this season, nearly 600 fewer receiving yards than he totaled in 2018, when he earned the Steelers’ team MVP award.

Despite Smith-Schuster and the offense’s struggles this season, the 5-5 Steelers are currently the AFC’s eighth seeded team, behind the 6-4 Raiders and 6-4 Texans. Pittsburgh is currently three games behind the 8-2 Ravens in the AFC North standings and a game ahead of Cleveland for second place in the North.