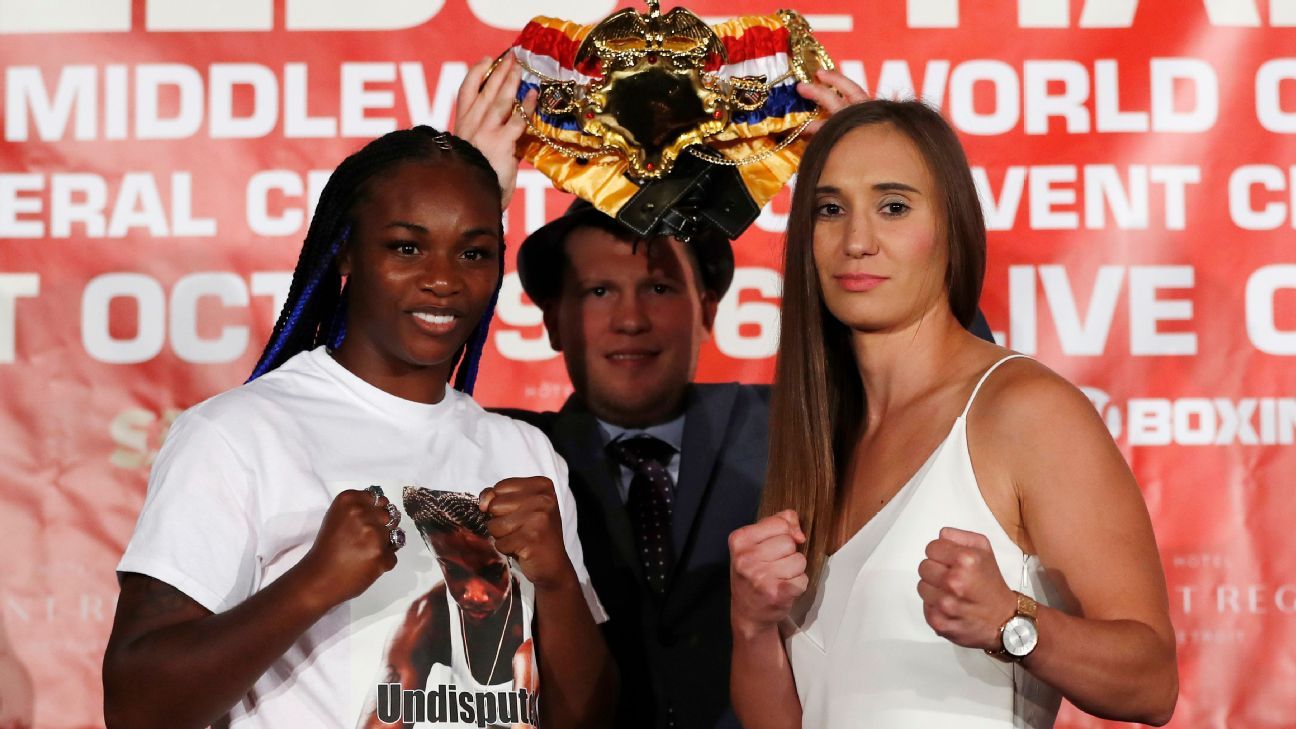 Maybe the third time will be the charm and Claressa Shields and Ivana Habazin will finally get into the ring to fight for a pair of vacant women’s junior middleweight world titles.

The fight was scheduled for the third time on Friday and will take place on Jan. 10 (Showtime, 9 p.m. ET) at the Ocean Casino Resort in Atlantic City, New Jersey, promoter Dmitriy Salita and Showtime announced on Friday.

The fight was originally scheduled to take place on Aug. 17 at the Dort Federal Event Center in Flint, Michigan, Shields’ first bout in her hometown. However, when Shields dislocated her right knee during training in late June, the bout was postponed and eventually rescheduled for Oct. 5 at the same arena in Flint.

But at the weigh-in the day before the bout, Habazin’ trainer, 68-year-old James Ali Bashir, was viciously attacked and seriously injured. He was hospitalized with head and facial injuries and the fight was called off, though the rest of the card proceeded as scheduled. Shields’ brother, Artis Mack, 28, was later arrested and charged with one count of assault with intent to do great bodily harm less than murder in the Oct. 4 attack.

Two-time U.S. Olympic gold medalist Shields (9-0, 2 KOs), 24, who unified two belts at super middleweight and unified all four at middleweight, where she reigns as the undisputed champion, is moving down in weight again, to 154 pounds, so she can try to win a world title in a third division.

If Shields is successful, she will have won world titles in three divisions in fewer fights — 10 — than any boxer in history, male or female. Pound-for-pound king and unified lightweight world champion Vasiliy Lomachenko won a title in his third division in his 12th fight in May 2018.

“My goal is to become three-division champ faster than any man or woman in history,” Shields said. “This is a very significant fight for both of us. We have both trained really hard twice and great opportunities await the winner, so hopefully three times is the charm.”

Habazin (20-3, 7 KOs), 30, a former welterweight world titlist from Croatia who has won five fights in a row, will be fighting in the United States for the first time.

Habazin said she is dedicating the fight to Bashir, though it is not clear whether he will be well enough to be in her corner on fight night.

“I’ve been thinking about this since October and I have more of an incentive now given what happened,” Habazin said. “I feel like I’m fighting for James Ali Bashir, as well as for my own pride and respect. I’m also fighting for my country. I want to make Croatia proud that I am their daughter, and I feel that I now have their full support.

“Claressa is just a brief stop on my journey. I have bigger dreams and bigger shoes to fill in my life. I’m on my way to fulfilling my personal legend — being crowned the undisputed women’s junior middleweight champion. This is just another step on that journey. Given my faith, I feel that while what happened in October was incredibly unfortunate, this was God’s plan. And I have faith that my hand will be raised in victory in January.”

In the junior welterweight co-feature, Shohjahon Ergashev (17-0, 15 KOs), 27, an Uzbekistan native fighting out of Detroit, and Keith Hunter (11-0, 7 KOs), 27, of Las Vegas, will square off in a world title elimination fight. The winner would become mandatory for the secondary belt held by Mario Barrios (25-0, 16 KOs), who first faces a rematch with Batyr Akhmedov.

“My goal is to be the junior welterweight champion of the world in 2020,” Ergashev said. “After I win this fight, I will be just one step away from realizing my dream of bringing the world title home to my country Uzbekistan.”

While Ergashev has long been considered a top-tier prospect, Hunter, the younger brother of heavyweight contender and former U.S. Olympian Michael Hunter, is less known and will be making his television debut.

“I’m looking forward to making my national television debut on Showtime,” said Hunter, who is trained by former bantamweight world titlist Clarence “Bones” Adams and co-managed by former heavyweight world champion Hasim Rahman. “Boxing is in my blood and Jan. 10 will be my chance to take my career to the next level. Ergashev has a bounty on his head. I’m here to collect.”