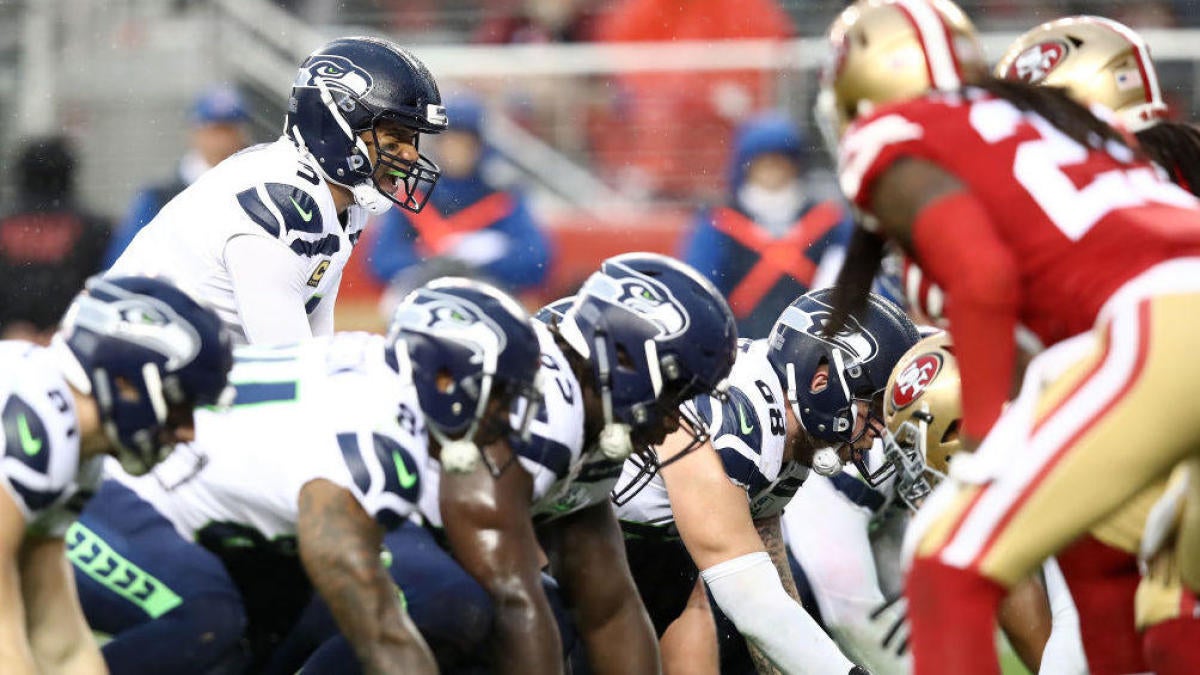 One of the NFL’s fiercest and best rivalries in recent history sure looks like it might be back. It wasn’t that long ago that the San Francisco 49ers and Seattle Seahawks were duking it out for NFC West supremacy on an annual basis. From 2010 through 2014, one of those two teams won the division each of those seasons. (Three for the Seahawks and two for the 49ers.) While Seattle has remained a contender, in the years since, the 49ers have been on a bit of a downswing. Until this year. In Week 10, “Monday Night Football” will kickoff at 8:15 p.m. ET on ESPN.

San Francisco enters this game with the best record in the NFL, sitting at 8-0. Seattle, meanwhile, is 7-2 and currently in control of one of the two Wild Card spots in the NFC playoff race. There’s an opportunity on Monday night for the Niners to create a bit of space, or for the Seahawks to turn this thing into a real battle.

The 49ers enter this game as 6.5-point home favorites over the Seahawks, per Sportsline. The over/under opened at 44.5 and has since moved all the way up to 47.5 points.

It’s clear that the strength of the 49ers’ team is their offense. But that doesn’t mean the offense doesn’t bring anything to the table. San Francisco has scored 24-plus points in six of eight games, and the Niners have one of the best running games in the NFL.

Everything for San Francisco is built off of that ground game, and the way it allows Kyle Shanahan to get into the play-action passing package. Tevin Coleman is coming off his worst game of the season — a practically inexplicable 12 carries for 23 yards against the Cardinals — but in the previous four games since returning from injury, Coleman had carried 65 times for 309 yards and five scores. Matt Breida has been balling all season, averaging 5.3 yards per carry on 99 totes and checking in ninth among 36 qualified running backs in Football Outsiders’ DVOA.

This dominant ground game should have plenty of opportunities to make hay on Monday night. The Seattle defense has not been all that successful stopping the run this season, allowing an average of 4.7 yards per carry and checking in 22nd in run defense DVOA. The Seahawks have also missed 69 tackles so far this season, 10th-most in the NFL. That’s not a good thing when you’re going against two shifty backs like Coleman and Breida. The Seahawks have been especially leaky against runs to the left side of the line of scrimmage, and San Francisco has averaged 5.3 yards per carry running off the left edge, per Football Outsiders.

The 49ers’ most recent game was last Thursday night against the Cardinals, and here’s what we wrote about Jimmy Garoppolo prior to that game:

Because the run game has been so good, Jimmy Garoppolo has not been asked to do a whole lot. His season high is 33 pass attempts, and he’s thrown less than 30 in five of San Francisco’s seven games. The average NFL team has thrown 34.6 passes per game this season, while the Niners are averaging just 27.1 per game.

And it’s a good thing for San Francisco that they haven’t needed to ask Jimmy G to do a whole lot, because he just hasn’t been very good. He has completed nearly 70 percent of his passes and is averaging nearly eight yards per attempt, but (a) he has benefited from having the third-highest expected completion percentage (68.2 percent) in the NFL, per NFL.com’s NextGen Stats, due to Shanahan’s schematic wizardry; (b) he has rarely been asked to throw into tight windows (12.2 percent of throws, fifth-lowest in the league); (c) he is almost never asked to challenge defenses down the field (his average throw has been 2.7 yards short of the sticks, third-lowest in the league behind only and Teddy Bridgewater; and (d) he’s got nine touchdowns against seven interceptions in seven games.

Naturally, Garoppolo played his best game of the season that night, completing 28 of 37 passes for 317 yards, four scores, and no picks. He has already formed a strong connection with Emmanuel Sanders, completing 11 of 14 passes for 137 yards and two scores to his new top target. The Niners move their receivers all over the field, so there will be plenty of opportunities for him to burn Shaquill Griffin, Tre Flowers, and Jamar Taylor, none of whom is playing all that well this season.

Seattle has been particularly vulnerable against passes to the left side of the field, where Flowers has been a turnstile all season. The Seahawks’ zone-heavy defense is designed to give up short passes before coming up and rallying to the ball, a dangerous proposition against a team like San Francisco that involves its running backs so heavily in the action. Working against the Niners is the likely absence of George Kittle, who is the most explosive passing-game weapon they have. His ability to make hay after the catch turns some of those short gains into long ones, and he can take the top off the defense down the seam as well. They don’t have a readymade replacement for Kittle, though the return of versatile fullback Kyle Juszczyk could help.

Even with all of those things working against them on the defensive side of the ball, the Seahawks still have a really good chance to win this game, because Russell Wilson exists and he is on their team. An inner-circle MVP candidate, Wilson is playing absolutely out of his mind right now. The numbers do not even sound real: 200 of 293 (68.3 percent) for 2,505 yards (8.5 per attempt), 22 touchdowns and one freaking interception. That’s a 118.2 passer rating, by the way.

Wilson’s top targets are Tyler Lockett in the slot and DK Metcalf on the outside. Lockett, like Wilson, is playing out of his mind. He’s got 59 catches on 72 targets, gaining 767 yards and finding the end zone six times. He is an elite deep-ball receiver and an elite after-catch receiver. Despite being undersized, he seems to win every contested-catch situation by using his upper body to create late leverage and separation at the catch point. He’s unreal.

Metcalf, meanwhile, began the season as a rotational player who essentially ran one route: a deep go down the left sideline. That’s basically all he did in college, but he was tall and fast and athletic enough to make it work. Over the last several weeks he has rounded into a more complete player, and like Lockett, he has become a very good contested-catch receiver. Metcalf has 29 grabs for 525 yards and five touchdowns, and those figures seem to under-sell his recent impact.

The Seahawks lost tight end Will Dissly a few weeks back, but Jacob Hollister looked pretty Dissly-esque in nabbing two touchdown grabs last week. That’s unlikely to be an every-week type of thing, though, and that’s likely why the Seahawks were willing to spend a waiver claim on Josh Gordon, who should gradually overtake Jaron Brown and David Moore in the team’s No. 3 receiver role over the next few weeks. We’ll have to wait and see how he and Wilson mesh, but on the surface, it sure seems like a good fit.

The San Francisco pass defense has been the best in the NFL this season by DVOA. The combination of their pass rush and pass coverage is matched by only that of the Patriots. From our preview last week:

The Niners have an 11.4 percent sack rate, best in the league. Among the 167 players who have rushed the passer on at least 100 defensive snaps, Bosa ranks first in the NFL in Pro Football Focus’ Pass Rushing Productivity. Ford ranks eighth. Buckner ranks 26th and Armstead ranks 54th. Quarterbacks are nearly helpless against this team’s pressure, and it’s forced them into extremely poor performances. San Francisco has allowed the league’s second-lowest completion percentage, yards per attempt, passer rating, and QBR this season.

If the Cardinals can maintain that type of right, it will help neutralize the San Francisco pass rush. But the issue is that their coverage on the back end has been nearly as good as what they’ve been doing up front. There are 115 corners and safeties who have been on the field for 100-plus passing snaps, per PFF. San Francisco has seven players on that list, and they check in seventh (Emmanuel Moseley), ninth (Richard Sherman), 11th (Tarvarius Moore), 22nd (Jimmie Ward), 26th (K’Waun Williams), 28th (Ahkello Witherspoon), and 51st (Jaquiski Tartt) in passer rating allowed. Tartt, the lowest place on that list, has allowed just a 77.5 passer rating.

The 49ers should almost surely be able to get pressure on Wilson. They get pressure on everyone, and even with their improved play this season the Seahawks give up pressure fairly often as well. But Wilson is a magician and makes pressure irrelevant. He makes no sense.

Like the Seahawks, the 49ers play sides with the cornerbacks, which means Seattle can align Lockett and/or Metcalf to avoid Sherman if they want to. It’ll be fascinating to see how the Seahawks elect to deal with their former star. You can bet your life that Sherman wants to pick off one of Russell Wilson’s passes, but given that he aligns at left corner (offense’s right side) he is unlikely to end up covering Metcalf all that often, and given that he almost never bumps down into the slot, he’s unlikely to see Lockett that often either. The Seattle offense just does not test Sherman’s area of the field all that often.

Somewhat surprisingly, the 49ers have shown some vulnerability in the run game in recent weeks as well. Christian McCaffrey gained 117 yards on 14 carries two weeks ago, while Kenyan Drake gained 110 yards on 15 carries last Thursday night. Chris Carson is coming off a 16-carry, 105-yard game against what had previously been the league’s No. 1 run defense by DVOA, and it would not be all that surprising if the Seahawks, who love to establish the run at all costs, came out with a game plan that involved a heavy dose of Carson. With Niners linebacker Kwon Alexander out, the Seahawks could see even more success on the ground than San Francisco’s last two opponents.