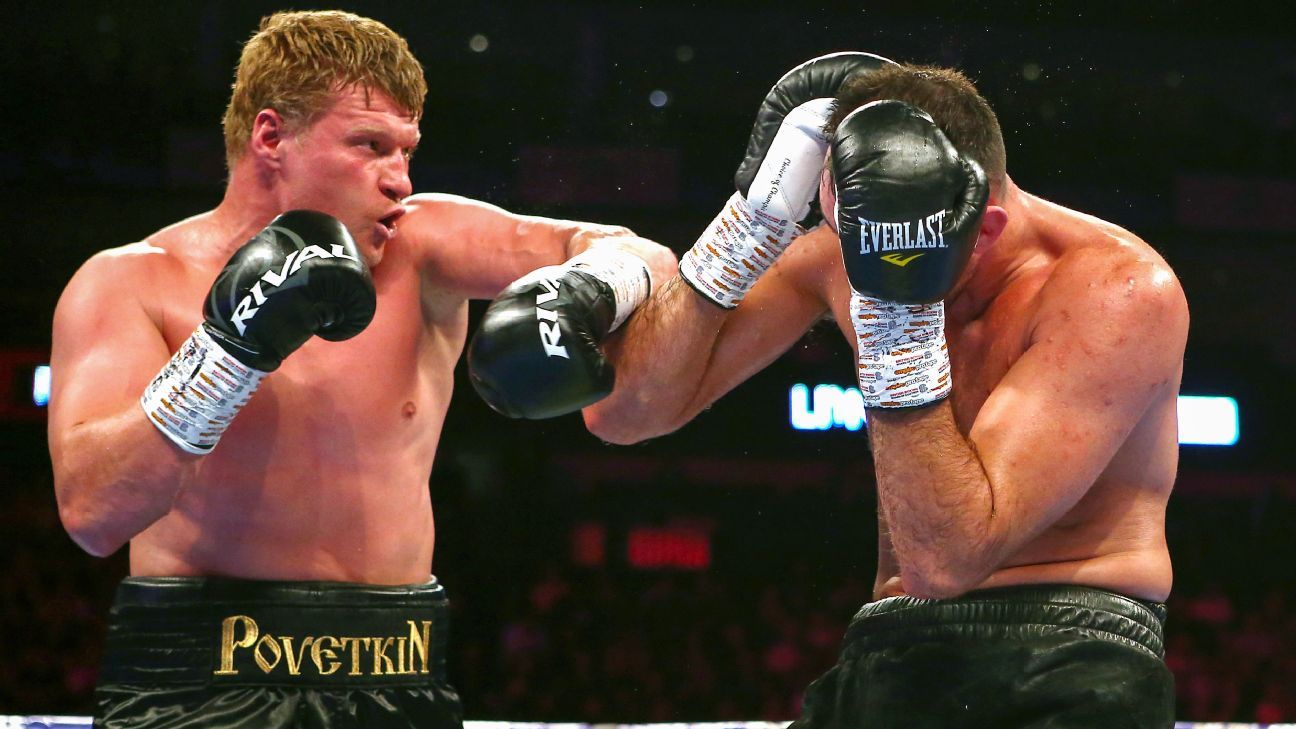 Heavyweights Alexander Povetkin has fought for a heavyweight world title and Michael Hunter would like to. The former Olympians will square off in an elimination bout with the winner putting himself in position to get that eventual opportunity.

Povetkin (35-2, 24 KOs), a 2004 Russian Olympic gold medalist, once held a secondary heavyweight title and suffered both of his losses in world title bouts, a one-sided decision to Wladimir Klitschko in 2013 and a seventh-round knockout by Joshua in September 2018.

Povetkin, who has twice failed drug tests for banned substances, rebounded from the loss to Joshua for a convincing decision win over Hughie Fury — the first cousin of lineal heavyweight champion Tyson Fury — on Aug. 31.

“Before the fight with Hughie Fury, I hadn’t entered the ring for almost a year, recovering from an elbow surgery, so I’m very glad that I can have another fight this year,” Povetkin said. “Hunter is a strong, highly ranked boxer. I think it will be a good and interesting fight. I’m not going to make any plans for the next year. First I have to go through this fight against Hunter, but I would definitely like to box for the world title.”

Hunter (18-1, 12 KOs), 31, of Las Vegas, who was a 2012 U.S. Olympian, suffered his only loss challenging Oleksandr Usyk for a cruiserweight world title in 2017. After that loss, Hunter moved up to heavyweight and has won six fights in a row, including a decision over then-unbeaten Sergey Kuzmin on Sept. 13 in New York.

“This is a very exciting opportunity for me, and I have got to prove myself once again,” Hunter said. “Whether you’re the underdog or the favorite it’s all the same because I feel like I am the best fighter out there.

“I look at this fight with Povetkin as my ‘gold medal’ fight. I was in the Olympics and so was he. He won the gold medal and I didn’t, so this is basically my gold medal fight right here. I am always pushing for the KO. I thrive on making guys quit, so I’m definitely going to push for it. I am a boxer first though, and I’m certainly going to be boxing his shoes off. If I see any quit in him, then I am going to take advantage of that.”

“It is a big step up for me in terms of the level of opponent and the size of the event,” Hrgovic said. “The whole world will be watching so this is a big opportunity for me to showcase my skills.”

Molina, 37, of Raymondville, Texas, has fought for a heavyweight world title twice in knockout losses to Deontay Wilder in 2015 and Joshua in 2016.

“I’m expecting a hard fight,” Hrgovic said. “He rocked Deontay Wilder in their fight and almost knocked him down. He is a very dangerous fighter with a lot of experience. This will be a big step up in competition and I am expecting the hardest fight of my career.”

Molina didn’t fight at all in 2018 while serving a suspension for a positive test for a banned substance related to the fight with Joshua, but he is coming off a six-round decision win over Nick Guivas in February and excited to be back in a meaningful fight.

“I am beyond excited to be a part of this amazing boxing event in Saudi Arabia,” Molina said. “I am grateful to finally be back in the ring and I know exactly what this fight means. Eddie Hearn has given me more than enough time to be physically, mentally and spiritually ready for Hrgovic.”