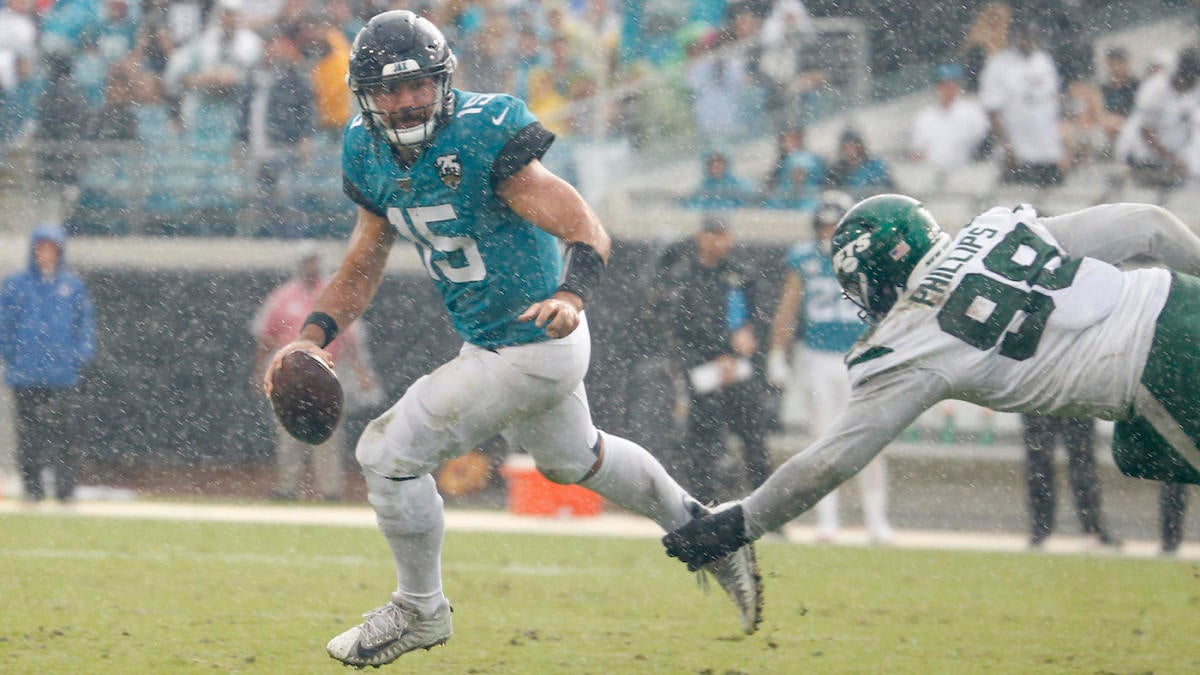 Over the past five years, as the Jaguars have searched for a franchise quarterback, they have:

Their process of identifying their franchise quarterback might’ve been flawed. It might’ve been problematic. It might’ve been exhaustive. It might’ve taken forever. But finally, the Jaguars have found their quarterback of today and tomorrow. His name is Gardner Minshew, he played college ball at East Carolina and Washington State, and he wasn’t drafted in the first round or given a lucrative deal in free agency. He’s the aforementioned 178th-overall pick of this year’s draft, he wasn’t supposed to be playing meaningful football this year, if ever, and as a rookie, he’s already established himself as the Jaguars’ franchise quarterback.

Since Nick Foles — he who signed that aforementioned four-year, $88 million deal this offseason — went down with a fractured collarbone midway through the season opener, Minshew has:

None of those numbers will necessarily blow anyone away, but it’s important to remember that he was a sixth-round pick six months ago. He’s still developing and adjusting to the NFL just like every other rookie. Look at how much the sixth-overall pick, Daniel Jones, and the 15th-overall pick, Dwayne Haskins, are struggling. The point being, there’s a very good chance that this version of Minshew isn’t the final version. Updates should be coming.

He wasn’t supposed to play. But not only is he playing, he’s playing like the best rookie quarterback in football — even better than the top-overall pick, Kyler Murray. I’m not saying that if we redid this year’s draft that Minshew would be the first-overall pick or even the first quarterback selected, but there’s a very reasonable argument to be made that he’d be the second quarterback taken behind only Murray.

After starting the season with five stellar outings that prompted a mania, Minshew finally met resistance in Weeks 6 and 7, when he completed under 48 percent of his passes, averaged only 6.9 yards per attempt, threw one touchdown and one interception, and generated a passer rating of 68.9. It was enough to wonder if maybe those first five games were a bit of a mirage, if this was the new normal, and if Foles should get his starting job back when he’s healthy.

And then Sunday happened and the whole debate became a moo point. Minshew is the Jaguars’ best option in both the short and long term. In a win over the Jets that kept the 4-4 Jaguars very much alive in the AFC South, Minshew completed 64.7 percent of his passes for 279 yards, three touchdowns, no interceptions, and a 119.6 passer rating. It wasn’t just about the numbers he deposited. It was also about the way in which he went about depositing them.

It wasn’t all simple checkdowns and screens and wide-open passes (though there was a ton of that). Minshew also created openings himself.

Those are, dare I say, Mahomes- and Rodgers-esque type of plays. That doesn’t mean Minshew is on their level yet. He still has some noticeable flaws (substandard arm strength). He’s already fumbled nine times. It just means he deserves praise for all that he’s done so far. And he deserves to keep his job even when Foles is healthy.

Obviously, it’s Minshew himself who deserves the credit for his surprising emergence and ascent. But let’s also take a moment to commend the Jaguars — yes, the same team that drafted Blake Bortles and stuck with him one season too long, and passed on Patrick Mahomes and Deshaun Watson in order to take Leonard Fournette — for finding Minshew. Did the Jaguars know Minshew would be this good? Of course not. If they had known, they wouldn’t have wasted all that money on Foles in free agency and they wouldn’t have waited until the 178th pick to draft him.

What the Jaguars deserve credit for is being willing to take multiple shots in the dark. Minshew was the third quarterback the Jaguars have drafted in the sixth round since 2016. The first two, Brandon Allen (who will start his first NFL game for the Broncos on Sunday) and Tanner Lee, obviously didn’t amount to anything. But they also didn’t cost the Jaguars much. The Jaguars, to their credit, understood that the potential rewards outweighed the costs by a significant margin. So, they kept firing shots in the dark until they actually hit something. Again, along the way, they made mistakes. The Foles contract never made sense. They took Fournette, a running back, over two generational quarterbacks. But for finding Minshew, the Jaguars deserve credit. They might not have known what he would become. Nobody — well, except Mike Leach maybe — could’ve known. But they took him because they understood there existed a slim chance he could become something and knew that the slim chance was worth taking.

Now, they need to avoid making a mistake that would render all of this pointless. They need to make sure he keeps the starting job over Foles.

On that note, welcome to the Week 9 edition of quarterback power rankings. Before we begin, a reminder of the rules: