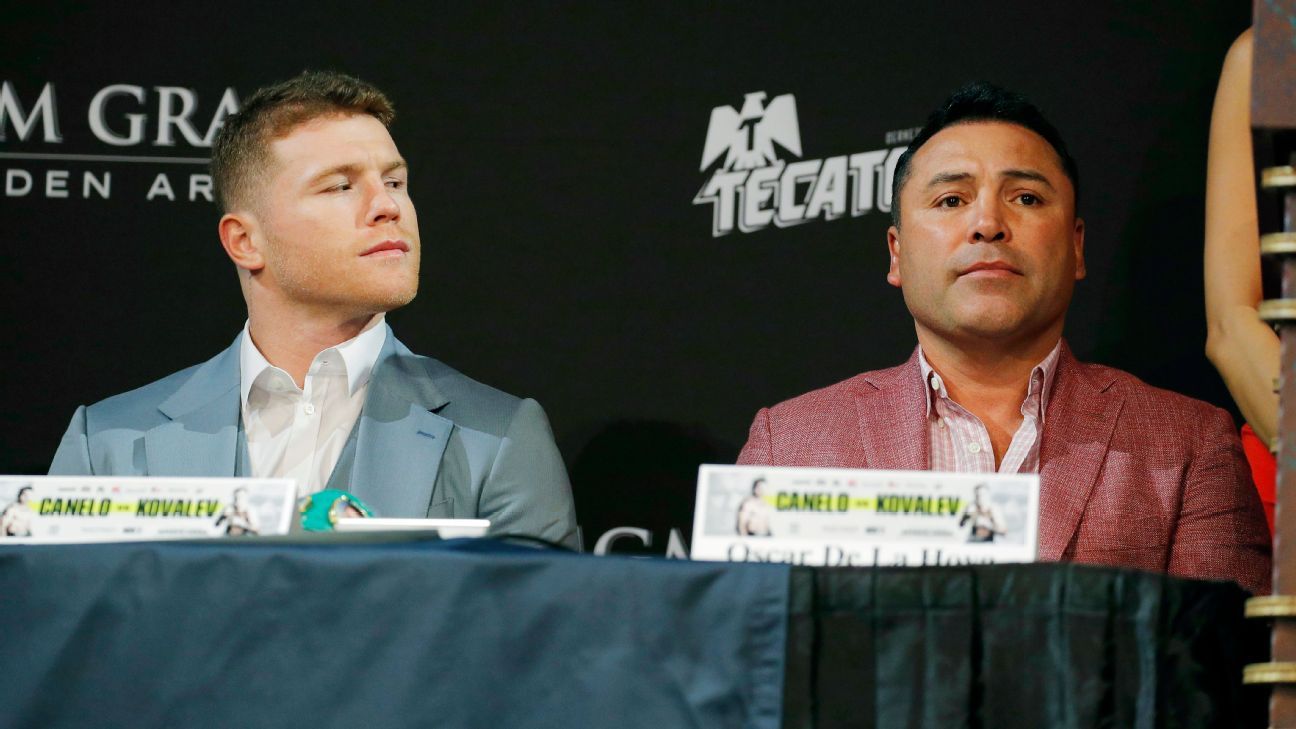 LAS VEGAS — As the fighters and their teams settled into their seats on the stage at the KA Theater at the MGM Grand for the final prefight news conference Wednesday afternoon ahead of the fight between Canelo Alvarez, boxing’s biggest star, and light heavyweight world titlist Sergey Kovalev, there seemed to be more tension between Alvarez and his promoter, Golden Boy CEO Oscar De La Hoya, than between Alvarez and his opponent.

Alvarez and De La Hoya, who have worked with each other since 2010 and through many megafights, sat side by side, but they might as well have been a million miles apart.

There was zero interaction between them. Not a handshake, not a pat on the back, not a smile or a word to each other — when normally there would be. The men barely, if ever, so much as looked at each other.

It’s no secret Alvarez has been unhappy with the company for months, and with De La Hoya in particular. He blames Golden Boy for fumbling negotiations with mandatory challenger Sergiy Derevyanchenko that led to Alvarez being stripped of one of his middleweight belts Aug. 1. He clashed with company officials over the prospect of a third bout with rival Gennadiy Golovkin, a fight the company wanted to make to honor its deal with DAZN, the broadcaster that has a long-term deal with Golden Boy and Alvarez.

Alvarez, the reigning middleweight world champion, had other fights in mind, however, namely his reach for history on Saturday (DAZN, 9 p.m.), when he will move up two weight divisions to challenge Kovalev for his light heavyweight belt in an effort to win a world title in a fourth weight division and become only the second Mexican fighter to win a title at 175 pounds.

Before the formal news conference, Alvarez sat down with several reporters and briefly addressed the issues with De La Hoya and Golden Boy when asked. He made it clear the days of a close, personal relationship were over.

Alvarez has made it very clear it’s business only with Golden Boy, to whom he is contractually tied for the rest of a five-year, 11-fight, $365 million deal with DAZN.

For years, Alvarez, who understands English but prefers to speak to the media in Spanish, has always relied on Golden Boy’s bilingual public-relations team, matchmaker Robert Diaz, president Eric Gomez or CEO De La Hoya to help him. But with the relationship with company officials so rocky, for this fight he has brought in his own interpreter in Vivien Nichols.

De La Hoya was not present for Alvarez’s pre-news conference meeting with the media as he usually would be, and he left immediately following the formal news conference while Alvarez lingered, did more interviews and showed off his 2-year-old daughter, who was wearing a “Canelo vs. Kovalev” bandana. Alvarez (52-1-2, 35 KOs), 29, much preferred to focus on the fight rather than continue discussing issues with his promoter.

He said rather than fight GGG for a third time, he wanted Kovalev “because he’s the best in his division, he’s one of the best. That’s why we chose him, to make history by fighting one of the best.”

If Alvarez wins Saturday night, he will become only the fourth fighter in boxing history to have won a world title at junior middleweight and light heavyweight. He would join International Boxing Hall of Famers Sugar Ray Leonard, Thomas Hearns and Mike McCallum.

Kovalev (34-3-1, 29 KOs), 36, a Russia native fighting out of Los Angeles, has known Alvarez for years, and there is no particular ill will between them, which showed when they posed for photos smiling together after the news conference. But that doesn’t mean Kovalev, who will be making the second defense of his third title reign, isn’t hungry for what would be the highest-profile win in a career filled with significant ones.

“My goal is to break his strategy and use my strategy in the fight,” Kovalev said. “My goal is to defend this title and follow my dreams. This is a big test for me — to prove one more time, I’m the best light heavyweight in the division.

“We’re two great champions, and right now, we respect each other inside and outside the ring. But we will do our job very well for the boxing fans. And we will be fighting, never step back, never give up, we will make a great fight 100 percent.”