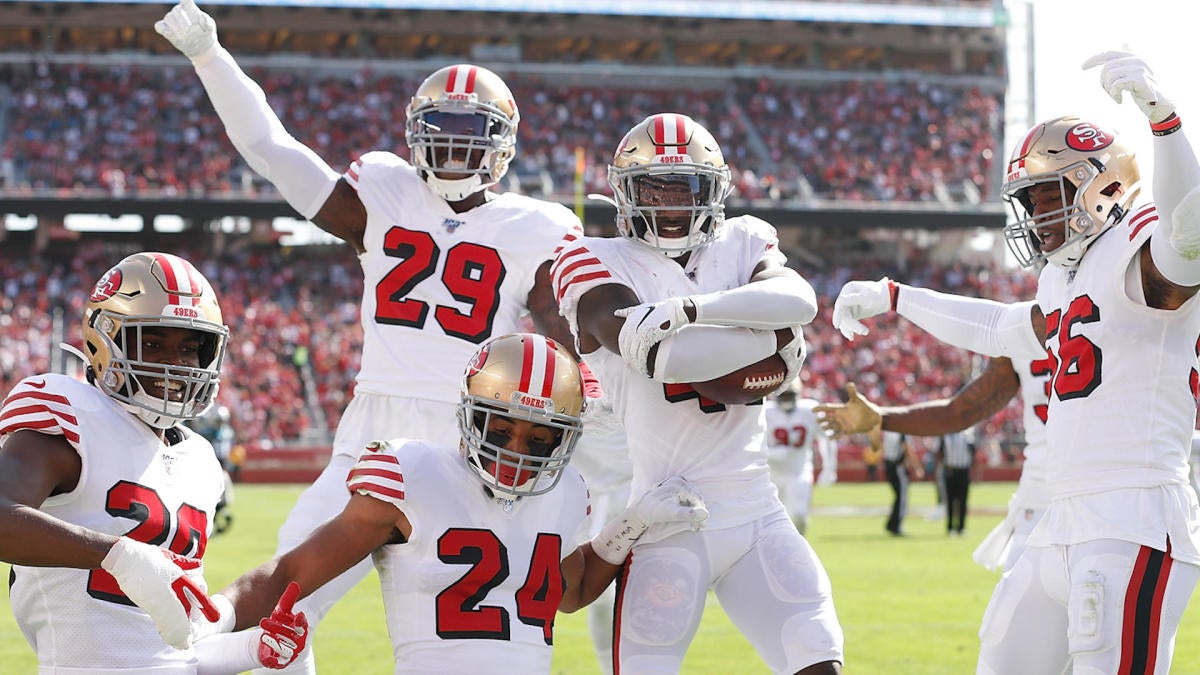 Eight weeks into the 2019 season, the NFC West looks a whole lot like the best division in football. The four teams in the division are collectively 21-9-1 at this moment, giving the NFC West a lead of 1.5 games better than the next-closest division. The 6-2 Seattle Seahawks are in second place. The 5-3 Los Angeles Rams are in third.

Of course, the San Francisco 49ers, with their undefeated 7-0 record, sit in first place. The Niners will put that undefeated record on the line on Thursday night, when they take on the surprisingly frisky Arizona Cardinals, who sit in fourth place with their 3-4-1 mark.

Let’s break down how these two teams match up.

Dubin joined Will Brinson on the Pick Six Podcast to dive deeper into the matchup between these teams. Give it a listen below and be sure to subscribe:

When the Cardinals have the ball

It seems appropriate to begin this section by talking not about the Cardinals offense, but the 49ers defense, which is the toughest test Arizona will have faced this season. The 49ers would be widely considered the best defense in the NFL if the Patriots did not exist.

San Francisco ranks first in the league in yards allowed per game, second in points allowed per game, and second in defensive efficiency, per Football Outsiders’ DVOA. New England’s defense is the best in the history of DVOA’s database, which stretches back to 1986. San Francisco’s ranks third. (The 1991 Eagles are second.) The front of this defense is terrifying, which Nick Bosa, Dee Ford, Arik Armstead, DeForest Buckner, Solomon Thomas, D.J. Jones, and Ronald Blair all factoring heavily into both the pass rush and run defense.

The Niners have an 11.4 percent sack rate, best in the league. Among the 167 players who have rushed the passer on at least 100 defensive snaps, Bosa ranks first in the NFL in Pro Football Focus’ Pass Rushing Productivity. Ford ranks eighth. Buckner ranks 26th and Armstead ranks 54th. Quarterbacks are nearly helpless against this team’s pressure, and it’s forced them into extremely poor performances. San Francisco has allowed the league’s second-lowest completion percentage, yards per attempt, passer rating, and QBR this season.

The Cardinals have been surprisingly stingy when it comes to allowing pressure, ranking third in pressure rate allowed at PFF. (Only Derek Carr and Jimmy Garoppolo have been pressured less often as a percentage of drop backs.) Much of that is due to the quick-strike nature of Kliff Kingsbury’s offense. Kyler Murray has taken 2.48 seconds to throw on his average drop back, ninth-fastest among 33 quarterbacks who have thrown at least 100 passes. He’s one of 10 quarterbacks who have thrown more than half his passes within 2.5 seconds of the snap.

If the Cardinals can maintain that type of right, it will help neutralize the San Francisco pass rush. But the issue is that their coverage on the back end has been nearly as good as what they’ve been doing up front. There are 115 corners and safeties who have been on the field for 100-plus passing snaps, per PFF. San Francisco has seven players on that list, and they check in seventh (Emmanuel Moseley), ninth (Richard Sherman), 11th (Tarvarius Moore), 22nd (Jimmie Ward), 26th (K’Waun Williams), 28th (Ahkello Witherspoon), and 51st (Jaquiski Tartt) in passer rating allowed. Tartt, the lowest place on that list, has allowed just a 77.5 passer rating.

One thing that might work in Arizona’s direction is that most of the passes in this offenses are directed to players in the slot or out of the backfield. They use four wideouts on almost every snap, with two of them working out of the slot. Most teams only have one corner with extensive slot usage, and the Niners are no different. That typically puts either Christian Kirk or Larry Fitzgerald at an advantage against a No. 3 or No. 4 corner on the inside.

Murray may target the slot even more heavily on Thursday, because Arizona’s top two running backs are out for this game. David Johnson is expected to essentially miss his third consecutive game due to injury (he did play briefly in one), while Chase Edmonds is rumored to be out for multiple weeks. In their place will be Kenyan Drake, who was acquired from the Dolphins earlier this week. Drake is a versatile back who should be able to help in the passing game, but having arrived just a few days ago, likely does not have a handle on the full play book and will need things scaled back for him on at least some level.

The Cardinals have done an excellent job creating running lanes due to the way they spread the field. (Memo to NFL coaches: It is far easier to run up the middle when you don’t bring a ton of defenders into the box by going into a jumbo set.) They’re collectively averaging 4.8 yards per carry, and they rank fourth in Football Outsiders’ rush offense DVOA. Much of the running has been done by Johnson and Edmonds, but Murray’s ability to work on both designed runs and scrambles — and the threat that poses to defenses — has contributed heavily to those numbers as well. Drake should be put in position to succeed more often than he was in Miami, but is likely to find tough sledding against the excellent San Francisco front.

Speaking of strong running games, the 49ers! The way Kyle Shanahan is scheming things up for Tevin Coleman, Matt Breida, Raheem Mostert, and Jeff Wilson is pretty ridiculous. San Francisco is averaging 4.7 yards per rush, 181.1 yards per game, and has an NFL-high 13 rushing scores. The team ranks eighth in rush offense DVOA and the offensive line is fifth in Adjusted Line Yards per carry at Football Outsiders.

The Niners have by far the highest run rate in the NFL, turning to the ground on 58 percent of their plays, according to Sharp Football Stats. It’s not all that much different in neutral score situations (meaning the score is within 14 points in either direction), as San Francisco has called a run 54 percent of the time, making them one of only four teams to run more often than they pass. (The others are the Vikings, Seahawks, and Ravens.)

Teams have generally been able to get whatever they want against the Cardinals in the run game. Arizona has allowed 4.7 yards per carry and ranks 27th in rush defense DVOA and 22nd in Adjusted Line Yards allowed per carry. There was some thought that the 49ers’ rush offense would sorely miss fullback Kyle Juszczyk, but it doesn’t appear to have worked out that way over the past few weeks.

The offensive line gets excellent push up front, Shanahan gets the backs into open space, and each and every one of the backs takes advantage of not just what is given to them by the blocking and the scheme, but makes even more happen with the ball in their hands. It’s a versatile, dynamic run game that makes the 49ers the rare offense where it actually makes sense for them to turn to the run when most teams should be passing.

Because the run game has been so good, Jimmy Garoppolo has not been asked to do a whole lot. His season high is 33 pass attempts, and he’s thrown less than 30 in five of San Francisco’s seven games. The average NFL team has thrown 34.6 passes per game this season, while the Niners are averaging just 27.1 per game.

And it’s a good thing for San Francisco that they haven’t needed to ask Jimmy G to do a whole lot, because he just hasn’t been very good. He has completed nearly 70 percent of his passes and is averaging nearly eight yards per attempt, but (a) he has benefited from having the third-highest expected completion percentage (68.2 percent) in the NFL, per NFL.com’s NextGen Stats, due to Shanahan’s schematic wizardry; (b) he has rarely been asked to throw into tight windows (12.2 percent of throws, fifth-lowest in the league); (c) he is almost never asked to challenge defenses down the field (his average throw has been 2.7 yards short of the sticks, third-lowest in the league behind only Luke Falk and Teddy Bridgewater); and (d) he’s got nine touchdowns against seven interceptions in seven games.

Some of the poor performance can be attributed to a relative paucity of weapons at receiver, but he’s got George Kittle at tight end, several dynamic options out of the backfield, and it’s not like Marquise Goodwin (speed), Deebo Samuel (speed and after catch ability), and Dante Pettis (route running) don’t bring things to the table themselves.

All that said, Garoppolo should be set up for possibly his best game on Thursday night. The Arizona pass defense is one of the friendliest in the league, and specifically they have struggled to stop any tight ends. Kittle should be in line for a huge performance, assuming San Francisco elects to throw the ball on occasion. The best players on the Cardinals defense is Patrick Peterson, and there’s really nobody on the San Francisco offense that he should be assigned to shut down. Emmanuel Sanders is the best option, but he’s only been there a week and a half and is likely to still be in a rotation rather than working as a full-time player.