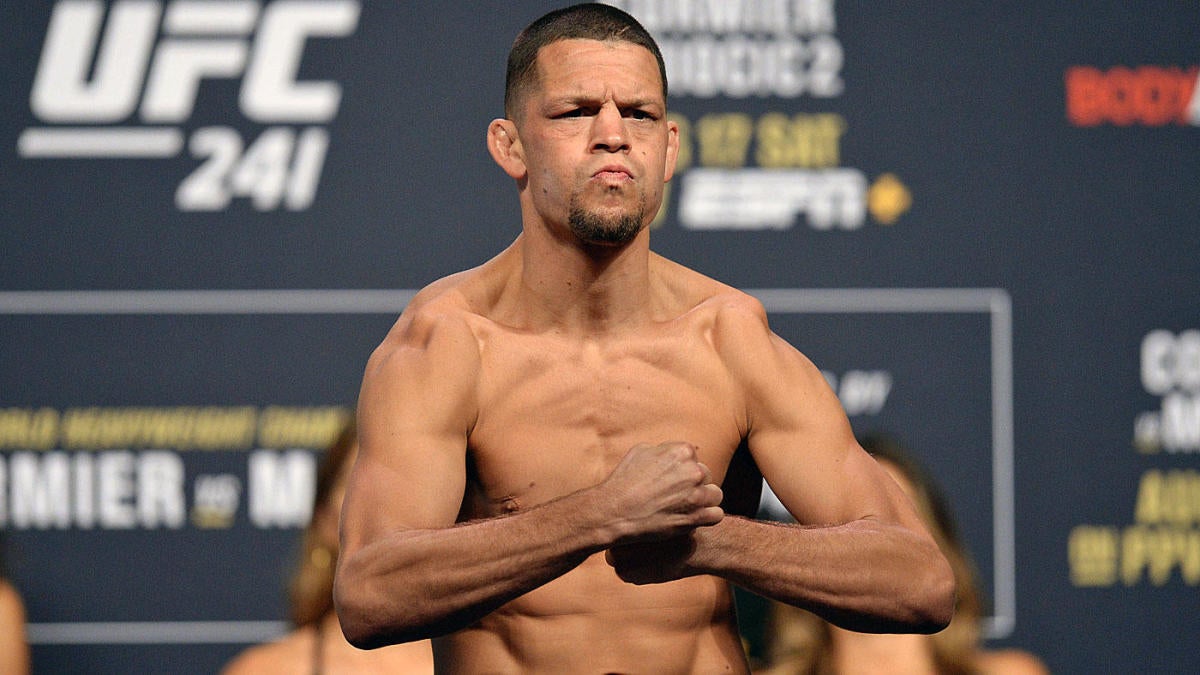 Nate Diaz sent shockwaves across the MMA landscape on Thursday and placed the status of a must-see UFC 244 main event on Nov. 2 very much in jeopardy after revealing an adverse drug-test finding in a cryptic social media post.

Despite Diaz (20-11) publicly removing himself from a welterweight bout against Jorge Masvidal (34-13) that was set to crown the ceremonial Baddest Motherf—-er (BMF) champion, sources told ESPN that Diaz has not been provisionally suspended and that the fight is not officially off. The ultimate decision comes down to Diaz himself after reportedly testing positive for trace amounts of a prohibited selective androgen receptor modulator (SARM), according to ESPN.

The 34-year-old Diaz denied knowingly taking any banned substances and said it “might be from some tainted supplements.” Although both UFC and USADA have yet to publicly comment, Masvidal tweeted out support to his foe and fellow beloved anti-hero.

Until a resolution can be found for the pay-per-view headliner from New York’s Madison Square Garden, let’s take a deeper look at three things to know about the situation.

1. Diaz is placing pride ahead of monetary gain. The major reveal from Diaz’s online rant was his claim that he was told to keep quiet and hide the drug test results until after the fight. A 2018 amendment to the UFC’s anti-doping policy with USADA stated the promotion will no longer announce a potential violation before the fighter being accused has an opportunity to have their case investigated and resolved.

Diaz’s decision to go public was likely made as an attempt to clear his own name ahead of time without the potential for any narrative spin and was one almost certainly rooted in distrust for the entire process. Let’s not forget, Diaz’s older brother Nick was initially given a five-year suspension (considered by many to be a so-called “lifetime” ban considering his age) from the Nevada State Athletic Commission for a third positive marijuana test that was eventually reduced to 18 months.

“I don’t give a f— about some money over my dignity and my legacy,” Diaz wrote. “I’m not playing along with this bulls—. I’m not staying quiet and figuring it out after the fight. That’s cheating.”

Seeing Diaz stand up so sternly for his own principles should come as no surprise considering he sat out for three years at the peak of his physical and financial prime due to issues negotiating with the UFC.

2. There is no clear fallback plan in place to save the main event. During the three years since UFC made an annual pilgrimage to MSG, the company has created an expectation for a massive show in part because of how long it took for the sport to get legalized in the state of New York. Potentially losing Diaz-Masvidal would be a massive blow to UFC 244, which is also competing directly with a PPV-level boxing match featuring the sport’s biggest global star in Canelo Alvarez.

One would have thought welterweight Leon Edwards was tabbed from the beginning to be a potential replacement considering his history with Masvidal following their backstage brawl in March at UFC Fight Night in London. That never became a thing, however, which Edwards publicly confirmed Thursday in a tweet that said his offer was rebutted.

While UFC 244 is a decent card on paper, it doesn’t have the depth or star power on it to rival recent years or leave the promotion with much of a safety valve in terms of a replacement.

The Kelvin Gastelum-Darren Till middleweight bout is a nice co-main event bout but by no means could carry the card. And despite some the bravado shown by Conor McGregor on Twitter following Diaz’s announcement, the brash Irish star is on a European tour selling his whiskey brand and is targeting a January return.

3. What in the heck does this whole situation say about USADA? Nothing good, I’ll tell you that. Confidence has certainly waned from critics, media members and even fighters for the UFC’s anti-doping partner over the past calendar year. This should only elevate those concerns.

Between the high number of cases in which fighters had their names cleared years after initially being suspended for violations caused by tainted substances and USADA’s inability to find a scientific reason to support their confidence in Jon Jones’ constant pulsing for picograms of steroid traces, all is not well in the court of public opinion.

It’s hard not to create the impression that USADA Is making things up as it goes along, especially after some of the head-scratching decisions that include giving treatment to certain fighters (including Jones at UFC 232 when the card was moved to a different state to accommodate his adverse drug test findings) that lesser names weren’t afforded.

If Diaz did pop for a banned substance, everyone from the public to Masvidal and the UFC should be notified. And if this failed test is more faulty supplement than a blatant attempt at cheating, USADA needs to figure out a way to prove that in a consistent fashion without releasing any hints of impropriety, special treatment or business being placed in front of justice.