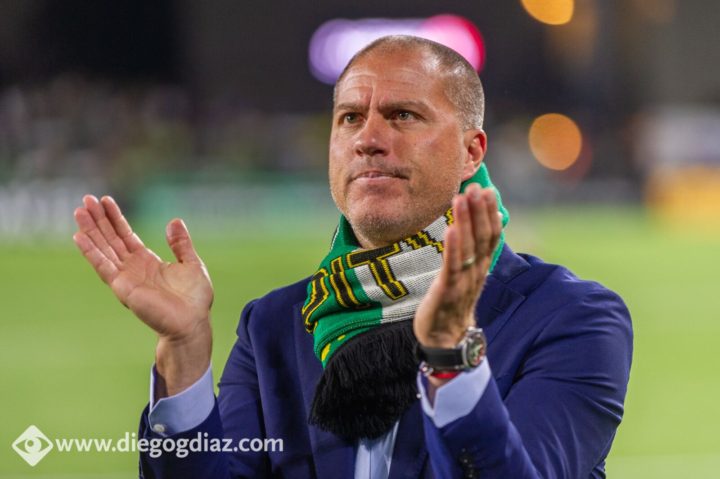 The Claret and Cobalt, this time came ready to play and using to their condition of local to their advantage, to deliver a valuable win over a slightly favorite Portland Timbers side.

Contrary to the Rose City squad not putting in display a top-notch game in the first half that thanks to their man of the match, goalkeeper Steve Clark, prevented what could become a total catastrophe.

In the 14’ minute a brilliant play that RSL could capitalize and beating the Timbers defenders, Steve Clark chested the ball and after clear it, landing on Aaron Herrera’s feet.

With no hesitations, the RSL defender sent a long-range shot of 40 yards that Steve Clark with a saving hand the man prevented in what could be the best goal of the postseason.

Still the Portland Timbers goalkeeper display of technique and mastery under the arches, he prevented in the end hat could be a rout but in the 28’ minute the man cannot do it alone.

As a combination of Corey Baird to a wide-open inside the area, Damir Kreilach with a header was witnessed by the likes of Timbers defenders Larry’s Mabiala, Bill Tuiloma, and Jorge Villafaña as simple spectators.

Defense wins games in the first half the Portland Timbers backfield put on a sloppy game.

As a result of that performance manager Giovanni Savarese, in halftime, he gave his Boys an earful that paid off with Dairon Aspirilla honoring his Mr. October moniker by scoring the tying goal in the 47′.

A number of opportunities came for the Portland side and with near goal plays, in the end, the mastery of Nick Rimando, became the difference-maker for RSL.

I still give Portland Timbers midfielder Sebastian Blanco an A for effort, with a couple of would-be near goals in the 65’ with a spectacular shoot and later with a bicycle kick in the 71’.

Consequently, these near shoots would make a difference for the Portland Timbers having the upper edge in the series against RSL but the manager with the best moves, became RSL Freddy Juarez.

‘The way this match was won was by a play by Joao Plata sending a cross pass to the right to a wide-open Albert Rusnak, in what looked like a well-rehearsed play and with their gamble paying off.

When Albert Rusnak fooling the Portland defense and leaving the stage open for Jefferson Savarino to score the game-winner in the 87’ minute for Real Salt Lake.

Diego Valeri is still an important asset to the Timbers game, his late substitution almost delivered

A mistake will be for the Portland Timbers if they let their Talisman Diego Valeri go!

Sebastian Blanco almost deliver another spectacular goal, but the man cannot do it alone

Defense wins games, tonight the Timbers backfield was missing in action, especially in the first half

In the end, thanks for another amazing season Portland Timbers

Player of the Match