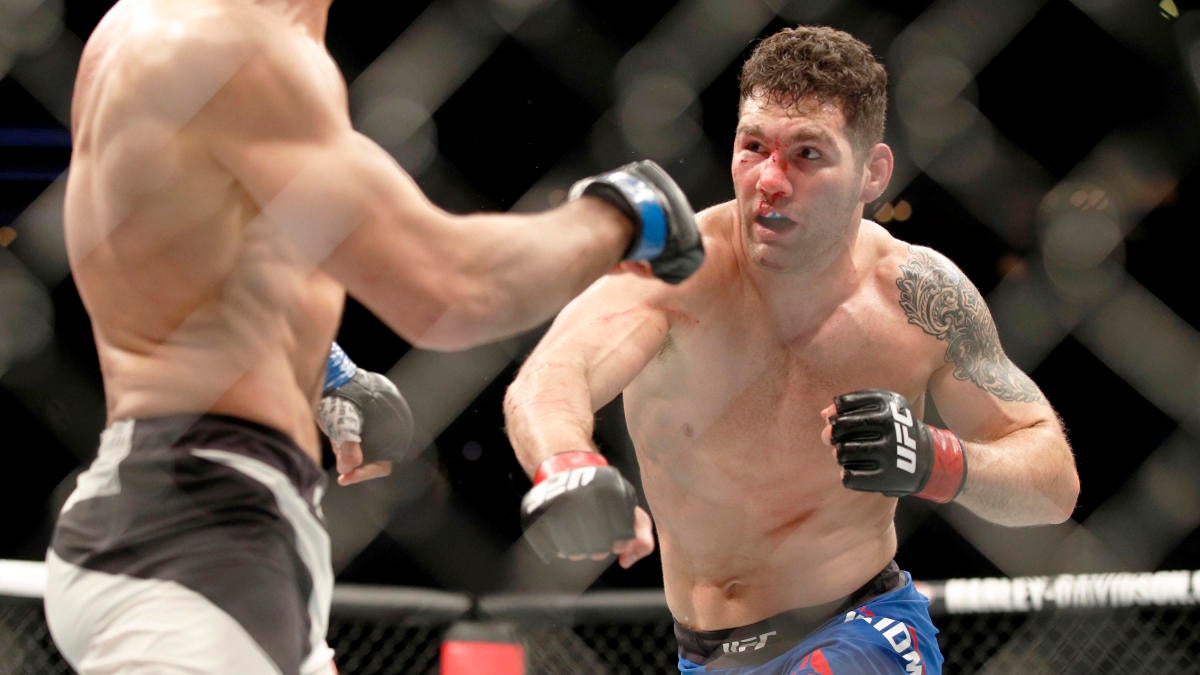 Dominick Reyes has seen his last two bouts determined by decision, and the outcome of his last fight was a topic of debate. The fourth-ranked light heavyweight has vowed to leave the judges out of the picture on Friday night when he takes on former middleweight champ Chris Weidman in the main event of UFC on ESPN 6 in Boston. The 12-bout UFC stop from TD Garden features the main UFC on ESPN 6 card starting at 9 p.m. The undefeated Reyes (11-0) notched a split decision over Volkan Oezdemir in March, though many observers believed his opponent deserved the nod. Reyes said he’s determined to stop Weidman (14-4), who has been knocked out in all four of his losses, but Weidman is determined to get back on track with a win over Reyes in his light heavyweight debut.

Reyes is a -155 favorite (risk $155 to win $100), while Weidman is the underdog at +135 (risk $100 to win $135) in the latest Reyes vs. Weidman odds. In the co-main event of UFC Boston, Jeremy Stephens takes on Yair Rodriguez in a rematch of their no contest from September. The latest UFC on ESPN 6 odds list that fight as a coin flip. Before making your UFC on ESPN 6 picks, make sure you listen to what SportsLine’s resident MMA expert, Kyle Marley, has to say.

Marley won the first-ever “ToutMaster” UFC betting contest sponsored by MMAOddsBreaker and is in contention to win this year’s contest. He also appears regularly on multiple MMA betting and DFS shows. Over the past year, $100 bettors who have followed Marley’s picks are up nearly $20,000.

Just last week at UFC Fight Night 161, Marley predicted that the dangerous Niko Price (-155) would knockout out James Vick (+135) with an early strike in their middleweight bout. His assessment was spot-on, as Price ended the bout with an up-kick in the first round. Anyone who followed his advice booked an easy winner, and those who have followed consistently are way up.

Now, with UFC on ESPN 6 fast approaching, Marley has carefully studied every matchup on the card, identified the best value in the UFC odds and released his MMA picks for every single fight. He’s sharing those selections only over at SportsLine.

Marley knows the 29-year-old Reyes is seen as one of the sport’s rising stars, and his previous bout produced a decision win over former title challenger Volkan Oezdemir. His recent victories include a stoppage of Jared Cannonier, who is now a fast-rising contender in the middleweight division.

The Californian has openly talked of his desire to be considered among the sport’s elite, and on Friday he’ll be facing a former champ who once existed in that realm.

The 35-year-old Weidman was once of the UFC’s biggest superstars following his back-to-back wins over legendary former champion Anderson Silva. He defended the middleweight belt three times before a stoppage loss to Luke Rockhold in December 2015. Weidman has since struggled to get back on track, losing three of four bouts at the welterweight division, and all four of his losses have come by knockout. However, his lone victory came by submission over the dangerous Kelvin Gastelum. You can see his Weidman vs. Reyes picks only at SportsLine.

At UFC on ESPN 6, we can tell you Marley is backing Maycee Barber (-120) to defeat Gillian Robertson (+100) in a women’s flyweight clash on the main card.

Barber (7-0) seeks her third straight win in the UFC and comes off a knockout of J.J. Aldrich in March. On the other side of the UFC octagon, Robertson (7-3) knocked out Sara Frtoa in July for her second consecutive victory. “Barber will be too strong for Robertson to get takedowns consistently, and she is going to be much better than Robertson in the striking department as well,” Marley told SportsLine.

Marley also has strong picks for Reyes vs. Weidman, Stephens vs. Rodriguez and every other bout on the UFC on ESPN 6 fight card. You can only see his picks at SportsLine.

Who wins Reyes vs. Weidman? And how exactly does each fight end? Visit SportsLine now to get detailed picks on every fight at UFC on ESPN 6, all from the incomparable expert who’s up nearly $20,000 on MMA picks in the past year, and find out.