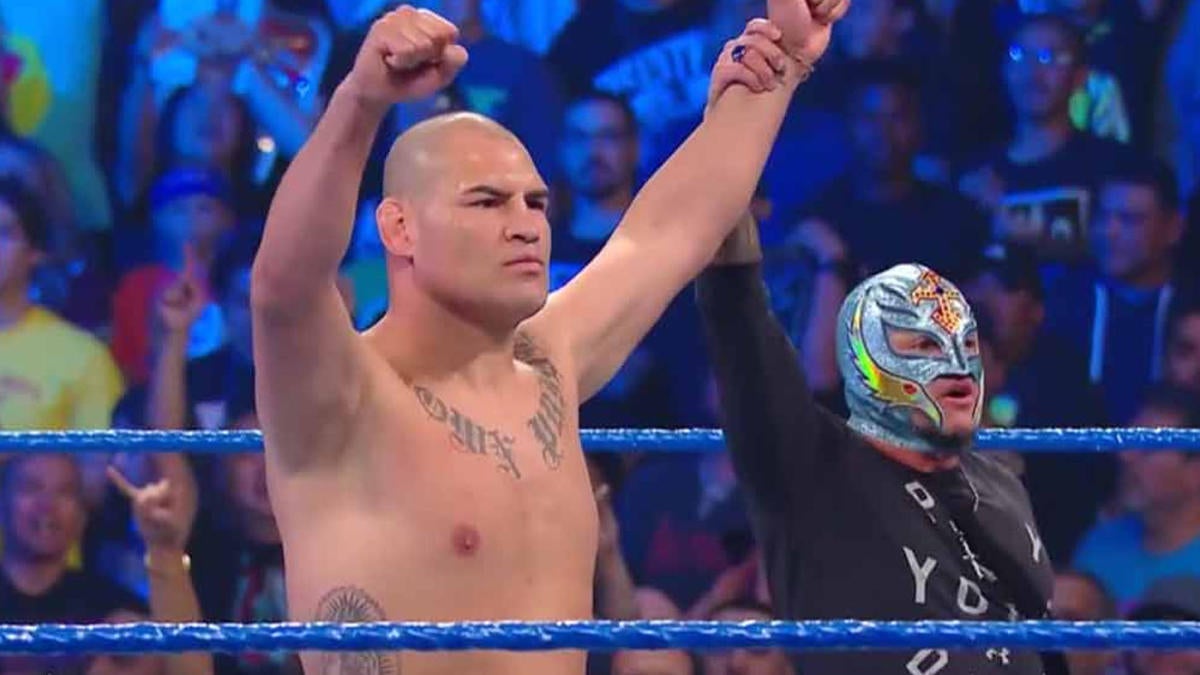 After dipping his toes in the waters of pro wrestling, Cain Velasquez has now fully jumped in by signing a deal with WWE, according to a statement released on his Twitter account. The report confirms word last week from MMAjunkie’s Mike Bohn that Velasquez had removed himself from the UFC’s USADA drug testing pool, effectively ending his MMA career with the promotion.

“I am so blessed to have been able to have a career doing something I absolutely love,” Velasquez said in his statement, which doubled as a retirement from the UFC. “I knew from the time I was a junior in college I wanted to be a fighter and after graduating from college, I set off on my journey of becoming a fighter with the goal of being UFC heavyweight champion. There are few people in this world that can say they have achieved what I have, and I am forever grateful for the opportunities and the position I held being a part of the UFC. With my official retirement from the UFC, it’s time for the next chapter.

“A year ago, when I went to my first WWE show, I fell back in love with a sport that I had watched and participated in since I was a child. From that moment, I have been doing a crash course on all things that relate to pro wrestling. I’ve been training at different gyms, going to shows and watching more matches than I would like to admit, but I can honestly say I eat, sleep and breathe wrestling now. The contract is signed and I’m on my way to my next goal which is universal champion.”

Velasquez made his WWE debut on the Oct. 4 debut of SmackDown on Fox by taking down Lesnar, landing some ground-and-pound and sending the WWE champion. Velasquez, a two-time UFC heavyweight champion, and Lesnar have history dating back to October 2010 when then-UFC champ Lesnar was dominated by Velasquez.

Subscribe to our wrestling podcast — State of Combat with Brian Campbell — and listen to our analysis of Velasquez’s transition into the WWE universe in the embed below.

Lesnar and Velasquez are set to face off in a match at WWE’s Crown Jewel pay-per-view in Riyadh, Saudi Arabia on Thursday, Oct. 31. Both men were in attendance for a press conference on Friday where the match was made official, but Velasquez’s contract status was not discussed during the proceedings which did not include questions from the media.

Velasquez had competed in Mexico’s AAA promotion on two separate occasions this year, impressing fans and wrestlers alike with his athleticism and ability to quickly pick up the complicated ways of the ring. He’d reportedly been in contact recently with upstart All Elite Wrestling as well as WWE with a full-time transition to pro wrestling clearly in his future.

“He’s definitely somebody I am keeping an eye on,” AEW executive vice president and superstar Cody Rhodes said during a recent media call. “Cain was one of those athletes … not even an athlete thing, it’s almost a strange natural ability to pick up our industry. Man, he picked it up so, so quick and he wasn’t doing mixed martial arts Cain Velasquez. He was trying to do true lucha, and he had worked with Psycho Clown … I was blown away by Cain Velasquez.”

The MMA career of Velasquez will come to an end with two heavyweight title reigns, a 14-3 record and 10 knockouts in the Octagon. Injuries, unfortunately, kept Velasquez out of competition for significant amounts of time. He has only fought once since 2016, a 26-second knockout loss against Francis Ngannou back in February.