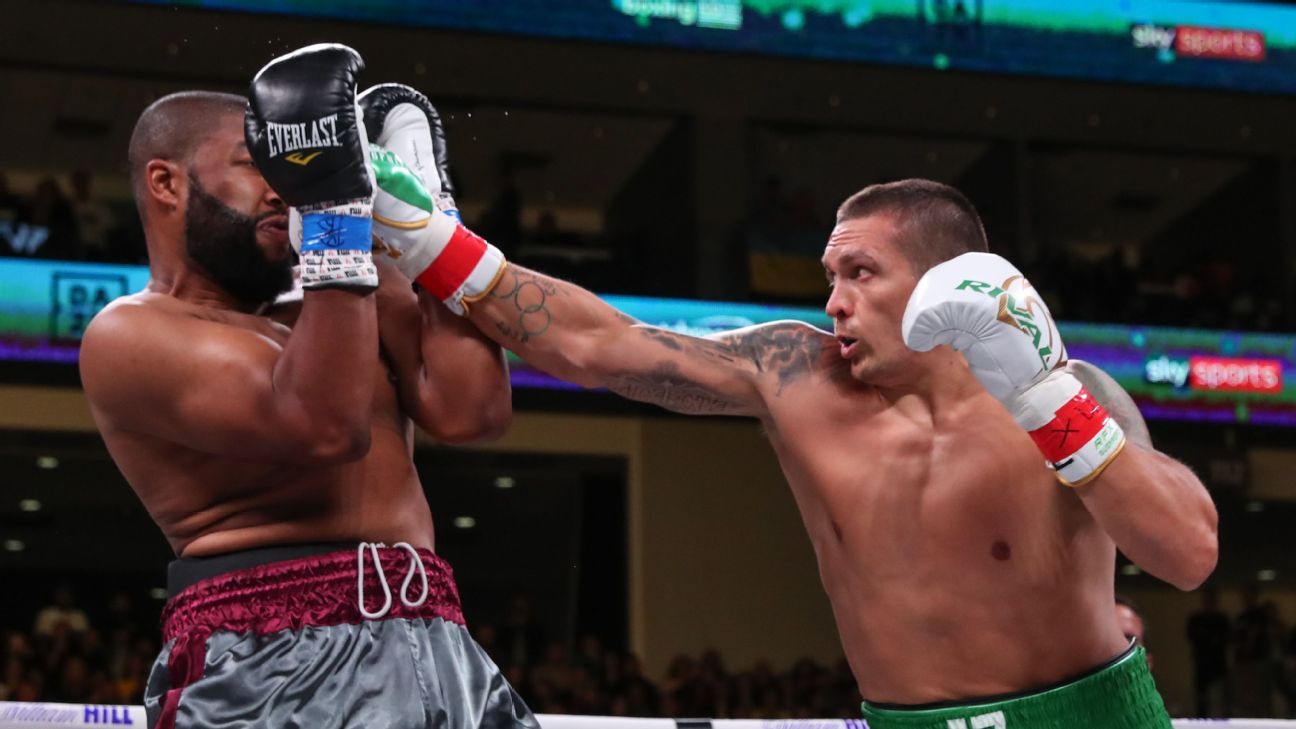 Oleksandr Usyk, the former undisputed cruiserweight world champion and the 2018 consensus fighter of the year, made a successful move to the heavyweight division to begin his chase of titles in that division on Saturday night at Wintrust Arena in Chicago.

Aiming to follow in the footsteps of his idol, former undisputed cruiserweight and heavyweight champion Evander Holyfield, Usyk got off to a strong start as he ground down late-notice opponent Chazz Witherspoon until his exhausted foe retired in the corner following the seventh round of a one-sided fight.

Usyk, who secured the heavyweight victory on manager Egis Klimas’ 55th birthday, was slated to fight former kickboxing star Tyrone Spong (14-0, 13 KOs), but Spong came up positive for the banned substance clomiphene in two urine samples collected by the Voluntary Anti-Doping Association and was dropped from the fight when the results came to light on Monday.

Philadelphia’s Witherspoon (38-4 29 KOs), 38, a second cousin of former two-time heavyweight world titlist Tim Witherspoon, took the fight when Spong was booted from the bout. He was riding an eight-fight winning streak during a sporadic fighting schedule and had not been a factor in the division for many years, since he was knocked out in the third round by then-undefeated rising contender Seth Mitchell in 2012.

But Witherspoon did have a substantial size advantage at 6-foot-4 and a career-heavy 242 pounds to Usyk’s 6-foot-3, 215 pounds. Witherspoon’s conditioning and skills, however, were no match for those of Usyk (17-0, 13 KOs), a southpaw, who was a superstar amateur, a 2012 Olympic gold medalist for Ukraine and one of boxing’s top fighters in the world pound for pound.

“I was waiting for this moment,” Usyk said. “We had some little difficulties because we have to change opponents. I didn’t show it to anybody, but I had some bad thoughts float into my head. I just prayed a little bit, I asked him to help me and it looks like he helped me.”

Usyk, the favorite of the heavily Ukrainian crowd of 9,073, was coming off the longest layoff of his career — 11 months — and took a few rounds to find a groove, but when he did he found a home for his quick right jab and straight left hand against a much slower Witherspoon.

Usyk said he felt the difference being in the ring with a heavyweight compared to a cruiserweight.

“Yes, there is a little bit of difference, but I used to fight as a heavyweight [as an amateur]. But yes, it was different,” he said.

Usyk landed many right jabs down the middle to the head and body and also landed lefts to the body. He forced Witherspoon back with a strong straight left hand in the fifth round, and appeared close to a stoppage in that round when he hurt Witherspoon with a left hand, backed him into a corner and landed several punches during a flurry that had him covering up.

Usyk, who was boxing in the United States for the third time, continued to pound Witherspoon in the seventh round. Witherspoon appeared gassed and was unable to let combinations go and spent long stretches moving along the ropes getting nailed with body shots.

Late in the round, Usyk landed a flurry of punches that had referee Hector Afu looking closely at stopping the bout, but Witherspoon made it out of the round. But he plopped down on his stool after the round and was done, telling the referee he could no longer continue.

Usyk looked as though he might have been able to finish Witherspoon sooner, but he took his time, as instructed by his corner.

“I did what my trainer told me to do,” Usyk said. “I just follow their orders and that was to box. And I did box, but if I had the opportunity, I would take that opportunity [for a knockout].”

According to CompuBox statistics, Usyk landed 139 of 347 punches (40%) and Witherspoon was limited to connecting on just 21 of 208 blows (10%). Witherspoon never landed more than the six punches he landed in the fourth round. In four of the rounds, he landed only two punches.

Usyk, 32, initially was scheduled to make his heavyweight debut against battle-tested former world title challenger Carlos Takam on May 25, but Usyk suffered a torn right biceps and was forced to delay his entrance into the division until Saturday night, when he risked his position as a mandatory challenger to get a title shot against the winner of the Dec. 7 rematch between unified heavyweight world titleholder Andy Ruiz Jr. and former titlist Anthony Joshua.

His aim is to become the undisputed champion at heavyweight as he did last year at cruiserweight, when he became the first fighter in division history to unify all four belts in the four-belt era with a one-sided unanimous decision against Murat Gassiev in the final of the World Boxing Super Series in July 2018. After defending the four belts with an eighth-round knockout of Tony Bellew in November, Usyk relinquished the titles and made the expected announcement that he was going to move up to the heavyweight division.

Now, with his debut in boxing’s marquee division behind him, he will look forward to a world title opportunity at some point in 2020 because of his status as a mandatory challenger.