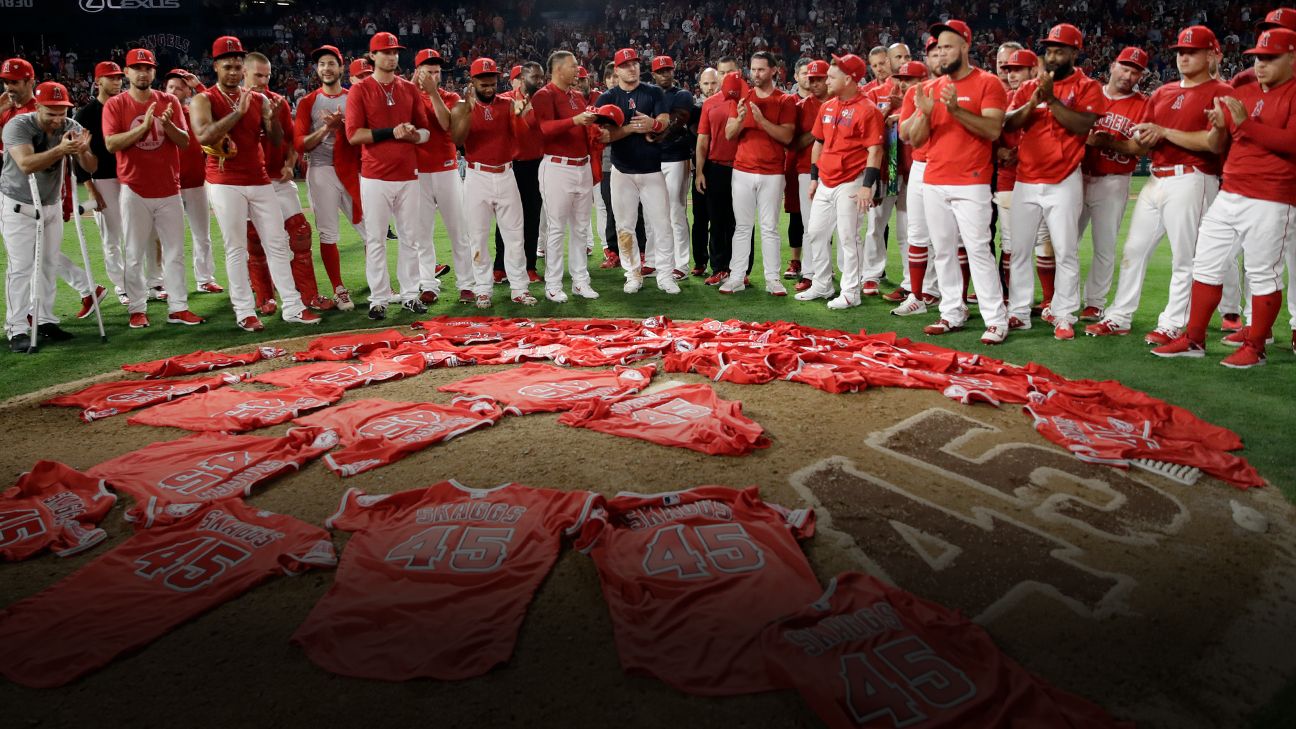 Los Angeles Angels communications director Eric Kay, who last month told U.S. Drug Enforcement Administration agents that he provided opioids to Angels pitcher Tyler Skaggs, said in a statement to Outside the Lines on Sunday that it’s “time for everyone to stand up and take responsibility.”

“I felt and continue to feel that it is time for everyone to stand up and take responsibility for their respective roles in this,” he said in the statement issued by his attorney, Michael Molfetta. “Nothing anyone does will ever provide closure for the Skaggs family. I can’t, the Angels can’t, and the courts can’t, regardless of what happens there. But at least I can help them ‘know’ instead of ‘wonder.’ My hope is that there is some peace in that for them.”

Skaggs was found dead in his Southlake, Texas, hotel room July 1. He had oxycodone, fentanyl and alcohol in his system, and he asphyxiated on his own vomit, according to an autopsy released Aug. 30.

Outside the Lines on Saturday, citing two sources with knowledge of the investigation, reported details of interviews Kay had with DEA agents from the Dallas and Los Angeles field offices in September. Molfetta confirmed those details to Outside the Lines.

Kay, on paid leave from the Angels, is currently in outpatient treatment for his own opioid addiction. Molfetta told Outside the Lines that Kay was concerned he was going to be blamed for Skaggs’ death, and said that, despite obtaining oxycodone for Skaggs for years, Kay did not think he provided the pills he says Skaggs snorted the night he died.

Kay also told DEA agents the names of five other players who he believed used opioids while they were with the Angels. Skaggs asked Kay to obtain the drugs on those players’ behalf, he told federal investigators.

Investigators learned of Kay and Skaggs’ more than four-year history of opioid abuse together after DEA agents obtained cellphone records from both men after Skaggs’ death, sources familiar with the investigation told Outside the Lines.

Kay told agents that he had an arrangement with Skaggs wherein the pitcher would give Kay money to purchase oxycodone for both of them and Kay would obtain the drugs. Outside the Lines reviewed Venmo transactions alleged to have occurred between Skaggs and Kay, which show a series of payments over two years ranging from $150 to $600. Kay’s wife, Camela, and his mother, Sandy, told Outside the Lines the payments represented drug transactions.

Sandy Kay said she asked Eric last week about his arrangement with Skaggs: “I said, ‘Why did you do it? What did you get out of it?’ He said, ‘They were $30 a pill, and Tyler paid for it.'”

Eric Kay told investigators he illegally obtained six oxycodone pills and gave three to Skaggs a day or two before the team left California for the road trip to Texas. Kay told DEA agents he does not think the pills he obtained for Skaggs were the same ones the pitcher took the day he died because Skaggs typically would ingest the pills immediately after receiving them from Kay. Skaggs also texted Kay the day the team left for Texas seeking more oxycodone, a request Kay told investigators he was unable to fulfill. Molftetta said Saturday that Kay also told agents he took pills from the same batch after that road trip and suffered no adverse effects.

Kay told DEA investigators that hours before Skaggs’ death in July, Skaggs was in his Southlake Hilton hotel room and texted Kay to visit him. Kay also told investigators that Skaggs snorted three lines of crushed opioids in front of him. Kay recognized that two of the lines could have been crushed oxycodone, but the third was not a substance he recognized. Kay said he did not take any drugs, despite being offered them by Skaggs, because he was on a medication that would have negated the effects.

Kay also told DEA agents that he told two team employees, including his then-supervisor, Tim Mead, that Skaggs was an opioid abuser. Sandy Kay told Outside the Lines that, while Eric was hospitalized for an overdose in April, she also told Mead that Skaggs was using opioids and that the team needed to intervene.

Mead, who left the Angels in June to become president of the Baseball Hall of Fame and Museum in Cooperstown, New York, told Outside the Lines no one mentioned Skaggs’ name in that conversation or that Skaggs was an opioid user at any other time.

An Angels spokesperson said the team was not aware of Skaggs’ drug use before the results of his autopsy.

On Saturday, the Skaggs family’s attorney, Rusty Hardin, said in a statement, “The Skaggs family continues to mourn the loss of a beloved son, brother, husband and son-in-law. They greatly appreciate the work that law enforcement is doing, and they are patiently awaiting the results of the investigation.”

Eric Kay’s statement Sunday did not touch upon details of his conversations with DEA agents. But he did address the national attention that Saturday’s news brought to his role in Skaggs’ life: “Watching and reading the sordid details of my own weaknesses unfold on the national stage has been nothing short of horrible. However, I am aware and respectful of the fact that my pain is entirely insignificant compared to the pain that the Skaggs family is feeling and will continue to feel for the rest of their lives.

“I made the decision to cooperate with law enforcement because I felt that it was the right thing to do. That is all I can do from this point on, if it comes with public shame and derision, I accept that.”