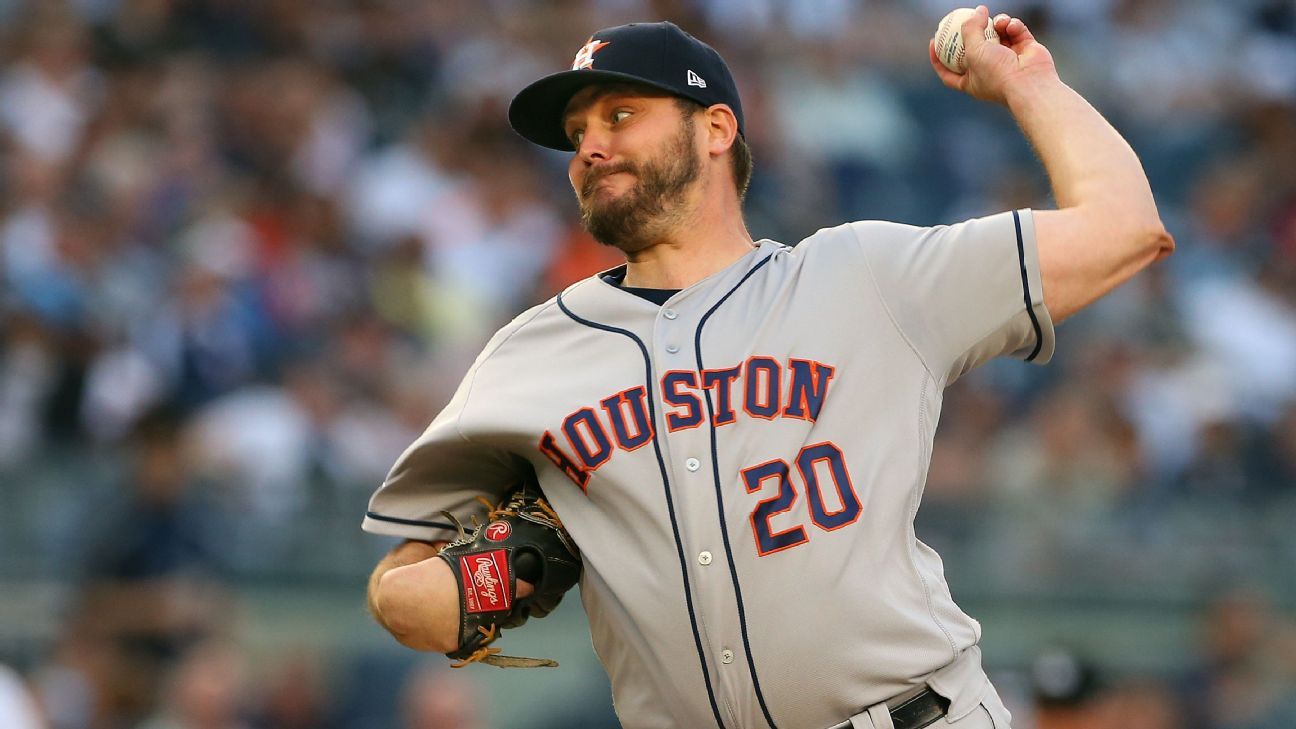 HOUSTON — Left-hander Wade Miley was left off the 25-man ALCS roster by the Houston Astros for their showdown with the New York Yankees, which begins Saturday night at Minute Maid Park.

Miley, 32, went 14-6 with a 3.98 ERA for Houston during the regular season but tailed off badly down the stretch.

Miley earned some All-Star consideration for his first half, when he went 7-4 with a 3.28 ERA over 18 starts. But during the second half, his ERA ballooned to 5.07 over 15 outings, even as his win-loss record improved to 7-2. During September, Miley bottomed out, allowed 21 runs over 11⅓ innings for a 16.68 ERA.

Still, the left-handed Miley earned a spot on the Astros’ roster for their ALDS matchup against Tampa Bay and made one appearance. He pitched 2⅔ innings in relief of Zack Greinke during Game 3 of that series, a 10-3 loss to the Rays.

The omission of Miley means that Houston will not have a left-handed pitcher on its staff against the high-powered Yankees. The only other player from Houston’s ALDS roster against Tampa Bay left off this time around was rookie utility player Myles Straw, who did not appear in the series against the Rays.

In place of Miley and Straw are righty pitchers Brad Peacock and Bryan Abreu. Abreu, a rookie reliever, posted a sparkling 1.04 ERA over 8⅔ innings with 13 strikeouts during the regular season.

The addition of Peacock adds some intrigue to the question surrounding the options for Houston manager AJ Hinch when it come to a possible Game 4 starter, a slot he said on Thursday was still “to be determined.”

Peacock, 31, missed most of the last month with shoulder problems. On Friday, Hinch stopped just short of saying Peacock would return for the ALCS: “One of the reasons we kept him off the first round was to build him up a little bit. He did his work in between. So I’d say highly likely, but until I am able to get him in front of me and talk him through what I would expect, I’d like to wait on that.”

The wait is over, it appears. With Miley’s late-season struggles, Houston had a rough time finding a viable No. 4 starter. Rookie Jose Urquidy showed promise but lacks experience, particularly during the postseason. He pitched out of the bullpen in the ALDS. The lack of a fourth starter in part spurred Hinch to start ace Justin Verlander on short rest in Game 4 against Tampa Bay, a gambit that didn’t work out, as Verlander faltered early.

Peacock went 7-6 with a 4.12 ERA during the regular season over 23 appearances, 15 of them starts. He also has postseason experience, making seven appearances during Houston’s 2017 run to the championship, including four in the World Series.

However, Peacock hasn’t started a game since June 27 and hasn’t thrown more than three innings in an outing since June 21. Hinch could choose to make Game 4 a bullpen game, he could piggyback Urquidy and Peacock, or he could again use a starter on short rest. As Hinch suggested on Thursday, his ultimate decision will depend on how the first three games play out.

But one thing we do know: Hinch’s Game 4 starter will not be Wade Miley.