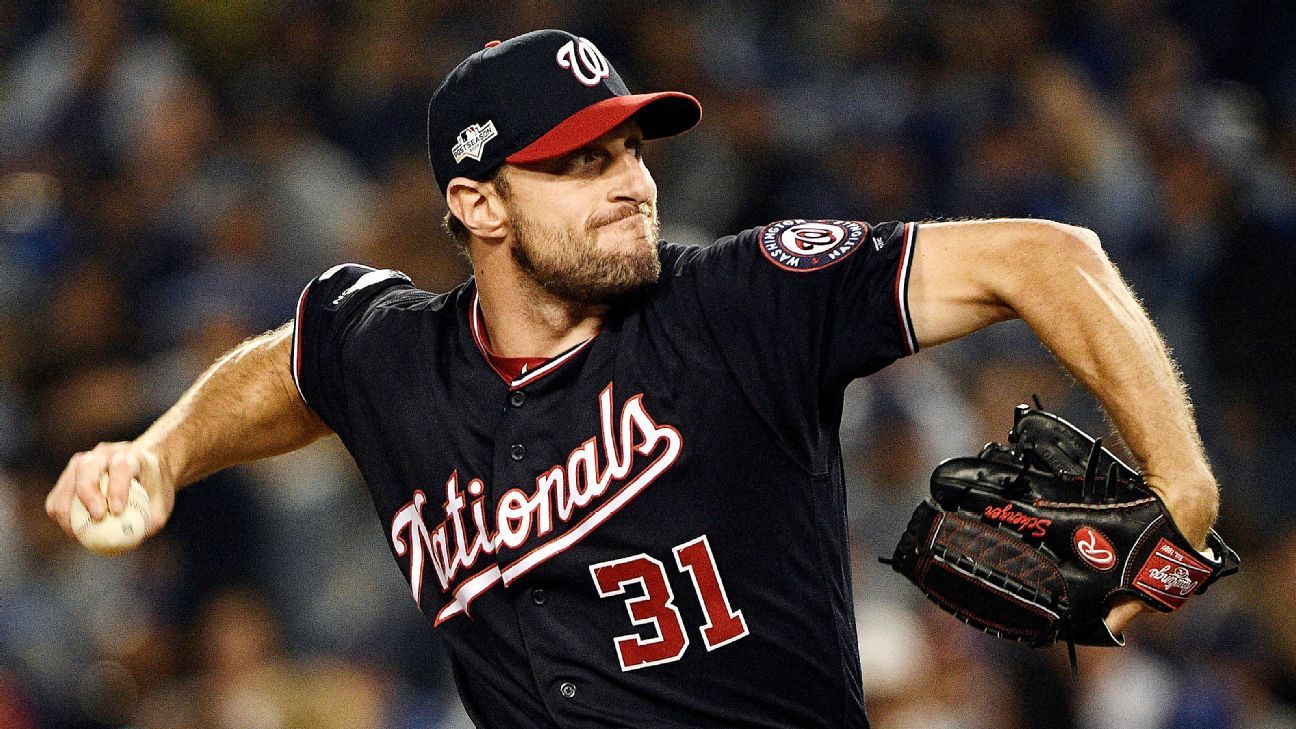 ST. LOUIS — Washington Nationals manager Dave Martinez has been creative in using his starting pitchers in relief this postseason, but don’t look to see Max Scherzer, Stephen Strasburg and Patrick Corbin in relief during the NLCS against the St. Louis Cardinals.

At least at the beginning of the series.

Scherzer, who will start Game 2 on Saturday, said before the series opener that he doesn’t expect to be used in relief.

“In the seven-game series, the way you’re set up, this is more like the regular season,” Scherzer said. “You can’t be coming out of the pen in the same form or fashion unless you’re not going to be making your start. So, for me, it’s probably just pitch Game 2 and then wait for my next start.”

Scherzer started the wild-card game against the Milwaukee Brewers and threw 77 pitches, then he pitched one inning in relief in Game 2 of the NLDS against the Los Angeles Dodgers and struck out the side. He threw 109 pitches over seven innings in winning Game 4.

He even headed down to the bullpen when Game 5 went extra innings.

Scherzer said “my arm is hanging right now” after his Game 4 start and that he still felt sore on the plane ride back to Los Angeles. He felt better playing catch before Game 5.

“When I played catch that day, I went in with a 0% chance I was going to feel good — knowing that the previous day on the flight out to Los Angeles I didn’t feel good at all,” Scherzer said. “And when I played catch I didn’t have any red flags through the elbow, the shoulder and the back — three main areas where I would be really concerned about for injury. Those actually felt pretty good.”

Strasburg appeared in relief in the wild-card game and started Games 2 and 5 of the NLDS. Patrick Corbin threw 57 pitches in relief in Games 3 and 5, so he could be in line to start Game 4 against the Cardinals.

Scherzer, Strasburg and Corbin all ranked in the top 10 in the NL in ERA and 2-3-4 in strikeouts. The Nationals’ bullpen, meanwhile, had the worst ERA ever for a playoff team.

The bullpen will be even more short-handed in Game 1 as closer Daniel Hudson will miss the game after his wife gave birth to a girl Friday morning.

Martinez laughed when told Scherzer had said he didn’t expect to pitch in relief.

“So what he’s saying is he doesn’t want to pitch in the bullpen?” Martinez asked.

Martinez, however, didn’t exactly rule out that possibility.

“I agree, we’ve got to get these guys ready to start their game, especially the first couple games here,” Martinez said. “After that, anything can happen. But I’m excited that he’s going to pitch Game 2, so let’s get him ready for Game 2.”

Scherzer missed most of July and August while battling back and shoulder injuries. He had a 5.16 ERA in September, but he held the Dodgers to one run in his Game 4 victory while striking out seven and allowing four hits.

“I feel healthy, feel great,” Scherzer said. “Really recovered off of these injuries that I had in the middle of the year and made the progression back kind of all the way through September to get to this point where I really feel good about myself and what I can do with the baseball.”