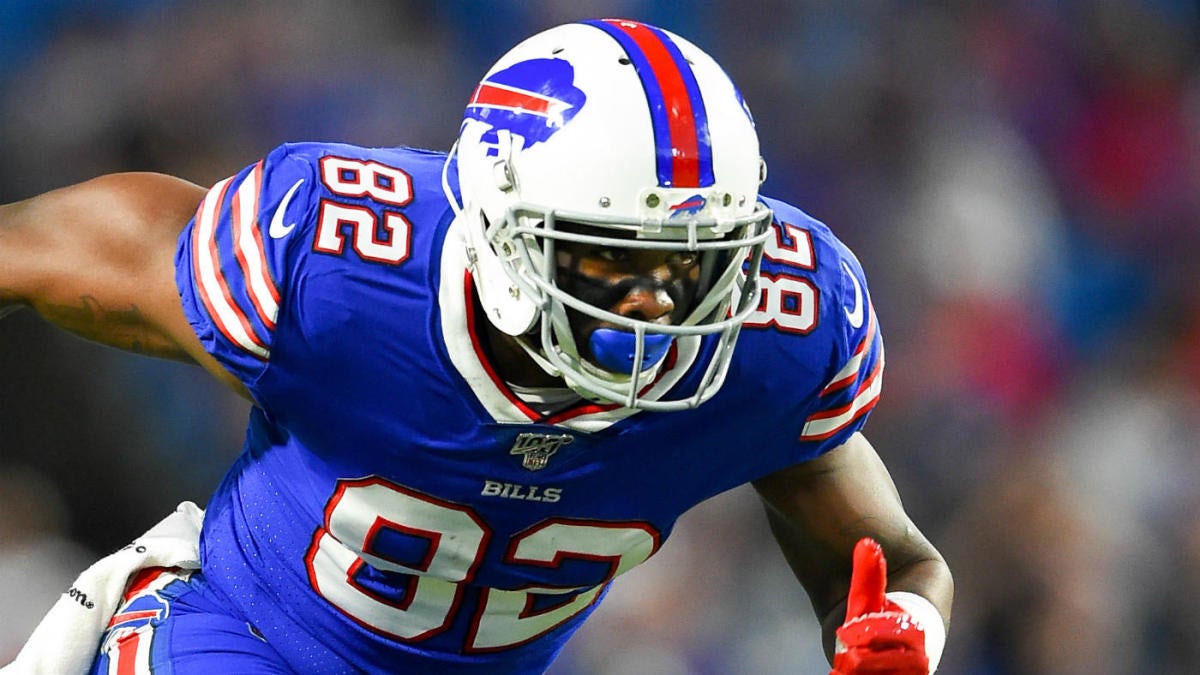 It was a glorious moment.

An alumnus of the practice squad power rankings caught a game-winning touchdown last week. Duke Williams of the Buffalo Bills, who had been a part of these rankings since their inception, was called up on Friday ahead of the team’s Week 5 tilt in Nashville against the Titans and was thrust into a full-time role.

Williams played 50 snaps to Zay Jones‘ one against Tennessee and turned four targets into four receptions — three of which went for first downs — for 29 yards and the game-winning touchdown on a slant in the fourth quarter. Williams was actually on the field more than reliable slot wideout Cole Beasley (41 snaps) in Week 5.

A few days later, Jones was traded to the Oakland Raiders for a fifth-round pick in 2021. The move was a strong statement about Jones’ inefficiency, Williams’ play against the Titans, and the plans for him for the remainder of this season and potentially beyond. And at 6-foot-2 and 229 pounds, he gives Buffalo’s offense a size element it doesn’t have with John Brown (5-10, 179) and Beasley (5-8, 175).

You won’t read many articles that lump regular season and preseason stats together. The practice squad power rankings do.

Counting the four exhibition contests in which he played this summer and the four-grab effort in Week 5, Williams has now caught 12 of 12 “catchable” targets (and 17 targets overall) for 100 yards, nine first downs, and three touchdowns. And he’s not strictly a perimeter target. Buffalo has often utilized him as a “big” slot. In the preseason, he aligned in the slot on about a third of his snaps. Against Tennessee, 60% of his snaps were in the slot. Williams’ usage and connection with Josh Allen will be worth monitoring for the rest of the season after the Bills come back from their bye in Week 7.

Week 6 has just heating up, but who’s going to win all 13 remaining games? Pete Prisco and R.J. White join Will Brinson to pick every game against the spread; listen in the player below and be sure to subscribe right here for daily NFL goodness.

These rankings will be updated throughout the season, as more players move onto practice squads while some get the call up to the 53-man roster.

Davis re-assumes the top spot after catching one pass for 11 yards in Week 4 for the Redskins before being cut, not getting re-signed to Washington’s practice squad then getting added by the Eagles’ savvy decision-makers. With DeSean Jackson still ailing, Nelson Agholor not producing at a high rate, and inconsistent play from Mack Hollins, Davis has a decent chance to eventually get the call-up in Philly.

In the preseason, the 6-foot-5, 217-pound former undrafted free agent quarterback from Northern Colorado completed 76.5% of his throws at a hefty 8.7 yards per attempt with four touchdowns and one interception. He flashed plenty of velocity of his throws — especially at the intermediate levels — good pocket patience, and impressive throw-on-the-run ability in the Vikings‘ play-action, bootleg heavy attack. Last preseason, his completion percentage was 73.0, and he threw four touchdowns without a pick.

After second-year defensive tackle Harrison Phillips went down with a torn ACL in Week 3, it was between Taylor and Kyle Peko to receive the call-up from the Bills before their massive home game against the Patriots on Sunday, and the latter was the recipient of said call. Despite missing out on a spot on Buffalo’s 53-man roster for now, Taylor remains on the team’s practice squad.

He was a sixth-round pick of the Dolphins in 2017 out of Oklahoma State, and in his final two years with the Cowboys, he had 12 sacks and 23 tackles for loss. At the combine, the 6-3, 304-pound interior defensive lineman tested solidly across the board with a 40-yard dash, broad jump, and three-cone drill all above the 56th percentile at the position. Taylor made his name as a run defender initially but showcased good hand use and a high motor as a pass rusher as well.

While playing a limited role in Miami in his first two seasons with the team, Taylor was very efficient. He recorded four tackles for loss, two sacks, and 45 total tackles on 185 snaps as a rookie and 204 snaps in 2018. He received “high-quality” grades of 84.1 and 76.3 respectively in 2017 and 2018 from Pro Football Focus.

Reaves was everywhere for the Redskins in the 2019 preseason, and his collegiate career at South Alabama foreshadowed his multi-faceted skills at the safety position. The No. 141 overall prospect on my 2018 Big Board — and No. 13 safety — went undrafted after registering at least 85 tackles in each of his final three years with a grand total of eight picks, eight forced fumbles, and 22 pass breakups in those seasons.

Despite a smaller-ish frame and average-at-best athletic ability, Reaves finds the football thanks to high-caliber instincts on the back end, and he’s a willing, reliable run defender.

Cabinda averaged 89 tackles, 5.6 tackles for loss, 3.6 pass breakups and 2.3 sacks over his final three seasons at Penn State. While he didn’t run the 40 during the pre-draft process, he didn’t appear to be a super-fast linebacker but was always around the football due to quick processing skills and an always humming motor. He displayed refined block-defeating skills with the Nittany Lions and was not a liability in coverage.

After going undrafted last year, my No. 120 overall prospect in 2018 class signed with the Raiders and saw the field late in the season. He didn’t dazzle but fared well on the inside, finishing with 21 total tackles and a “high quality” PFF grade of 73.6 on his 164 defensive snaps. In the 2019 preseason, Cabinda missed some tackles, which likely led to his release by the Raiders, but he has the mental ability and polished skills to sift through traffic to be a quality backup at the middle linebacker position.

Johnson was my No. 61 overall prospect and No. 10 wide receiver in the 2019 class. I loved the completeness of his game at nearly 6-2 and 208 pounds while at Buffalo. He won in traditional chain-mover type ways: shielding with his body, strong hands in tight coverage. He was impressive tracking the football down the field and excelled after the catch in a deceptive way. He accounted for a whopping 39.7% of the Bulls’ receiving yards as a junior and 32% in an injury-riddled senior campaign. Johnson, who’s Jadeveon Clowney’s cousin, finds himself on a Chargers team dealing with plenty of injuries of its own, and Mike Williams could miss time.

Per PFF, Johnson had the fifth-best contested-catch percentage among draft-eligible receivers in 2019 and the second-best yards per route run average in 2017 and 2018 combine, behind only first-round pick Marquise Brown. While Johnson didn’t have a monstrous preseason, I believe he could be plugged into a part-time role for Los Angeles and contribute in a variety of ways as a rookie.

Melifonwu played five regular-season snaps for New England a season ago and registered a tackle and allowed one catch for 5 yards. There’s plenty of mystery surrounding him, as he barely saw the field with the Raiders after they made him the No. 56 overall selection in the 2017 Draft. It wouldn’t shock me in the least if Belichick got the most out of him if and when he sees the field.

Mitchell was the unquestioned top target for Justin Herbert in 2018. He accounted for a very encouraging 36.7% of Oregon’s receiving yards and scored 10 touchdowns. His game is predicated on slippery movements at the line and especially after the catch. Also, Mitchell is fast down the field. He ran 4.46 at the combine and tracks the football well on those long balls. He was my No. 58 overall prospect and No. 9 wideout in the 2019 class.

Mitchell only made one reception for 10 yards in the preseason, which is why he’s lower on this list than his pre-draft ranking would indicate. The Vikings seemingly want to ride Dalvin Cook in 2019, but there isn’t much depth behind Adam Thielen and Stefon Diggs at receiver on Minnesota roster, meaning the 6-1, 197-pounder has a decent chance to get a call up at some point during the season.

Wesley was a clear redshirt candidate, simply because of his spindly frame. At the combine, he measured in at just over 6-4 and 206 pounds. At Texas Tech, Wesley was as natural of a hands-catcher as I scouted in this past year’s draft class. I’m serious. And with incredibly long 34-inch arms, mitts just under 10 inches, and a 37-inch vertical, Wesley boasts a mammoth catch radius. He had over 1,400 yards and accounted for a solid 33.3% of Texas Tech’s receiving yards in 2018.

The former Red Raider had three catches for 60 yards in the preseason, and I view him on a similar track to that of one of Baltimore’s fourth-round picks in 2018, Jaleel Scott, a lanky, ball-skills specialist who took advantage of his redshirt year (due to injury) and got stronger heading into Year 2. Scott looked the part in exhibition games this summer, as he led the Ravens in receiving. Wesley can be that type of matchup-problem wideout down the road.

TERRY BECKNER, DT, MISSOURI: Beckner was my No. 11 defensive tackle and No. 107 overall prospect in the 2019 class after a consistent career at Missouri. He had 22 tackles for loss and 10.5 sacks in his final two seasons with the Tigers and tallied three sacks and eight tackles for loss as a freshman in 2015.

Because he’s a poor athlete for the position, Beckner is forced to win with heavy hands and a non-stop motor. I loved those two elements of his game, and despite his limited physical profile, and the fact he went undrafted but is currently on the Buccaneers‘ practice squad is a testament to his polished hand use and on-field energy.