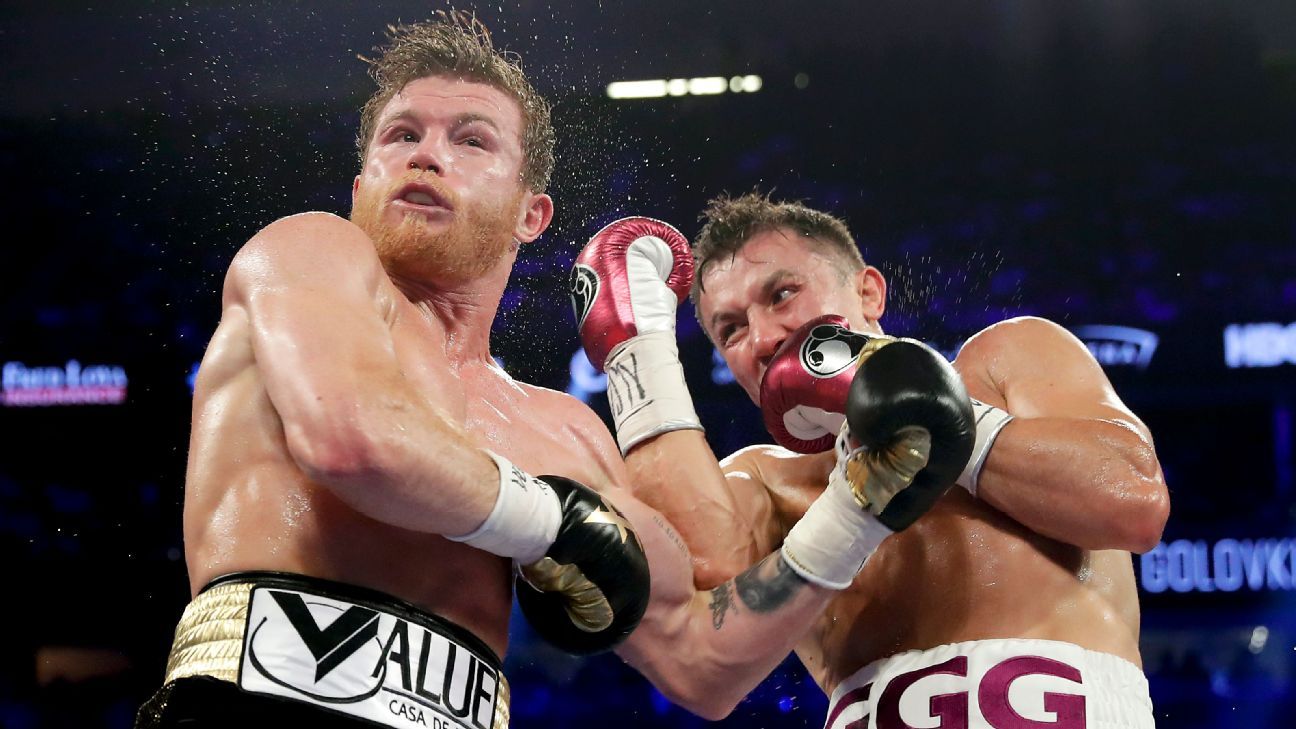 Middleweight world champion Canelo Alvarez is preparing for his move up to light heavyweight to challenge for a world title in a fourth weight division, but he did take time out to watch rival Gennadiy Golovkin’s recent fight and came away unimpressed.

Golovkin won a disputed unanimous decision over Sergiy Derevyanchenko — 115-112, 115-112 and 114-113 — this past Saturday night at Madison Square Garden in New York to claim a vacant middleweight world title that had been stripped from Alvarez for not finalizing a deal with mandatory challenger Derevyanchenko.

Many thought Derevyanchenko deserved to have his hand raised at the end of the action-packed contender for fight of the year, including Alvarez.

“We saw it. Obviously for me, Derevyanchenko won the fight,” Alvarez said through an interpreter on Thursday during a teleconference with boxing reporters, mainly to discuss his challenge against light heavyweight world titlist Sergey Kovalev on Nov. 2 (DAZN) at the MGM Grand Garden Arena in Las Vegas.

“It was a fight where (Derevyanchenko) really looked well,” Alvarez said. “It was his fight. Regarding Triple G, we all know, everyone knows, it’s unnecessary to say more, but he looked slow, and I think I gave everyone the pathway to see how to hurt him, which is (to) the body, and that’s what we saw.”

Alvarez is 1-0-1 in two heavily disputed mega fights with Golovkin, who is now his bitter rival after a friendly promotion of their first fight that resulted in a draw in 2017 that most thought Golovkin won. Alvarez won the rematch by majority decision in 2018 in a fight that was delayed while Alvarez served a six-month suspension for testing positive for a banned substance.

Golovkin has desperately wanted a third showdown as has DAZN, the broadcaster with which each man has a nine-figure deal. But Alvarez said he is simply not interested in going over that ground again.

“However, what he does represent is some good business, so if they offer me something really good, maybe the third fight can happen. But for me, no, because he represents no challenge for me.”

Alvarez is heading into the third fight of his 11-fight, five-year, $365 million deal with DAZN, which signed Golovkin in the hopes of getting the third fight. But so far Alvarez has denied DAZN and Golovkin the fight.

“I always know what I want, and what I want is what I’m doing now,” Alvarez said. “They may have wanted the Triple G fight, but as I said before, he represents no challenge for me, so I didn’t feel any pressure (to make the third fight).”

Instead, Alvarez (51-1-2, 34 KOs) said he is focused on the much bigger Kovalev (34-3-1, 28 KOs), who may be past his best days but remains a formidable opponent and a devastating puncher with a title belt that Alvarez wants.

Alvarez did not demand a catch weight for the bout, instead agreeing to a contract weight of the 175-pound division limit. Alvarez, the naturally smaller man, said he plans to come in at the division limit, not lighter as many might have expected.

“I will be on weight at 175 pounds. That’s what I’m going to weigh, 175 pounds,” said Alvarez, who has never weighed more than the 167¼ pounds he weighed for his secondary super middleweight title victory over Rocky Fielding in December. “God willing, that’s what we’re working on.”

Golden Boy CEO Oscar De La Hoya, Alvarez’s promoter, said the fact that Alvarez did not try to force Kovalev to come in under the division limit — which he could have demanded as the A-side of the fight — is a testament to his desire to make history, no strings attached.

“It shows who he is,” De La Hoya said, adding that Alvarez never asked for him to try to get three-time light heavyweight titlist Kovalev to accept a catch weight. “It shows his character. It shows what he wants to accomplish in the sport, and that’s to make history and to one day be considered the best in the business.”

Alvarez has won titles at junior middleweight, middleweight and super middleweight, where he holds a secondary belt. But he said he is unsure which division he will box in following the fight with Kovalev. If he wins he would hold belts at 160, 168 and 175 and could look to defend any of them.

“We are focused on 100% on this fight. Afterward we’ll see what follows,” Alvarez said.

But one opponent Alvarez said he has no interest in facing is Demetrius Andrade in a middleweight title unification fight.

“The truth is he hasn’t fought with anyone, hasn’t fought against anyone, and he’s also boring, very boring,” Alvarez said of the slick-boxing left-hander from Providence, Rhode Island. “Maybe he’s a good fighter, but he’s a boring fighter, and at the end of the day, when there’s a boring fight, people are going to blame me. I like fights where there’s action, where people can enjoy a good show. That’s very important for me. But also he doesn’t represent a challenge for me, as well, because he hasn’t fought against anybody.”

Andrade (28-0, 17 KOs), who has made two dominating middleweight title defenses, won a world title at junior middleweight and represented the United States in the 2008 Olympics, has been avoided by top opponents for years.

He has wanted to fight Alvarez or Golovkin and when he heard about Alvarez’s comments, he went off on social media.

“Canelo, stop talking out ya ass,” he wrote. “If u don’t believe I’m a challenge u would have unified w/ me in September for undisputed! … You can’t duck forever. Put ya big boy gloves on and fight me!”