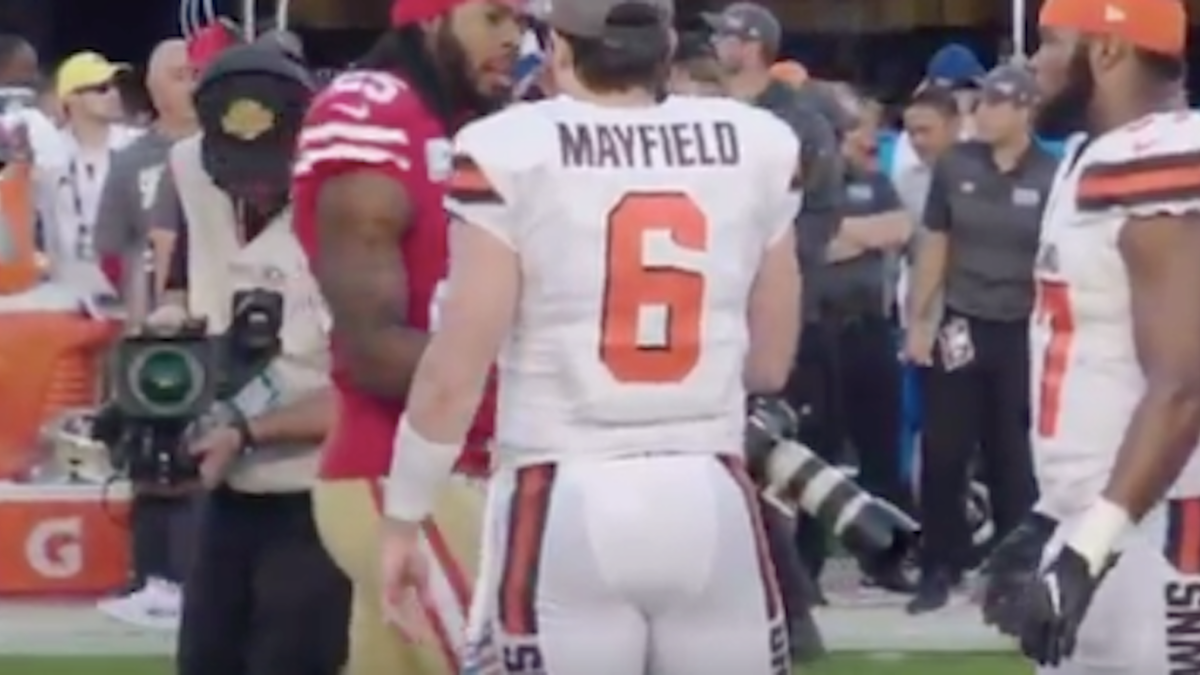 The Dumbest NFL Controversy of the Year was locked down early in 2019, thanks to the extremely annoying “Dapgate” battle between Richard Sherman and Baker Mayfield, in which the 49ers cornerback accused the Browns quarterback of refusing to shake his hand prior to their Monday night matchup.

An article from Mike Silver of NFL Media quoted Sherman as saying Mayfield wouldn’t shake his hand before the game when the two captains met at midfield for the coin flip. Video evidence quickly contradicted Sherman’s claim and the cornerback was forced to backpeddle faster than he would guarding Odell Beckham on a go route.

On Wednesday, Sherman appeared on Pat McAfee’s streaming show on DAZN and flat-out apologized for incorrectly stating what happened in the situation. Asked if he would apologize directly to Mayfield, Sherman confirmed he would.

“It’s definitely my bad. I never want anybody to deal with some s— that they didn’t do,” Sherman said. “So the questions that he’s going to get and the annoying nonsense questions about a game that’s already been done. Sure, he’ll get an apology for that. I’ll probably reach out to him via text or social media to actually get a hold of him to talk to him in person, I mean on the phone.

“But yeah, yeah, cause that sucks. But first off, that was a great name y’all came up with. Dapgate? I was crying laughing. But, yeah, yeah, he definitely deserves an apology.”

This is just the weirdest, dumbest situation in football. There are multiple videos of Baker shaking Sherman’s hand before the coin toss happened. And then after the coin toss — literally seconds after the first handshake — Baker sprinted to the sideline to get ready to play the game.

As Brady Quinn noted on the Pick Six Podcast on Wednesday, there is typically a “hey bro / be safe / play well” moment post toss. But there are also not exactly lockstep standards for how to handle things pre- and post-toss. It’s sort of nebulous.

But there was clear video of Sherman and Baker shaking hands at some point prior to the game.

It’s just really hard to imagine the cornerback getting so worked up about this when he shook Baker’s hand. My theory on this is Sherman came into the game already mad about Baker being considered, ahem, confident. He didn’t like him to begin with. So he extrapolated one perceived pregame slight and blew it up into an entire “psych everyone up” thing with his defense.

Sherman’s explanation to McAfee could echo that.

“Sometimes you remember things a little differently than it happened,” Sherman said. “Obviously it still motivated me the same way.”

Then, as Sherman later told Silver, they put “a foot up his ass.” That part is not a lie and needs no apologizing. The Browns were annihilated and embarrassed by the 49ers in primetime.

Cleveland has much bigger problems to worry about than whether or not the quarterback is shaking hands. Kudos to the Browns for actually going dark on this matter and letting Sherman deal with it on his own. Baker diving into the mud here on a short week with the Seahawks coming to town would be a … dangerous move at best. The Browns need him locked and loaded for a borderline must-win game.

Maybe Sherman can include some tips on beating Pete Carroll’s defense as part of the apology.