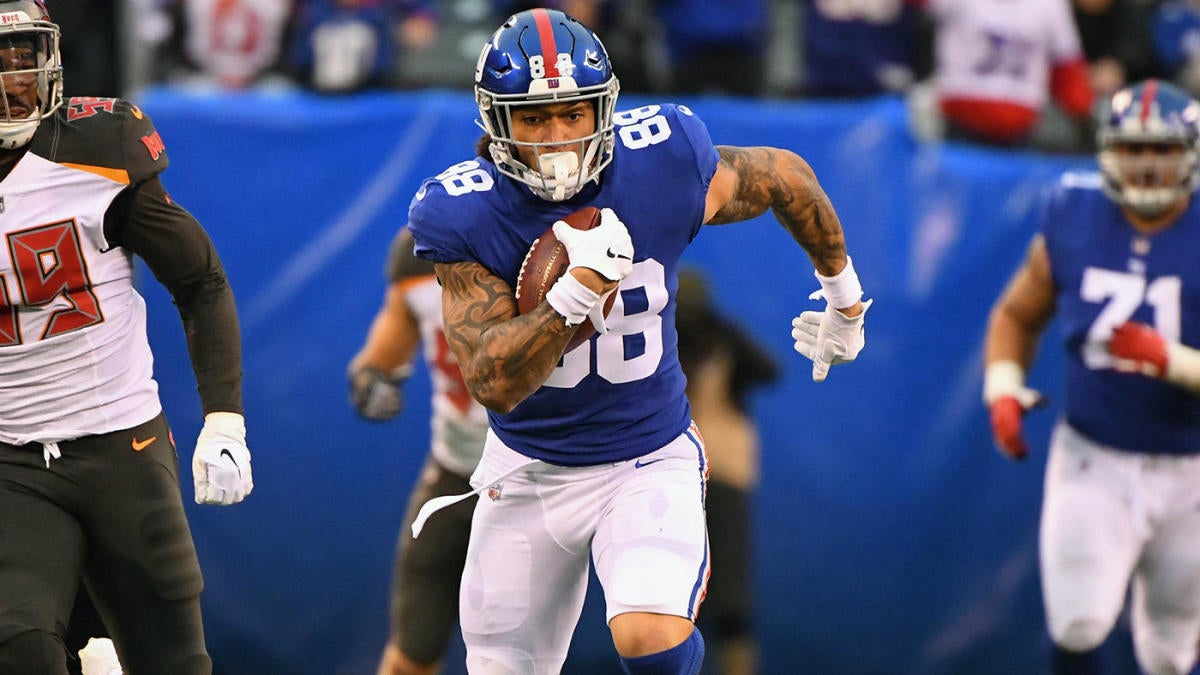 Injuries are set to play a big part in that contest on Thursday, and the same case can be made throughout the league as there are a number of notable names listed in the initial injury reports to start the week. Those names include Panthers star running back Christian McCaffrey, Bucs wideout Chris Godwin and Jags cornerback Jalen Ramsey.

To find out more on those injuries and others like them, here’s a complete rundown of the most newsworthy names on this week’s injury report, which we’ll update leading into Week 6:

New York’s offensive weapons have vanished right before Daniel Jones‘ eyes. Golden Tate will still be there in the passing game, but Jon Hilliman and Elijhaa Penny will have to carry the load in the backfield, which makes an already tough matchup that much more difficult.

Dorsett missing out on Thursday’s matchup was to be expected after the receiver didn’t practice all week. As for the other two questionable receivers in Edelman and Gordon, it’d be a surprise if they did not suit up against the Giants.

Panthers (-2) vs. Buccaneers in London

The Panthers were without star running back Christian McCaffrey during practice due to a back injury. It’s being qualified as simply a veteran’s day off, but McCaffrey did land hard on his back after a score in Week 5 and the fact that the team is listing that as his injury designation is notable. That said, there doesn’t seem to be any real doubt at this point that he’d miss their Week 6 game against the Bucs in London. Second round pick Greg Little also didn’t practice as he’s still dealing with a concussion that kept him out of Week 5, but head coach Ron Rivera did say that he’s expected to make the trip with the team. Corner Donte Jackson (groin) did practice fully.

As for the Bucs, defensive lineman Ndamukong Suh was held out of practice due to a knee injury, while starting right tackle Josh Wells missed practice as he was tending to the birth of his child. Receiver Chris Godwin was limited due to a hip injury.

With Cincinnati, receiver Alex Erickson (concussion), offensive tackle Cordy Glenn (concussion) and linebacker Nick Vigil were all limited in practice. For Glenn, he’s been sidelined since the preseason with that concussion and has been out every since. A.J. Green continues to sit out of practice with that ankle injury. Kicker Randy Bullock (back) was a full participant.

As it seemingly goes every week, Baltimore held out starting tight end Mark Andrews from practice as he deals with that foot injury. This has been standard practice for Andrews for the bulk of the season, so outside of any setbacks he should be good to go. Marquise Brown was also absent from practice with an ankle injury.

Cleveland saw one of their smaller injury reports in quite some time. Odell Beckham Jr (hip) was a full participant, while Denzel Ward (hamstring) and Greedy Williams (hamstring) were among those limited during the session. At this point, it appears like the Browns could have everyone on the active roster at their disposal heading into a pivotal Week 6 matchup.

The Texans gave star receiver DeAndre Hopkins (rest) a light day as he was limited in practiced. Fellow receiver Kenny Stills, who missed last week’s contest, was limited with his hamstring injury.

The left side of the offensive line for Kansas City is missing two key pieces as starting left tackle Eric Fisher (groin) missed practice yet again, while starting left guard Andrew Wylie also was sidelined after suffering an ankle injury that forced him out of Week 5 vs. the Colts. Sammy Watkins missed practice due to a hamstring injury, but Tyreek Hill was limited as he tries to mount a comeback from his shoulder injury that kept him out for the bulk of the season. Meanwhile, Patrick Mahomes was a full participant, but is listed with an ankle injury, which he suffered last weekend.

After missing Week 5 due to a neck injury that he suffered against the Cowboys in Week 4, Saints defensive end Trey Hendrickson was a limited participant in practice. As expected, Drew Brees didn’t practice and neither did receiver Tre’Quan Smith, who left Week 5 late in the fourth quarter with an ankle injury.

The most significant injury news coming out of either respective camp surrounds corner Jalen Ramsey, who practiced on a limited basis with the Jaguars. This comes just two days after he saw a specialist regarding his back. It’s a bit early to say whether or not he’ll be ready to play on Sunday, but this is certainly a step in the right direction. Defensive lineman Calais Campbell was limited in practice, but the team is simply noting that it’s a veteran day and it’s not injury related.

Cornerback Orlando Scandrick was missing from Eagles practice due to an illness, while fellow corner Sidney Jones was a full participant with his hamstring injury. DeSean Jackson continues to be sidelined during practice due to his abdomen injury; ESPN’s Tim McManus reports that he’s expected to be out for Week 6, but has hopes of returning for Week 7 against the Cowboys.

The Vikings were missing a trio of starters during Wednesday’s initial practice. They were without starting right guard Josh Kline (foot) and nose tackle Linval Joseph (not injury related), while linebacker Ben Gedeon was missing after leaving Week 5 due to a concussion. The good news for Minnesota is that corner Mackensie Alexander was limited in practice after missing Week 5.

Washington was without Jordan Reed (concussion) once again, while starting left tackle Donald Penn (hamstring) also didn’t practice. The big news, however, for the Redskins is that Case Keenum practiced fully and will be the starting quarterback, sending Colt McCoy back to the bench.

Miami had full attendance at practice on Wednesday leading up to their Tank Bowl against the Redskins. Receivers Albert Wilson (calf, hip) and Jakeem Grant were among the notable players limited along with cornerback Xavien Howard (knee) and safety Bobby McCain (hamstring, shoulder). Defensive end Charles Harris (wrist) practiced fully.

Kyle Shanahan announced on Wednesday that starting right tackle Mike McGlinchey is having a knee scope after suffering the injury during their Monday Night Football win over the Browns. The injury will sideline McGlinchey for four-to-six weeks, and Daniel Brunskill will start in his place.

With the Rams, running back Todd Gurley did not practice due to a quad injury and was joined by linebacker Clay Matthews (jaw), corner Aqib Talib (ribs) and linebacker Natrez Patrick (hamstring) on the sideline. Wideout Brandin Cooks (concussion) was among those limited.

The Falcons didn’t have Julio Jones out there at practice to start the week due to a hip injury, and top corner Desmond Trufant (toe) sat as well. Center Alex Mack (elbow) was among three players limited, but guard Jamon Brown was able to practice in full as he recovers from a concussion.

The Cardinals had a lengthy injury report on Wednesday, with six players out due to injury and another four limited. Running back David Johnson (back) headlines the players who missed practice due to injury, while edge rusher Terrell Suggs (back) was also held out. Receiver Christian Kirk was able to participate in a limited fashion as he recovers from his ankle injury.

Cowboys starting left tackle Tyron Smith (ankle) still wasn’t able to practice and neither was linebacker Leighton Vander Esch (illness) or tackle La’el Collins (knee). Amari Cooper was limited with ankle and quad injuries, but there is no serious doubt for his status on Sunday. Fellow receiver Michael Gallup also appears to be recovering well after his first game back as he was a full participant in practice.

The good news for the Jets is that quarterback Sam Darnold has been completely taken off the injury report and is slated to start for New York this weekend against Dallas. Still, they were without star linebacker C.J. Mosley (groin), while defensive tackle Quinnen Williams (ankle) was limited. Receiver Robby Anderson (back) was a full participant in practice and Demaryius Thomas (hamstring, knee) was limited.

With the Titans, guard Kevin Pamphile (knee) was a limited participant in practice, while tight end Delanie Walker (knee) and linebacker Cameron Wake (hamstring) were among those who did not suit up.

The Broncos had their two key receivers in Emmanuel Sanders (knee) and Courtland Sutton (lower leg) limited on Wednesday. The big surprise on the day, however, was that rookie linebacker Justin Hollins was able to practiced on a limited basis after suffering a knee injury in Week 5. Head coach Vic Fangio said Hollins would be week-to-week on Monday, but clearly he’s making strong strides.

The Steelers got some good news with quarterback Mason Rudolph after a scary hit to the head that knocked him out of Week 5. On Wednesday, the second year signal caller was actually able to return to practice on a limited and take some reps with the scout team. He is still in concussion protocol, but this is a tremendous step for Rudolph. Devlin Hodges, meanwhile, took all the first-team reps in practice. Running back Jaylen Samuels, meanwhile did not practice due to a knee injury and will miss around a month after undergoing a scope on that knee.

The Chargers saw some significant progress with tight end Hunter Henry, who has been out due to a knee injury, as he practiced on a limited basis on Wednesday. Casey Hayward Jr. was also limited, while kicker Michael Badgley (right groin) and Melvin Ingram (hamstring) did not practice. Los Angeles also announced on Wednesday that center Mike Pouncey will land on injured reserve and is out for the season with a neck injury.