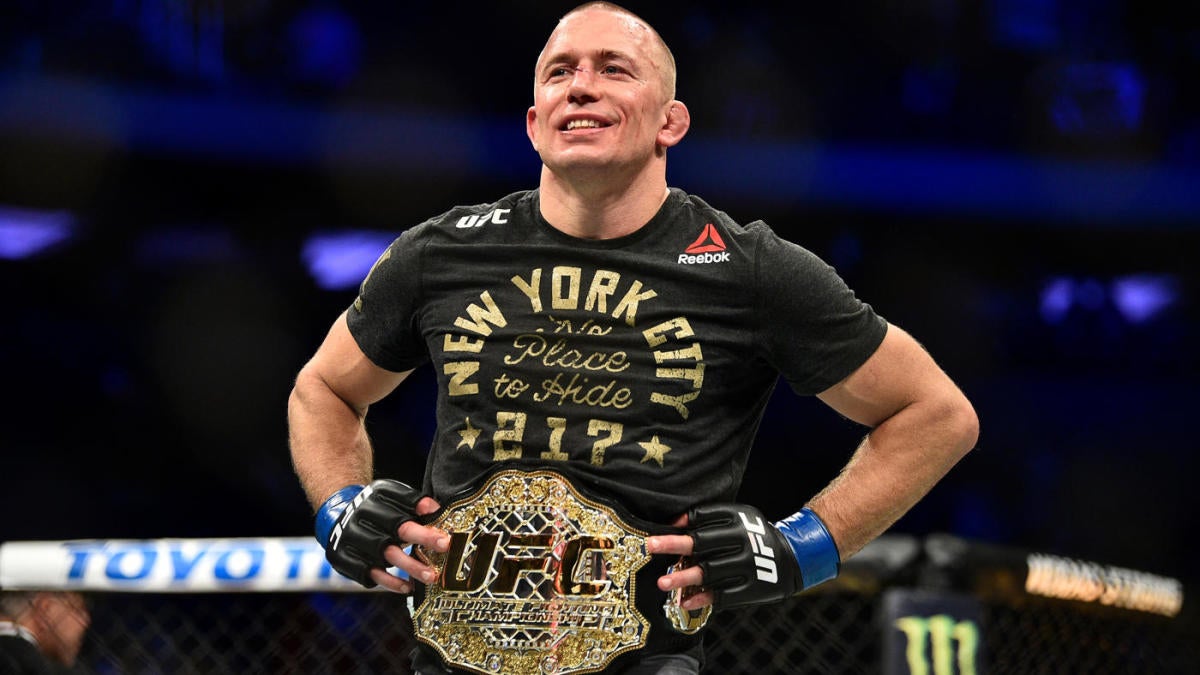 There is a weight class in UFC with a dominant, undefeated champion littered with ranked opposition who have yet to have their shot at the belt. Yet, for some reason, fans, media and now even UFC president Dana White seem to be warming to the idea of a retired former two-division champion — who has never fought at the weight — jumping the line for a title shot.

This is the story of the proposed mega-fight between UFC lightweight champ Khabib Nurmagomedov and former welterweight and middleweight champ Georges St-Pierre.

Nurmagomedov (28-0) has been spectacular throughout his career. He has roundly dominated some of the top talent to ever step foot in the Octagon and has, for the most part, made it look easy. Despite his dominance, one can’t claim Nurmagomedov has “cleared out” the lightweight division.

There’s the looming fight with Tony Ferguson (25-3), a fight that has been booked and canceled four times now but remains the logical next fight for both men with Nurmagomedov’s undefeated record and Ferguson’s 12 consecutive victories. Waiting in the wings is Justin Gaethje, ranked No. 4 in the CBS Sports Divisional Rankings and coming off a first-round dusting of Donald Cerrone in September.

Nurmagomedov has not fought more than twice in a year since 2013, meaning bouts with Ferguson and Gaethje would fill his 2020 calendar.

While those fights take place, the next tier of lightweights will have the opportunity to sort out their own cases in a loaded division. Fast-rising Dan Hooker (19-8) just made easy work of top 10 ranked Al Iaquinta and undefeated Gregor Gillespie (13-0) has the chance to make a big statement when he faces Kevin Lee on Nov. 2. A big 2020 from either man and Nurmagomedov has another potential challenger set.

And that’s all without taking into account former interim champ Dustin Poirier — who fell short against Nurmagomedov at UFC 242 but could work his way back to a title shot — and the inevitable return of Conor McGregor, who was dominated by Nurmagomedov at UFC 229 but would be a truly earned big-money rematch with a few victories in his comeback effort.

So, where does St-Pierre fit into the division?

The short answer is: he doesn’t.

St-Pierre is, without question, one of the all-time greats. His dominant run as welterweight champ, charming personality and good looks made him a superstar. There was a time when St-Pierre’s run at 170 and then-middleweight champ Anderson Silva’s run at 185 had fans clamoring for a superfight that never came to fruition. But that was after both champions cleared out their own divisions, leaving both with sub-optimal partners in the cage and a unique challenge just 15 pounds away.

St-Pierre’s return at middleweight to capture the championship from Michael Bisping set the division back. He captured the belt from Bisping, vacated the title after 33 days and Robert Whittaker was promoted to undisputed champion. Whittaker then beat Yoel Romero in a non-title fight after Romero failed to make weight before Whittaker was plagued by health issues that kept him out of the cage.

Israel Adesanya would capture the interim middleweight belt while Whittaker was sidelined and eventually defeated Whittaker this past weekend in the main event of UFC 243 to become undisputed champion. That fight was the first clash for the undisputed middleweight championship since Bisping vs. St-Pierre in November 2017. Effectively, St-Pierre’s injection into the middleweight mix led to an almost two-year period of muddiness at the top of the division.

The lightweight outlook is as rosy as any division in recent memory. The king has years of fights ahead of him featuring legitimate challengers and big-time showdowns. St-Pierre would serve as little more than poison for the division, all in the name of a one-off pop at the box office. Win or lose, Nurmagomedov would be taken away from the fights that matter and top challengers would be forced into “stay busy” fights or kept on the shelf waiting as the once-great Canadian alters the timeline.

White seemed to know this prior to a recent change of heart. He’d previously said the UFC would “never” make a fight between St-Pierre and Nurmagomedov. Earlier this month, however, he changed his tune, saying the fight would be “fun to make” after Khabib faces off with Ferguson.

In the interest of keeping an intriguing division ticking along, fans should hope short-sighted “fun” and a splashy pay-per-view buy rate doesn’t win out over the good of an entire division.