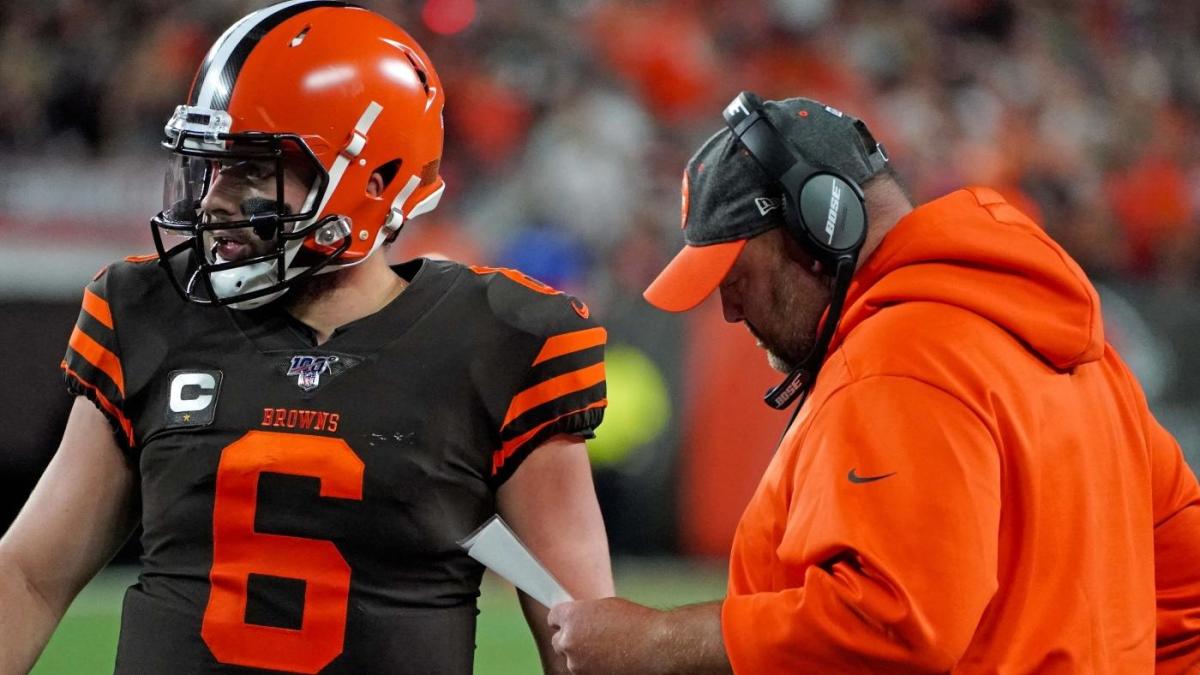 The Cleveland Browns hype train was already rolling when Odell Beckham Jr. jumped on this offseason. It appears that the Browns may have been buying in to that ideology as well. Through five games, reality has set in; they have a head coach in over his head, a young quarterback not trusting his offensive line, poor defensive execution and play-calling that suggests an identity crisis.

After parting ways with Hue Jackson and interim head coach Gregg Williams, the Browns made the decision to promote offensive coordinator Freddie Kitchens. Kitchens had guided an innovative offense led by rookie quarterback Baker Mayfield down the stretch last season. The keys to their success would not be carried over to 2019, however.

Cleveland opened the season wanting to be the team that everyone expected them to be. They wanted to throw the ball 50 times to their talented wide receivers. The issue was that their success in 2018 was grounded in the run game. The play-action passes and motions were set up by Nick Chubb’s success.

In their opening loss to the Titans, the Browns threw seven passes and ran just twice on their opening possession but it led to a touchdown. Beckham was targeted three times on that drive alone. They were forcing him the football and that would be a theme. Rather than deploying Chubb and the 12 or 13 personnel (one back, two or three tight ends) that made them successful last season, they were running a lot of four and five wide sets with the intent to throw the ball. It resulted in three interceptions. In fairness, they placed starting tight end David Njoku on the Injured Reserve and Demetrius Harris‘ attempt to block rookie Nick Bosa Monday night was destined to fail from the beginning based on his approach.

It is a problem exacerbated by the play of Mayfield and the offensive line. Early in the season, the quarterback was bailing from the pocket and throwing fade away passes. It showed a lack of confidence in his offensive line. Through five games, Mayfield has been sacked sixteen times, which is No. 8 in the NFL. He was hit five times by Bosa alone. It does not seem terrible until you consider that three of their opponents (Rams, Ravens and Jets) all rank in the bottom half of the league in terms of sacks recorded.

In the Baltimore game, Mayfield looked determined to stand in the pocket and it paid off. It was Cleveland’s most complete game of the season. The hope was that the problem had been diagnosed, fixed but those struggles reared their ugly heads again against a very gifted San Francisco pass rush. The quarterback was double-clutching, sailing passes and taking his eyes off the play downfield. It led to a two interception game and the first of his professional career without a passing touchdown.

Left tackle is a big problem and there are not many solutions at this point in the season. General manager John Dorsey is likely not keen on surrendering a first-round pick for the second consecutive season and then paying $15 million annually to 31-year-old Trent Williams.

The self-reflection must go deeper than the offense though. 49ers head coach Kyle Shanahan was one step ahead of Kitchens at every point in the night. San Francisco was dominating and yet Cleveland was right there. What should have been a touchdown pass resulting in a 14-10 game late in the second quarter turned into an interception because Antonio Callaway, who recently returned from suspension, bobbled a pass that hit him in the hands and kept it alive long enough for former Brown K’Waun Williams to get his hands on it. It was that kind of night for the Browns.

San Francisco’s wide receivers — a supposed weak link leading up to the game — were making shoestring catches look routine. Everything was going their way and the Browns did nothing to help their own case. Players were not fighting through blocks, hustling or making textbook tackles but rather trying to body a bigger opponent to the ground — bold strategy. Cleveland was not prepared, which falls on everyone from the coaching staff to the players. Kitchens threw a challenge flag in the second half that wreaked of desperation and had no chance to be overturned.

Sure, Cleveland could try to blame their early-season struggles on injuries. They have had plenty from Njoku and outside linebacker Christian Kirksey to starting cornerbacks Denzel Ward, Greedy Williams, who have missed a month with hamstring injuries, and more but no one is feeling sorry for them or offering aid.

They have to figure this out themselves and there is no time for self-pity. If the team dwells on their mistakes rather than correcting them, the season will fall entirely off the rails. Their next two games are against the Seahawks and the Patriots.

How can the Browns fix their issues? They have to stop taking the ball first. They need to commit to more heavy personnel packages (12, utilizing an extra tight end) with a goal of helping struggling left tackle Greg Robinson and establishing the run early in games. They also need to mix in more screen passes to equalize the opposing team’s heavy pass rush. Chubb has to be the focal point of the offense for the remainder of the 2019 season.

Success in the passing game will happen organically from there. Kitchens must consider relinquishing play-calling duties to offensive coordinator Todd Monken because he looks like he is in over his head and it appears to be taking a toll on him. On defense, it is back to the basics — win at the point of attack and wrap up tackles. Anything less is inexcusable.

To punter Jamie Gillan and Austin Seibert, keep doing your thing. You guys have been rock stars.

Monday was a total system failure and if problems persist, it will lead to more change in Cleveland. How the young Browns handle adversity will ultimately determine the course for the rest of their season.