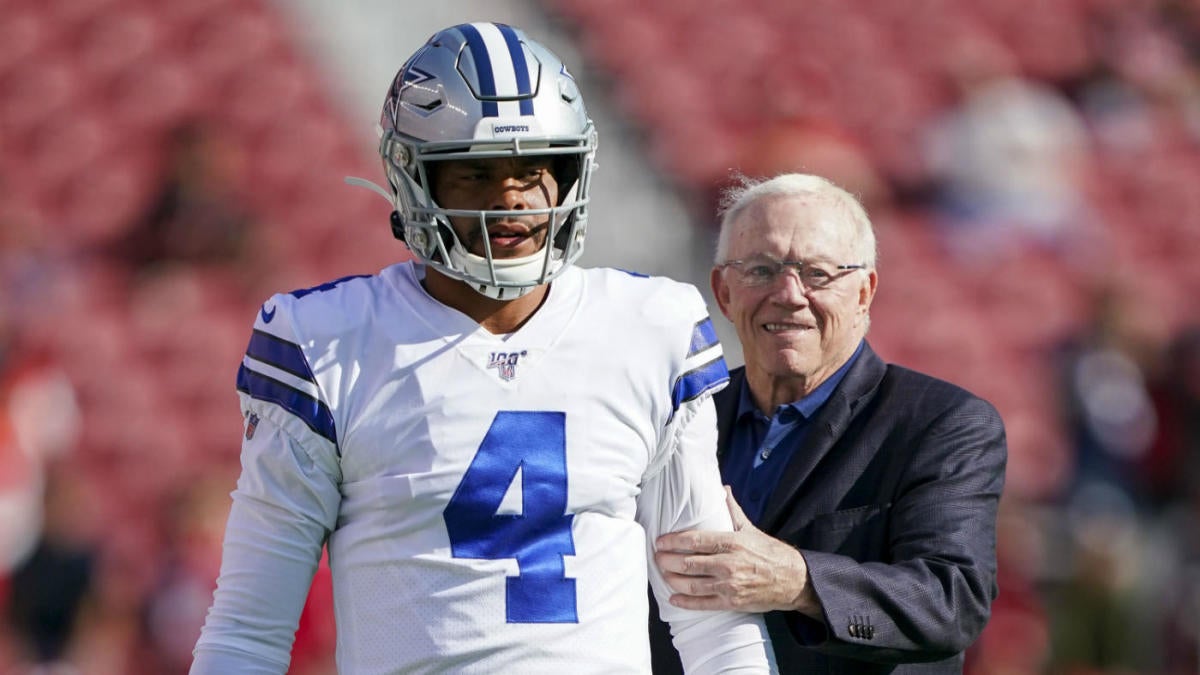 In the midst of the Dallas Cowboys working to recover from an eye-opening defeat at home at the hands of the Green Bay Packers, owner Jerry Jones is at least getting a tickle out of something he’s been hearing all season. When quarterback Dak Prescott was operating at an league MVP caliber level in the first three games, all the world insisted he sign his looming contract extension while the iron was blazing hot — because he deserved it and more, that group screamed.

After having now suffered two consecutive losses, however, that same faction is tearing Prescott down and no longer believes he’s the answer at QB for the Cowboys. This is despite having a bounce back game against the Packers that saw him nearly mount a historic comeback victory with a career-best 463 passing yards and two touchdowns that could’ve easily been more, if not for a tip drill interception created by wideout Amari Cooper on the first offensive drive from scrimmage.

The error by Cooper and the non-call on Packers cornerback Kevin King — who many rightfully argue interfered with Michael Gallup on a late-game curl route to help him grab Prescott’s third INT of the game — marred an otherwise strong outing by Prescott.

Was he perfect? Spoiler: No, he was not.

He had his own errors as well, and they include a terrible decision to throw into zone coverage on his second interception along with a sailed end zone pass to Randall Cobb that could’ve resulted in a touchdown, but instead got mailed out of bounds but was very nearly an INT. There was also an interception that was called back on penalty, but you get the picture: it wasn’t a bad game by Prescott, but it was instead a good game that could’ve been a great one if not for errors all over the field and one of the worst defensive outings the Cowboys have seen in recent memory.

Also, he was sacked three times and hurried a total of eight times against the Packers with All-Pro left tackle Tyron Smith absent and right tackle La’El Collins being knocked out of the game with an MCL injury, after struggling through a back issue up to that point.

All of this matters, and nothing mentioned above should be dismissed or not weighted appropriately to prove a point, by the way.

In the end, the Cowboys are now 3-2 and the conversation regarding Prescott’s contract continues to wax and wane in the court of public opinion. It sat in the former category for nearly a month before shifting to the latter, but Jones says it’s time that chatter came to a definitive and swift end.

“Well, first of all, the narrative about his financial as opposed to how he’s playing is laughable,” Jones said on Tuesday following the loss to the Packers, via 105.3 FM the Fan. “It’s just not that way. It’s too much on both ends of that for both ends of the team and for Dak to equate his performance, stats, or won-loss these first two or three games. Let me get that real clear.”

In other words, the Cowboys aren’t constantly using White-Out to change the numbers on what they’ve offered Prescott. If anything, the late-game rally reaffirmed what Jones already believes about the never-say-die attitude of his young signal-caller.

Having recently compared Prescott to Tom Brady, Jones is all-in, to say the least.

“[The two losses are not] impacting [Prescott’s contract] with me at all,” Jones continued. “But I do see Dak showing the ability to handle adversity and basically go out and make the kind of plays that win important games for the Cowboys in the future. I see that.

“There’s not but one way to see it, and that’s when you get in those critical situations. I’ve seen guys’ knees buckle when they get in that spot. Dak’s [knees] don’t. And, so, from that standpoint these trying times give you another read to look at.

“When expectations are up, when everybody knows he’s getting in the huddle, things aren’t going good. The momentum is going the other way so to speak. Well, I see Dak step up there and continue to make the play.

“How you make that play, what you do on that play is what experience is all about and it’s what, at the end of the day, preparation is all about. Dak has the physical ability to do all of this. He has the mental ability to absolutely do all of it in really a winning way. We’ve just got to understand that no matter what kind of talent he develops as he improves, or no matter how much experience he gets, the other team is well paid and they’re going to come out there and challenge it.

Prescott is currently enjoying the highest accuracy percentage (69.6%) of his career, and is on track to deliver 12 more passing touchdowns than his career-best 2018 season when he won Rookie of the Year honors. None of this is because he’s simply dumping the ball off, though — another narrative that floats around and refuses to go down despite repeated flushes — because his 9.4 yards per attempt and 13.5 yards gained per pass completion are the highest numbers he’s ever logged in either category. Additionally, his passer rating of 106.0 is a career high and he’s achieving this while having also honed his down-the-field accuracy, and he remains on pace to surpass his career high of 3,667 passing yards with a 5,139-yard year in 2019.

All of that is despite a couple hiccups, and it shows you why Jones and the Cowboys haven’t budged a millimeter in their goal of making Prescott their quarterback for the better part of the next decade, or the potential amount of the coming payout therein. When will it happen? At the moment of Prescott’s choosing, considering he’s the one holding the pen, but Jones — along with Prescott’s numbers in 2019 — are putting an end to any question of a sliding scale that changes with every snap of the ball.

For Jones, the dark cloud now hovering above the Cowboys is an indication they’ll actually see more Rayne in the forecast — not less.