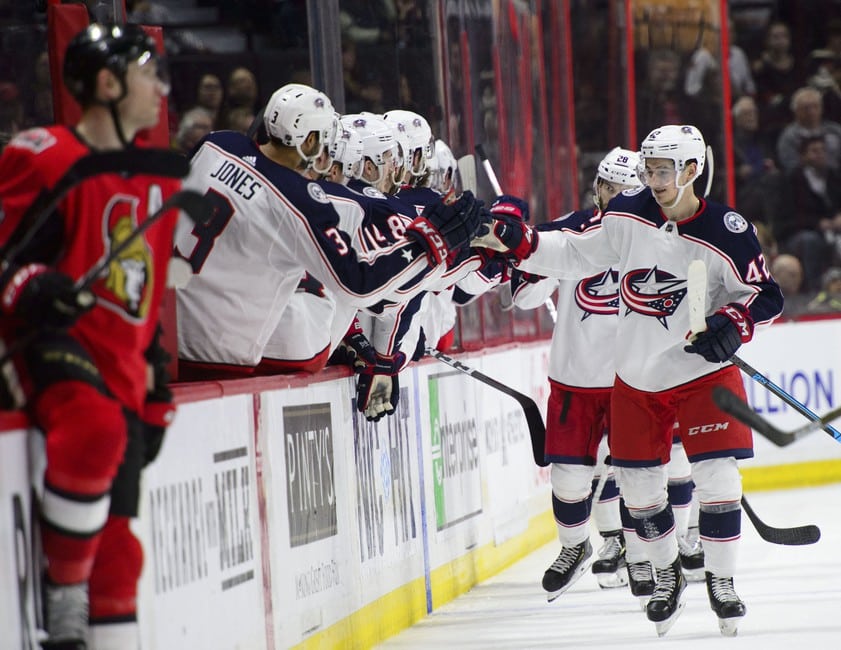 COLUMBUS, Ohio — Rookie Alexandre Texier scored 2:08 into overtime to lift the Columbus Blue Jackets to a 4-3 win over the Buffalo Sabres on Monday night.

Texier beat Linus Ullmark from the right circle off a quick pass from Nick Foligno to give the Blue Jackets their first win of the season.

Victor Olofsson scored for the Sabres, who had pulled the goalie on the power play to create a 6-on-4 advantage, with 1:14 left in the game to tie the score and force the extra period.

Foligno, Oliver Bjorkstrand and Cam Atkinson also scored for the Blue Jackets, who had dropped their first two games of the season by a combined 10-3 score. They outshot Buffalo 44-18.

Joonas Korpisalo had 15 saves for Columbus.

Marcus Johansson and Jeff Skinner also scored for Buffalo and Ullmark, making his first start of the season, had 40 saves.

Bjorkstrand, playing in his 200th NHL game, got his first goal of the season with 1:51 left in the first when he grabbed a carom off the back boards and shot from a sharp angle, bouncing the puck in off Ullmark’s back.

The Blue Jackets struck again quickly when Atkinson — just 9 seconds into a power play — scored from the bottom of the right circle off a sharp behind-the-net feed from Alexander Wennberg.

Early in the second period, it was Buffalo’s turn to capitalize on a power play. Johansson, signed as an unrestricted free agent in the summer, got his first goal with the Sabres on a one-timer from the right circle to cut Columbus’ lead to 2-1.

Skinner tied the score for Buffalo later in the second when he picked Ryan Murray’s pocket in the defensive zone on the Blue Jackets’ transition and rifled a shot past Korpisalo from 30 feet.

Foligno batted in a bouncing puck amid heavy traffic to give Columbus the lead again on a power play 6:46 into the third.