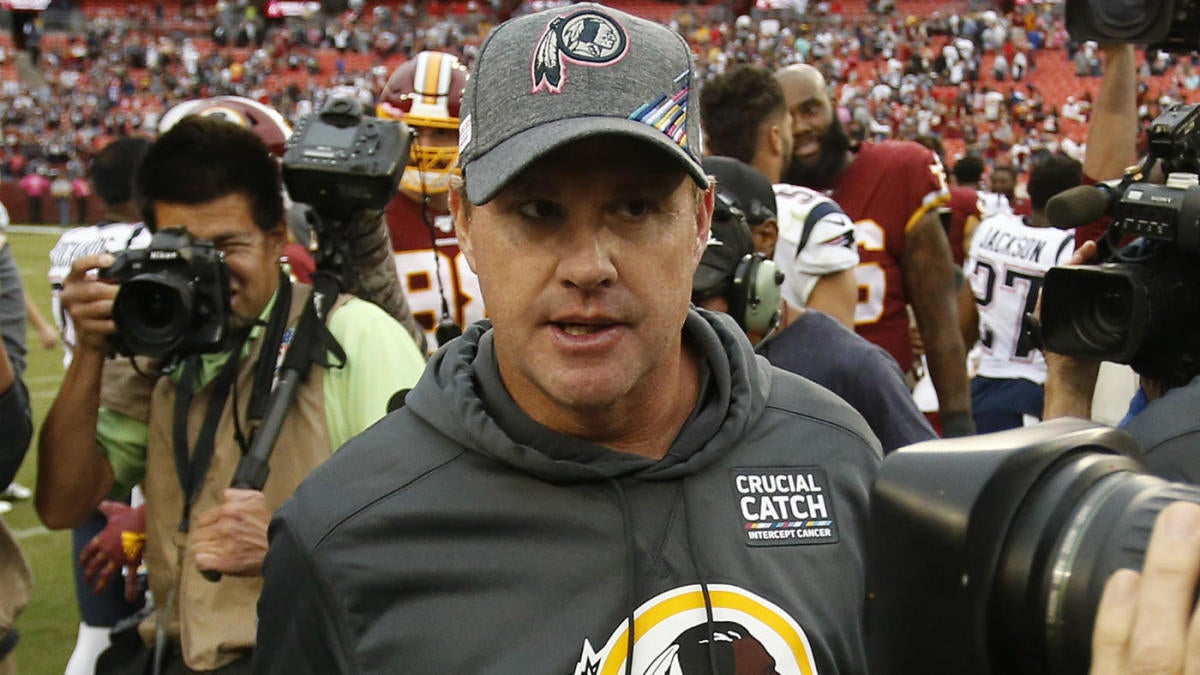 The seemingly inevitable has occurred, and head coach Jay Gruden has been given his walking papers by the Washington Redskins following an abysmal 0-5 start to the 2019 season.

His decision to start Colt McCoy over both Dwayne Haskins and Case Keenum in Week 5 marked the third change at quarterback in five quarters of play, and signified his refusal to finally hand the keys over to Haskins permanently — to give the first-round pick a real shot at improving this season. Playing in his first game since breaking his leg last December, McCoy mustered only 119 yards on 18 for 27 passing, with no touchdowns and an interception.

It all finally became too much for general manager Bruce Allen and owner Dan Snyder, who gave Gruden the ax on Monday. Now a free agent, there won’t be much demand for his services after the steady demise of the Redskins on his watch, but at least five teams might have interest at some point — in some capacity.

This is by far the most likely outcome for Gruden — as also noted by CBS Sports Insider Jason La Canfora before the firing — as it involves uniting with his older brother Jon as the Raiders ready for their move from Oakland to Las Vegas for a fresh organizational start. The elder sibling is enjoying a hard-fought win against the Chicago Bears in London this week, but his offense and the play of quarterback Derek Carr have been wildly inconsistent since he rejoined the team in 2018. If he believes his younger brother can help kickstart it as the offensive coordinator, he’ll likely bring him in. Even if he doesn’t believe it, he could still find a role for him on the team, because pretending nepotism in the NFL doesn’t exist is a fool’s errand.

Like Gruden in Washington, the seat beneath head coach Dan Quinn is blazing hot and it feels like there’s a divorce barreling down the pike between him and the Falcons. The team is just as offensively inconsistent as the Raiders, and that’s much worse by comparison when considering the weapons that exist in North Georgia. Currently averaging 20.4 points per game despite having a former NFL MVP in Matt Ryan, a perennial All-Pro in Julio Jones and a stellar receiving upstart in second-year talent Calvin Ridley, the offense is a key reason the team is 1-4 with no upswing in sight. At best, Gruden could be a potential head coach replacement for Quinn, but this is Dirk Koetter’s second stint with the team as an offensive coordinator and he’s failing as well — possibly leaving Quinn to jettison him and install Gruden in a flailed attempt at trying to save himself.

If you know anything about Mike Vrabel, you know he has an affinity for “his guys” when it comes to coaching. That said, it’s safe to say that — at least for now — Vrabel is safe in his second year as head coach of the Titans, but you could justifiably question if the same can be said for offensive coordinator Arthur Smith. Smith was already with the Titans long before Vrabel arrived and climbed the ranks before getting the nod from an incoming Vrabel to handle duties as offensive coordinator this season. Things aren’t exactly going swimmingly, with the team sitting at 2-3 and their offense averaging a measly 19.6 points per outing. That number would also be much lower if not for the 43-point bomb dropped on the Cleveland Browns in the opener, but the Titans haven’t come remotely close to that output since. If they’re looking to at least appear like they want to keep Mariota around and tinker heavily with this offense, Gruden could be an option. Sometimes a fresh start is all someone needs to find their mojo again.

Still winless through five games, the offense in South Florida looks like it’s been hit by a Category 5 hurricane. Even after making the wise decision to change from Ryan Fitzpatrick to former first-round pick Josh Rosen, new head coach Brian Flores can’t get things going on that side of the ball. It’s the main reason they’re 0-5, but Flores is a former linebackers coach and defensive-minded leader, which means the onus is on Chad O’Shea to fix things for Rosen and Co.; but it’s not going well. Going into their Week 5 bye, the Dolphins average the fewest points per game in the NFL at just 6.5 — unable to muster even a touchdown per game average. A transplant from the Patriots who was brought in with Flores, O’Shea is a former wideouts coach trying to find his legs as a first-time offensive coordinator. Flores isn’t going anywhere any time soon, presumably, but that doesn’t mean he can’t shake things up early on in his administration. Gruden is at least an experienced head coach and coordinator on offense and if Flores wants Year 2 to look better than Year 1 in Miami, the thought might cross his mind.

There’s no one in the NFL who continues to swing as wildly between a blazing hot seat and a cooled one than Bill O’Brien, having entered the season with one of the hottest rear ends in the NFL only to lead the team to a 3-2 start atop the AFC South with the Indianapolis Colts. Still, you have to wonder how many lives O’Brien has, and if he’ll exhaust his final one in 2019 if the Texans don’t make the playoffs — at minimum — and then win at least one playoff game. They’ve never made noise in January under O’Brien, and the offense has been up-and-down this year before the 53-point explosion against the visiting Atlanta Falcons. One week prior, they lost on their very some home field to the visiting Carolina Panthers — unable to outscore Kyle Allen. It’s this kind of duplicity that could be the Texans undoing and, as such, O’Brien’s as well; leaving an opening for Gruden to potentially slide into down the road. Then again, much like Quinn above, O’Brien could simply throw offensive coordinator Tim Kelly under the bus at some point and then give Gruden a call to save himself.