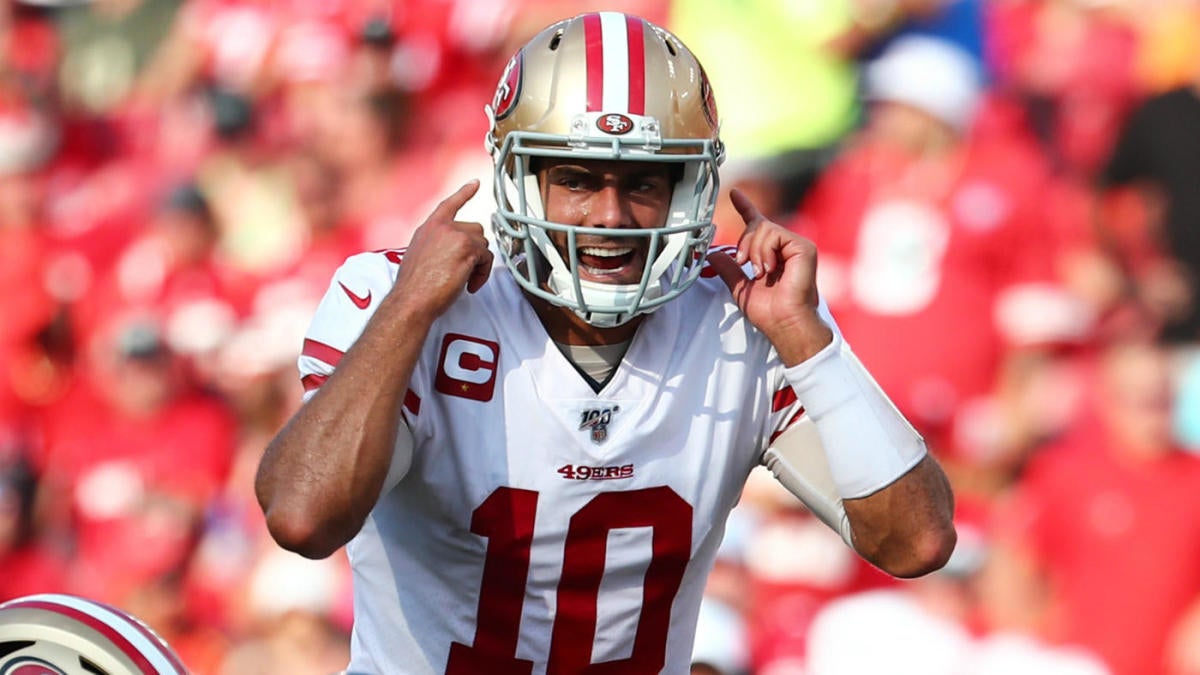 Week 5 in the NFL has been a pretty wild one.

On Monday night, we get a matchup of two of the more interesting teams in the NFL. The San Francisco 49ers are undefeated and sit in first place in the NFC West. The Cleveland Browns are only 2-2 and have surprisingly struggled to get their offense untracked, but they’re still right in the thick of things in the AFC North.

Both of these squads have the look of potential playoff contenders, and while it’s still early in the season, this game could go a long way toward deciding whether or not they are able to make it to the postseason. Let’s break down what to look for on each side of the ball.

Week 5 is almost in the books and there’s a lot to go over. Fortunately Will Brinson, John Breech, and Sean Wagner-McGough are here to break everything down on the latest episode of the Pick Six Podcast. Listen to the full show below and be sure to subscribe right here for daily NFL goodness.

Get more NFL picks, betting analysis and access to proven computer simulations and fantasy tools by joining SportsLine. Former Vegas bookmakers give perspective from the other side of the counter, while red-hot experts with decades of experience handicapping games give their top plays. Join SportsLine here to see this week’s winners.

When the Browns have the ball

The Browns finally managed to get something going offensively last week, racking up 530 yards and 40 points against the division rival Ravens. Previously, they had managed just 330.3 yards and 16.3 points per game against the Titans, Jets, and Rams.

The Browns seemed to find something last week by turning to more 12 personnel (one running back, two tight ends, two receivers) in order to get the defense in heavier packages, and then throwing the ball out of those formations. Considering their lack of success in 11 (one back, one tight end, three receivers) through the first few weeks of the year and how much success they saw out of 12 last season, it makes a lot of sense. But with David Njoku out and the team’s receivers getting healthier, that might push the Browns to get more of those wideouts in the field.

The key was that they actually kept Baker Mayfield well-protected in the pocket. Baltimore sacked, hit, or hurried Mayfield on just seven of 32 drop backs last week, per Pro Football Focus, a rate of only 21.9 percent. In the previous three games, Mayfield was pressured on 38 percent of his drop backs. Considering Mayfield had a disgusting 28.3 passer rating on plays where he was pressured through those first three games, it’s safe to say that keeping him clean in the pocket is pretty important.

Being able to keep Mayfield well-protected against this 49ers defense, though, is a taller task for the Cleveland offensive line. The Niners have pressured opposing quarterbacks on 35 percent of drop backs this season, with Nick Bosa (17 pressured), Arik Armstead (nine), DeForest Buckner (nine), and Dee Ford (seven) each managing to disrupt the opponent’s passing game at different times.

But if the Browns are able to hold up in the trenches, Mayfield should have a chance to find similar success to the kind he had against the Ravens a week ago. The San Francisco defensive backfield has struggled to get a hold of opposing receivers, and will be working without cornerback Ahkello Witherspoon in this game as well. Odell Beckham Jr. didn’t get much going last week against Baltimore, but it’s difficult to envision a better spot for him than this game against the San Francisco secondary.

Coming off his best game of the season, Jarvis Landry (8 catches, 167 yards) was in the concussion protocol throughout the week but has been cleared to play, while Antonio Callaway is set to return from suspension and Rashard Higgins is back from injury as well. Njoku is still out with his concussion and broken wrist, but otherwise, this is the healthiest the Browns’ offense has been all season. That’s especially true when you account for tackle Chris Hubbard, whose return should at least help solidify the offensive line.

It’ll be interesting to watch out for how often the Browns try to lean on Nick Chubb and the running game. Chubb seems like he’s gotten into a bit of a rhythm these past two weeks (43 carries, 261 yards) and has even gotten a bit more involved in the passing game, but San Francisco has done a fantastic job of limiting opponents on the ground. Granted, those opponents have been the Buccaneers, Bengals, and Ben Roethlisberger-less Steelers, but still. This is a strong defensive front, and if they win their battles, they might be able to make the Browns more one-dimensional than they wish to be, and then they can start teeing off with the pass rush.

The 49ers have scored at least 24 points in all three of their games this season, with Kyle Shanahan utilizing his versatile backfield and deep (through not overly talented) crew of wide receivers to keep defenses guessing as to where the ball is actually headed on a play-to-play basis.

Tevin Coleman has been out since Week 1, but Matt Breida, Raheem Mostert, and Jeff Wilson Jr. have done a nice job splitting the backfield work since then. Coleman was limited in practice this week and is tentatively expected to play, which could mean that Wilson finds himself on the bench. Shanahan has floated the idea that he will continue to split the snaps between all three players, with Breida and Mostert working between the 20s and Coleman replacing Wilson as the red zone and goal line back. That’s confusing and frustrating for fantasy footballers, but it seems to work for the Niners. All of San Francisco’s backs bring the ability to make plays happen on the perimeter and in the passing game, which means pretty much anything can happen on any given snap. Given Shanahan’s widely-lauded ability to scheme players into open space, that presents all kinds of problems for opposing defenses.

The Browns’ run defense has left something to be desired so far this season, but the 49ers will be working without stud left tackle Joe Staley, which could complicate things a bit. Cleveland could stand to get stronger play from Olivier Vernon on the right side of the defensive line, and this could be a game where he has a chance to get going. (If what they’ve gotten from Vernon so far is all they’re going to get, they would have been far better off keeping Kevin Zeitler, who has remained one of the best pass-blocking guards in the league.) Sheldon Richardson and Larry Ogunjobi have done a fine job up the middle and Myles Garrett is absolutely dominating at left defensive end, but the right side of the Cleveland defense has been a bit of an issue.

With the way Shanahan schemes things up, we should expect him to target the Browns’ weaknesses and even be able to get his linemen to the second level and get hands on linebacker Joe Schobert, who has probably been Cleveland’s best run defender so far this season. The 49ers have gotten fantastic blocking and it has helped Breida, Mostert, and Wilson get to the second level more often and more quickly than almost any other backs in the league, and that could pose a huge problem for a Browns team that is missing several players in the secondary. Not only did Denzel Ward and Greedy Williams not practice all week, but Morgan Burnett and Sheldrick Redwine were limited throughout the week as well.

But the 49ers do not exactly have a group of receivers that is well-suited to making Cleveland pay on the back end. Dante Pettis has been largely invisible. Marquise Goodwin had a wide-open touchdown catch on a well-designed leak play but has otherwise done basically nothing. Richie James and Kendrick Bourne have combined for seven catches on 15 targets. Deebo Samuel has been the team’s best receiver, and he is basically cycling in and out of the lineup in a rotation with all of these other guys.

And it’s not as though Jimmy Garoppolo is lighting the world on fire. Garoppolo is completing 69 percent of his passes at an average of 8.8 yards per attempt, but he has just five touchdowns and four interceptions through three games despite being one of the least-pressured quarterbacks in all of football. On the 21 plays where he has been sacked, hit, or hurried, Garoppolo is just 9 of 18 for 161 yards, a touchdown, and a pick, with three takedowns.

What happens if the San Francisco offensive line can’t handle Garrett, who has been unhandle-able so far this year? Do you trust Jimmy G to make the right throws, or the 49ers’ pass-catchers to get open quickly enough for those throws to be there in the first place? George Kittle should be able to do it because that’s just what he does, but we have yet to see the guys on the outside prove that they have what it takes.