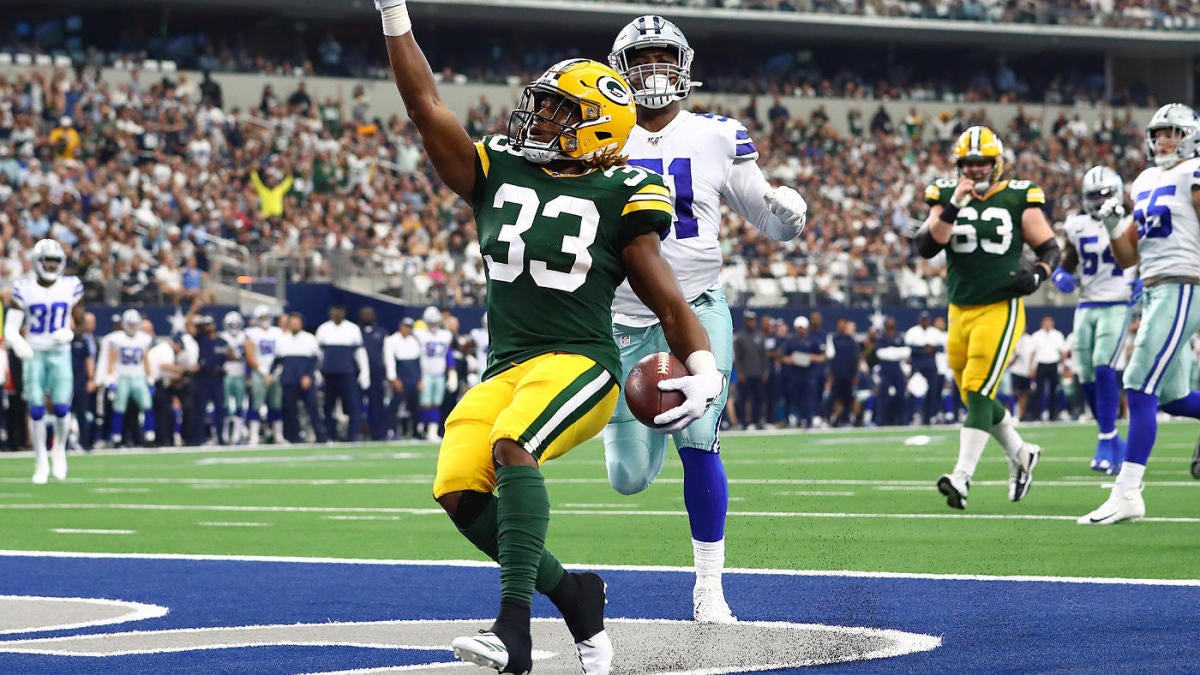 It’s the fifth NFL Sunday of the 2019 season and we’re keeping you updated on all the action and biggest storylines throughout the day. Check back often to find everything you need to know about Week 5.

It may be too little too late but Dallas is putting up a fight late in the fourth quarter of their game against the Packers. Dak Prescott has once again made a big connection with a receiver, this time to Amari Cooper. It’s been a big day for Cooper, who goes over 200 yards receiving after the 53-yard TD.

It hasn’t been a great day for Dak Prescott or the Cowboys’ offense, but one of the few bright spots is this outstanding deep ball to Michael Gallup, who takes it in for Dallas’ first TD of the day.

Chargers shocked back to life

Things haven’t gone well for the Chargers. Fresh off their second red-zone turnover of the day, it looked like Los Angeles was all but dead. But then Desmond King fielded a punt in the third quarter and effectively gave his team a pulse as he took it all the way to the end zone for LA’s first score of the day.

The Packers and Cowboys are the marquee matchup of the late slate and it was all Green Bay in the first half. Aaron Jones is putting in work, rushing for 66 yards on nine carries and catching four passes for an additional 48 yards through two quarters. He’s also put the ball in the end zone twice, both times on the ground.

Jones added two more touchdowns in the second half as the Packers continued to dominate Dallas.

A quick start for Denver

The Broncos are ‘dogs against the Chargers but they came out of the gate firing and jumped out to an early two-score lead in the first quarter. Courtland Sutton had the biggest play of that opening quarter when he hauled in a pass from Joe Flacco and took it 70 yards to the house.

The Steelers had a chance to seal a victory with possession in overtime, but JuJu Smith-Schuster committed a costly fumble when Marlon Humphrey punched the football out of his hands. That turnover helped set up a game-winning field goal for Justin Tucker and Baltimore to end it in OT.

Deshaun Watson had maybe the best game of his young career on Sunday as he absolutely torched Atlanta. The Texans quarterback threw for 426 yards and five passing touchdowns as Houston put up a 53-spot on the scoreboard. Three of those touchdowns went to Will Fuller, who caught 14 total passes for 217 yards. Condolences to anyone who played that guy in fantasy this week.

The other two touchdowns went to Darren Fells — his only two catches of the day. That’s how to make them count.

Things still not going well for the Jets

It’s another big day for Christian McCaffrey. He started hot and hasn’t really relented. For his latest touchdown, the third of the day, McCaffrey went for 84 yards on a run right up the middle.

Teddy Bridgewater is also having himself a damn day, delivering possibly the best QB performance of the weekend. He’s thrown for over 300 yards and four touchdowns, including this 33-yard strike to Ted Ginn, against the Bucs.

Michael Thomas has also had a monster day, catching 10 passes and racking up more than 180 receiving yards and two touchdowns.

Thielen and Cousins back on track

Adam Thielen and Kirk Cousins weren’t exactly best friends after last week’s Vikings game, but the wide receiver’s critical comments may have sparked a big Sunday for the duo. Thielen has six catches, over 120 yards receiving and one touchdown in the first half alone against the Giants.

They also connected for another TD in the second half.

The Patriots are having some unexpected troubles against the Redskins and Tom Brady has thrown an interception in the red zone for the second straight week. He probably should have just tucked that one and taken the sack.

The Panthers defense put some great pressure on Gardner Minshew in the second quarter and forced him to fumble the football in the pocket. Carolina rookie Brian Burns was there to scoop it up and take it all the way to the house to double the Panthers’ lead.

Daniel Jones continues to get Giants fans excited and he delivered a beautiful 35-yard strike to Darius Slayton for a touchdown to get New York on the board against Minnesota. That’s a great throw and a great catch to pick up the TD.

The Jets’ day is off to a fantastic start! Just kidding, New York went for it on fourth down and Luke Falk threw a pick-six to the Eagles defense, who took it 52 yards to jump out to an early two-score lead. Yikes.

If we’ve learned anything in the early going this season, it’s that you should never bet against Minshew Magic. Jags rookie quarterback Gardner Minshew appears to be back on his game against Carolina this week, throwing an early TD to DJ Chark to pull even against the Panthers.

Redskins jump in front of Pats

If you had money on the Washington Redskins to be the first team to hold a lead against the Patriots this season, congratulations… you are now very rich. Washington scored first in their matchup against New England on Sunday, and they did so on the strength of a 65-yard end-around by Steven Sims. It certainly wasn’t the greatest showcase of tackling from the Patriots’ D and, as a result, New England is playing from behind for the first time all year.

Christian McCaffrey didn’t take long to get into the end zone on Sunday, finding pay dirt on the Panthers’ first drive. He got there in exciting fashion too, flipping through the air to pick up six.

Khalil Mack set to face off against Raiders

The Bears and Raiders are playing in London, meaning Khalil Mack will face his former team for the first time. Since being traded to Chicago before last season, Mack has almost matched Oakland’s entire defense in a variety of key defensive stats. Pretty ridiculous. It should be interesting to see what he does with a little extra motivation on Sunday.