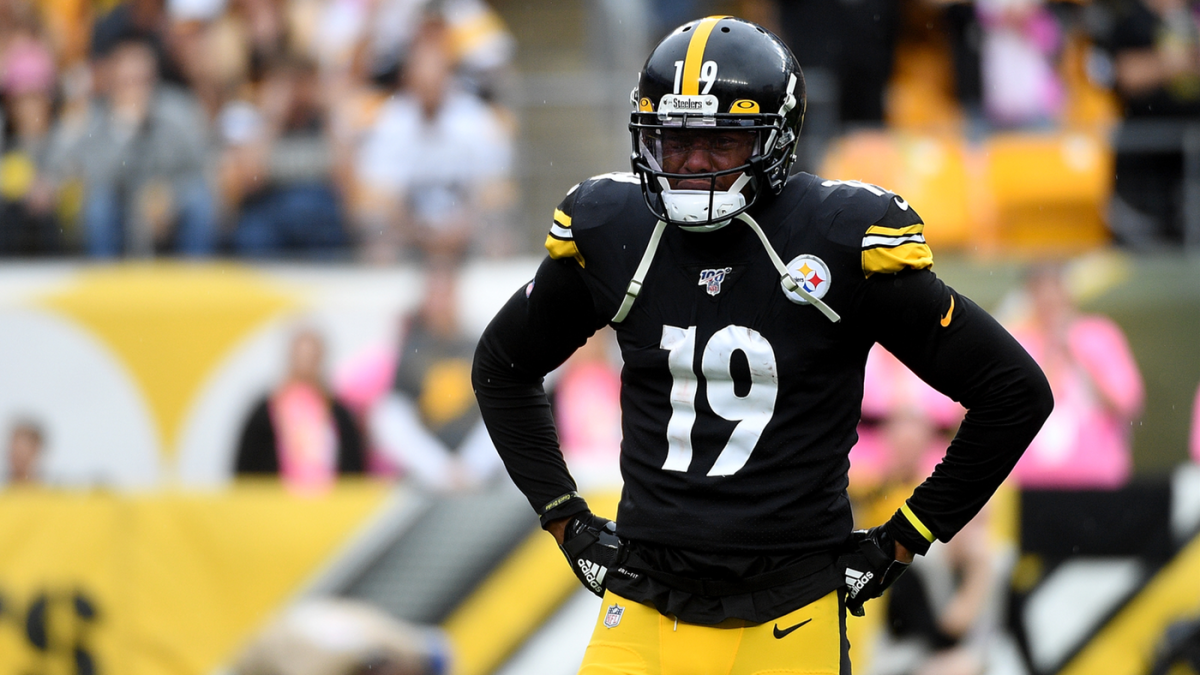 JuJu Smith-Schuster and Marlon Humphrey were on complete opposite ends of the emotional spectrum following the Baltimore Ravens‘ overtime win on the road against the Pittsburgh Steelers.

Humphrey, Baltimore’s veteran cornerback, received a game ball after his forced fumble of Smith-Schuster and recovery in overtime set up Justin Tucker’s game-winning field goal. Conversely, Smith-Schuster looked like he was in physical pain as he answered questions about the play in the locker room shortly after the game.

“I feel terrible. It’s literally the worst feeling ever,” said Smith-Schuster, who finished the game with a season-high seven receptions for 75 yards and a 35-yard touchdown reception. “Knowing that the game’s on the line in overtime. Knowing that Humphrey, that’s what he does. He made a great play in a great situation. He came through for his team.”

Smith-Schuster’s fumble came after Steelers head coach Mike Tomlin elected to have his defense on the field to start the overtime session rather than have his offense try to end overtime with a touchdown. Tomlin’s decision appeared to pay off after his defense forced a three-and-out on Baltimore’s first possession of overtime.

Pittsburgh appeared on their way to a win before Devlin Hodges — who entered the game in the third quarter after starting quarterback Mason Rudolph left the game with a concussion — completed a 10-yard pass to Smith-Schuster that would have given the Steelers a first down near midfield. But Smith-Schuster was unable to hang onto the pass, as Humphrey popped the ball out before making the recovery at Pittsburgh’s 37-yard line.

“My plan was to being able to stiff arm him and be able to get upfield,” Smith-Schuster said. “The whole game he’s been doing that, he’s been punching at the ball. He just came through and made a big play.”

Was there anything he could have done to prevent the fumble?

“Just protect the ball,” he said. “Squeeze it hard.”

The Steelers appeared to go out of their way in support of Smith-Schuster after the game. Tomlin started his postgame press conference by lauding Humphrey’s forced fumble, calling it a “big time play”. Tomlin, according to Jacob Klinger of PennLive.com, invited the sulking Smith-Schuster to come over to his home after the game. Alejandro Villanueva, Pittsburgh’s veteran left tackle who helped teach Smith-Schuster how to drive when the receiver was a rookie during the 2017 season, also expressed support for his teammate.

“I’m sure that he’s really hurt by it,” Villanueva said, “but for me as a teammate, I support him, I’ll help him for anything that he needs. We’ll have his back moving forward.”

While he was asked primarily about his fumble, Smith-Schuster was also asked about Rudolph, who was unconscious for several moments before regaining his consciousness and walking off the field with some assistance. Smith-Schuster was in tears as he watched the medical staff tend to Rudolph, who is reportedly at home recovering from his injury.

“That’s a tough experience,” he said. “I’ve heard of situations where the person’s not moving and he doesn’t get up. I was just praying to God that he gets up and he’s our quarterback and he’s our guy. Praying for a speedy recovery.”

Hodges, who replaced Rudolph for most of the second quarter, played well in relief duty. He went 7 of 9 for 68 yards while leading Pittsburgh’s offense on a pair of scoring drives. Hodges may be in line to start next Sunday night’s road game against the Los Angeles Chargers if Rudolph remains in the NFL‘s concussion protocol for an extended period of time.

“Just a very confident guy,” Smith-Schuster said of Hodges, an undrafted rookie who was added to the 53-man roster after the start of the regular season. “He came in the game ready to play. He hasn’t practiced with us at all throughout the week. Knowing his confidence, and his emotions were strong. He was ready to play.”

“[Hodges is] one of those guys that everyone was kinda watching during training camp,” added Pittsburgh Pro Bowl guard David DeCastro. “He played pretty damn well as a rookie just coming in picking up the offense. He did a good job going out there with no preparation, making some good calls and giving us a great chance to win.”

While the Steelers won’t throw in the towel, it’s clear that their backs are against the wall after losing just their second AFC North division matchup since the start of the 2017 season. In fact, Pittsburgh has lost just three divisional games since 2016, with each loss coming to the Ravens. While the Steelers would have been a half-game behind the Cleveland Browns for first place in the AFC North with a win on Sunday, Pittsburgh is now 1-4 and by themselves in third place in the division standings.

Smith-Schuster’s fumble is a microcosm of how the last year and a half has gone for the Steelers. While they have played well enough to win most of the games they’ve played in, several critical mistakes — particularly at the ends of games — is the reason why they’re just 3-8 in their past 11 games. It seems that the Steelers are at the point where they almost expect something bad to happen and, usually, that’s exactly what happens.

“It means we’re 1-4,” Fitzpatrick said, via Joe Starkey of the Pittsburgh Post-Gazette.

They may be better than a 1-4 team, but as Fitzpatrick pointed out, they are what their record says they are. And while their hopes at achieving anything this season (at this point, keeping their .500 record streak in tact) seems slim, the Steelers insist that they’re giving up. DeCastro made that clear when looking back at Smith-Schuster’s overtime fumble that led to another loss in a game Pittsburgh had every opportunity to win.

“Just a fluky play,” DeCastro said. “Good technique by them. It is what it is. There’s just too much football left. Just gotta get ready for next week.”