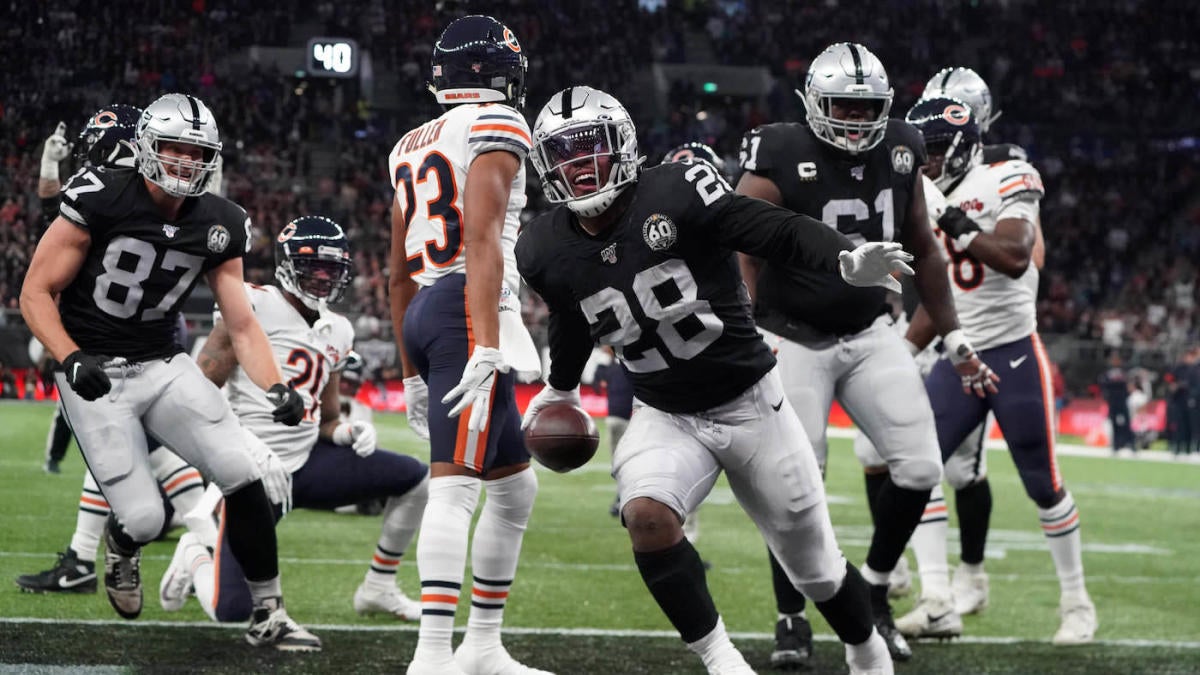 The NFL wanted to show London what entertaining football is all about, and our friends across the pond witnessed a wild matchup in Week 5.

The Oakland Raiders held a 17-0 halftime lead, their largest of the season, but the Chicago Bears put together three straight scoring drives in the second half to take a 21-17 lead. Halfway through the fourth quarter, the Raiders found the end zone for the first time since the halftime break with a two-yard Josh Jacobs run, his second score of the game. That ended up being the game-winning touchdown in Oakland’s 24-21 win, as the Raiders now move to 3-2.

Jacobs had the best game of his young career, rushing 26 times for 123 yards and two touchdowns. Sunday marked the first time this Bears defense had given up a 100-yard rusher since Saquon Barkley put up 125 yards against Chicago last December.

Chase Daniel had his moments during his first start this year. In all, he threw for 231 yards, two touchdowns and two interceptions. When it came down to it, however, the Bears recorded just 236 yards of total offense compared to the Raiders’ 398 yards. Derek Carr kept the chains moving, the offense was effective on third down and they won in the time of possession category.

With this win, Jon Gruden has recorded his first back-to-back victories since he took over in Oakland last year. One of the moves he was most criticized for was trading star pass rusher Khalil Mack away last year. In his revenge game, he recorded three tackles and a fumble recovery, making it the first time since Week 1 where he failed to record a sack.

Why the Raiders won

Oakland’s rookie running back was the reason why the Raiders won on Sunday. While you could point to the defense as a reason the Raiders emerged victorious, Jacobs was the only one who was consistent.

The Raiders’ defense sacked Daniel four times and pressured him all game. They did allow three straight scoring drives that made this one interesting however.

Oakland is trying to get Jacobs more involved in the passing game, and it shows. While he caught just three passes for 20 yards, he was going out as a receiving option more than he had been in the past. We should expect to see him put up more numbers in the receiving game in the near future, as there’s no doubt that the Raiders have a future NFL star in their backfield.

Why the Bears lost

What happened to Chicago’s defense? The first half was full of wimpy arm tackling that was very unlike them. They did a much better job in the second half, as the Raiders had only one drive that lasted more than six plays. Unfortunately, that was the game-winning drive.

The absence of Mitch Trubisky was definitely noticeable, even if he hasn’t played that well through the first few weeks of the season. The Bears’ inability to run the ball is a big reason they lost this game, however.

Chicago mustered just 42 rushing yards. Rookie running back David Montgomery recorded just 25 yards on 11 carries, but did score a touchdown. The Bears found themselves down in a double-digit hole early, so it’s not like they could try to establish their own tempo by using Montgomery and Tarik Cohen. But the Raiders knew the Bears were trying to throw and they played defense like it. Adding more runs into the mix could have shaken some things up.

The turning point occurred halfway through the fourth quarter, when the Raiders attempted a fake punt on fourth-and-1 on their own 28-yard line. It appeared that Erik Harris fumbled after he acquired the first down, and the Bears recovered. Already up four points with every bit of the momentum, it looked like the Bears were ready to put this one on ice. After further review, however, Harris’ elbow was down before the ball was dislodged, which meant that Oakland had indeed earned a first down. The drive continued, and it ended up being the 13-play, 97-yard drive that won the game for the Raiders.

Allen Robinson came into this matchup with zero touchdowns on the season. In the third quarter, he caught two. The second score is worth a second look, as Robinson rose up and just swiped it out of the air over Gareon Conley.

This was a huge moment in the matchup, as it marked the first time that the Bears had a lead over the Raiders. It was the third touchdown Chicago scored in a row, and it looked like the Bears were ready to run away with the game. Unfortunately, these would be the last points they would score.

“That mofo can run the ball.” — Trent Brown (via Vic Tafur)

You can’t say that Week 5 was a coming out party for Jacobs since he leads all rookies in scrimmage yards, but it was a noteworthy performance.

Jacobs hadn’t rushed for 100 yards through his first four games and hadn’t scored a touchdown since the season opener. He did both of those on Sunday and proved that he does have the potential to be a star in this league. It’s not just the box score that looks impressive but also how he looked on the field as well. He’s elusive, quick and appears to have a nice arsenal of moves at his disposal — especially when it comes to his spin move. The Raiders are continuing to find new ways to get Jacobs involved in the offense. He will only improve from here on out.

Both teams get byes in Week 6, as the Bears and Raiders have long trips home from London. Oakland travels to take on the Green Bay Packers in Week 7, and Chicago hosts the New Orleans Saints.

Relive the action in our live blog:

Thanks for joining us!