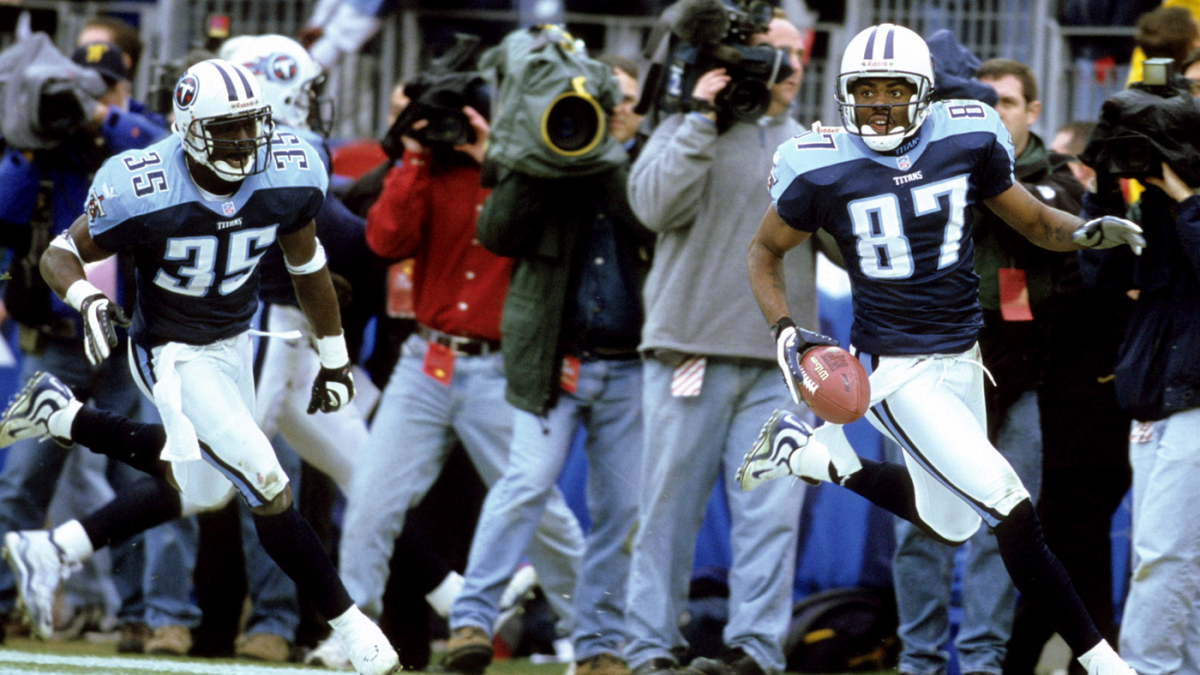 Matchups between teams that recall three of the greatest finishes in playoff history and one of the greatest postseason comebacks in NFL history highlight an NFL Week 5 that includes a slew of historical relevance. This weekend’s historical matchups also include a championship game blowout, a matchup between two teams that share the same birth year and a playoff game that featured zero punts.

Oh, did we mention that they also include two of the greatest rivalries in NFL history? While we’ll dig into each of these historical matchups, let’s start with the playoff finish that will soon celebrate its 20th anniversary.

Who’s going to cover the spread in every Week 5 game? Pete Prisco and R.J. White join host Will Brinson on the Pick Six Podcast to give you winners and more gambling advice. Listen to the full show below and subscribe here for daily NFL goodness.

The “last stand” for the 1990s Buffalo Bills took place in that year’s wild-card round against the Tennessee Titans, who were a wild-card team despite a 13-3 regular season. Heavy underdogs entering the contest, Buffalo, which controversially started quarterback Rob Johnson over Doug Flutie, appeared on its way to the second round after taking a 1-point lead with 16 seconds left.

Tennessee, however, had other plans in mind. After recovering the Bills’ ensuing kickoff, Titans tight end Frank Wycheck ran to his right before turning and firing the ball across the field to receiver Kevin Dyson, who raced down the near sideline — untouched — for the game-winning score.

The play, famously tabbed as the “Music City Miracle,” propelled the Titans to upset victories over Payton Manning’s Colts and Mark Brunell’s Jaguars en route to an appearance in Super Bowl XXXIV. Ironically, it was a score that Dyson was unable to make that made the difference in Tennessee’s Super Bowl loss to the St. Louis Rams.

Buffalo, however, would have wait 18 years before making their next playoff appearance. They are still searching for their first playoff win since 1995.

A playoff game that was never in question took place between the Minnesota Vikings and New York Giants, who faced off in Giants Stadium in the 2000 NFC Championship Game. Despite boasting future Hall of Fame receivers in Cris Carter and Randy Moss along with Pro Bowl quarterback Daunte Culpepper and Pro Bowl running back Robert Smith, the Vikings were shut out by a Giants defense that held them to nine first downs and 114 total yards.

The Giants wouldn’t carry their momentum into their next game, however, as New York fell to Hall of Fame linebacker Ray Lewis and the Baltimore Ravens‘ historically dominant defense in Super Bowl XXXV.

In the divisional round of the 2003 AFC playoffs, the Colts and Chiefs played in arguably the greatest offensive showdown in playoff history. In a game that didn’t see either team punt, the visiting Colts outlasted the Chiefs 38-31 in a game that featured 51 first downs, nine touchdowns, and 842 total yards.

After receiver/return ace Dante Hall’s second-quarter touchdown trimmed the Chiefs’ early deficit to 14-10, a field goal and two Manning touchdowns gave Indianapolis a 31-17 lead with just under two minutes remaining in the third quarter. The game was far from over, however, as Hall’s 92-yard kick return near the end of the quarter made it a 31-24 game entering the final stanza.

The Chiefs’ defense, could not stop the Colts, however, with running back Edgerrin James capping off Indianapolis’ 11-play, 81-yard with a 1-yard touchdown run with 11:18 left. Despite running back Priest Holmes’ late score, Kansas City was unable to complete the comeback while losing their third-consecutive home playoff game.

A decade later, the two teams would face off in one of the greatest comebacks in playoff history. The Colts were down 38-10 in the third quarter, but five late touchdowns by quarterback Andrew Luck — including his game-winning, 64-yard touchdown pass to T.Y. Hilton with 4:21 left — spearheaded Indy’s improbable 45-44 win in the divisional round.

These two historic franchises have faced off in some of the most iconic playoff games in NFL history. After winning a shootout in the Cotton Bowl to capture the 1966 NFL title (en route to a victory in Super Bowl I), Green Bay hosted Dallas in the following year’s NFL title game, a later that will forever be known as the “Ice Bowl”, with a frigid -13 temperature at kickoff and a windchill of -23.

After a trick play gave the Cowboys at 17-14 fourth-quarter lead, Hall of Fame quarterback Bart Starr drove Green Bay to the Dallas 1-yard line with just seconds remaining. After spending their final timeout, Starr and the Packers decided to call a running back on third and goal despite the risk of having the clock run out. Instead of handing it off to his halfback (which was the play Starr called in the huddle), Starr instead kept the ball while carrying Green Bay into NFL immortality. Green Bay won the game and would ultimately win Super Bowl II, their fifth world title of the 1960s.

“We had run out of ideas,” Starr later said of the game-winning play.

“We gambled,” added Hall of Fame coach Vince Lombardi, “and we won.”

The Cowboys’ 1990s dynasty included three postseason wins over the Packers that included a 38-27 win in the 1995 NFC Championship Game. Green Bay, however, settled the score with memorable playoff wins over Dallas in 2014 and in 2016. While an incredible late completion by Aaron Rodgers‘ led to Green Bay’s upset in the ’16 matchup, the ’14 playoff game will forever be known as the game that was decided by Dez Bryant’s apparent catch that was ruled as an incomplete pass. The play later inspired the NFL’s rule that states that a pass-catcher no longer has to “survive the ground” while making a reception.

AFC North rivals Baltimore and Pittsburgh have met four times in the playoffs, with the Steelers winning three of those matchups. Pittsburgh’s win over Baltimore in the 2008 playoffs is best remembered by 2020 Hall of Fame nominee Troy Polamalu’s game-clinching interception return for a score late in the Steelers’ 23-14 victory.

Two years later, then-rookie receiver Antonio Brown’s “helmet grab” helped Pittsburgh overcome a 14-point deficit in the AFC divisional round. Lewis, one of the biggest components of the Steelers-Ravens rivalry, summed up what the rivalry means to him during a 2018 interview.

“As much as I didn’t like them as a competitor,” Lewis said of the Steelers, “the amount of respect for them that I have is amazing.”

While these two teams have yet to face off in the postseason, Jacksonville and Carolina share a special bond as the NFL’s two expansion teams heading into the 1995 season. After posting losing seasons in ’95, both franchises made improbable runs to their respective conference title games in 1996. The Panthers’ marquee win during that run was a home victory over the defending champion Cowboys in the divisional round. That same weekend, the Jaguars edged the Broncos in Denver in what is one of the greatest upsets in NFL postseason history.

While Carolina has advanced to twos Super Bowl, both franchises are still in search of their first Super Bowl victory.