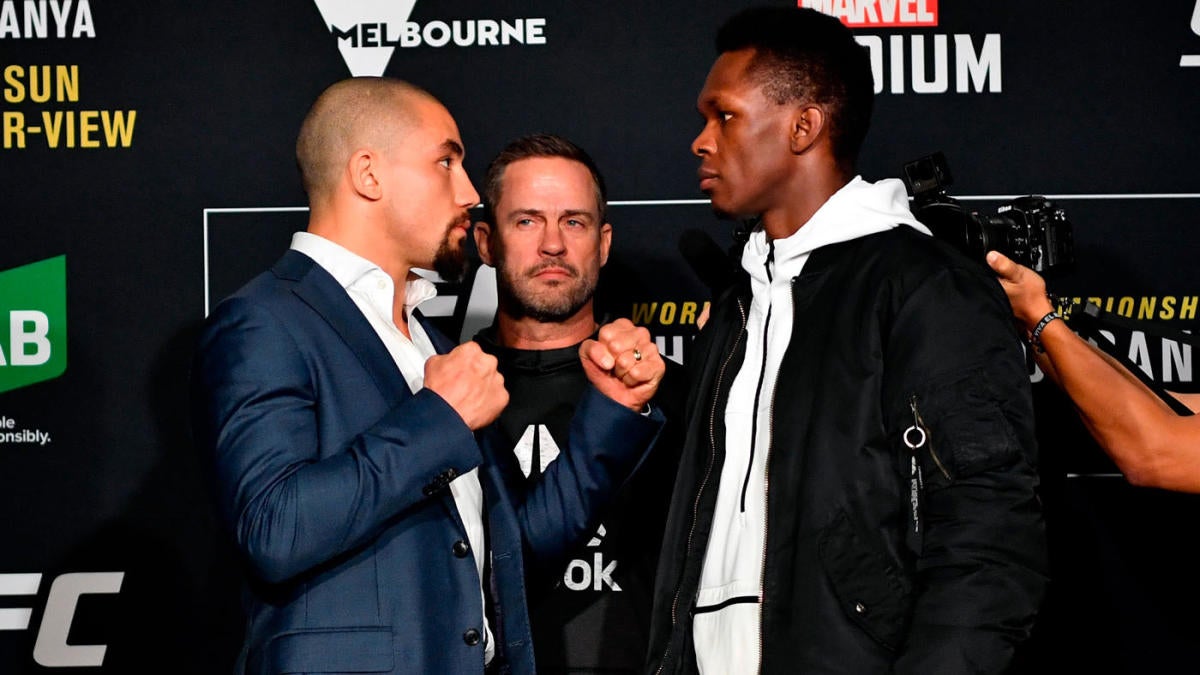 UFC fans have not seen middleweight champion Robert Whittaker in action very much over the past few years, but when he returns to the Octagon in the main event of UFC 243, it will be in as legitimate a fight as fans could ask for. Standing across from Whittaker will be undefeated interim champ Israel Adesanya.

Adding extra heat to an already sizzling main event match up, New Zealander Adesanya (17-0) and Australian Whittaker (20-4) will be fighting in front of a packed and rowdy crowd at Marvel Stadium in Melbourne, Australia.

Whittaker won the interim championship with a July 2017 win over Yoel Romero at UFC 213. While the fight was competitive, not a single media outlet tracked by MMADecisions.com scored the bout for Romero. Following the bout, Whittaker was sidelined due to a knee injury and was promoted to undisputed champion when Georges St. Pierre vacated the title. After more time on the shelf because of a case of staph infection, he returned to action in a June 2018 rematch with Romero which he won via split decision — despite most of the media siding with Romero on their unofficial scorecards. An abdominal hernia and twisted and collapsed bowel sidelined the champ once again, putting off a potential fight with Kelvin Gastelum in February 2019.

While Whittaker has been sidelined for much of the past two years, Adesanya has fought and won six times in the Octagon since 2018. In five of those bouts, he won performance bonuses, including his Fight of the Night victory over Gastelum to capture the interim title. Gastelum pushed Adesanya to his limits, but the New Zealander showed tremendous heart in turning things up down the stretch to take the decision.

Whittaker is looking to Gastelum’s blueprint as how he can come out on top.

“I don’t think he’s going to be able to withstand the heat that I bring — and I’m not looking to finish him; I’m looking to drag this into a five-round war,” Whittaker said at the UFC 243 media day event. “I’m going to drag him into the trenches. I’m going to do what Gastelum did, but better. Let’s see if he wants to leave early.”

The co-main event features lightweights Dan Hooker and Al Iaquinta in a battle to position themselves further up the ranks. To round out the card, Australian heavyweight slugger Tua Tuivasa meets fellow knockout artist Sergey Spivak, Dhiego Lima battles Luke Jumeau in a welterweight clash and Justin Tafa faces Yorgan De Castro in a heavyweight opener to the pay-per-view.

Brookhouse on why Adesanya will win: Adesanya’s striking game is special and there has been visible growth during his time in the Octagon. With each fight, he has seemed to improve his game slightly. In his win over Gastelum to capture the interim championship, he had to show he had an “X-factor” and dig deep to find a little something extra down the stretch. He did just that and has supreme confidence heading into the fight. Whittaker’s wrestling game has gotten stronger, and that may well be his best path to victory, but there are many unknowns as to his current state with as little time as he has spent in the cage over the past two years. I’ll take the kid with confidence.

Wise on why Whittaker will win: While Whittaker may have inactivity hanging in the minds of many pundits, we have still yet to see what Adesanya looks like with an equal test across from him. Adesanya was a heavy favorite to take out the legendary Anderson Silva and seemed to coast to victory while not taking any chances to show the world he can finish. Then against Gastelum, he was expected to take out the Mexican-American challenger with relative ease, but couldn’t find the finishing sequence while also showing some weaknesses of his own. Put all of this together, along with fighting in front of what could be a record crowd in Australia and I have my concerns going into this fight. Adesanya may well be a future champion and P4P king in the Octagon, but until he’s been beat, I will take Whittaker and his grittiness to walk away with the belt.

Brookhouse on why Hooker will win: Both guys can finish a fight and that’s important. But Hooker has the bigger “one hitter quitter” power in his strikes. I lean toward him in a competitive fight simply based on having the ability to flip Iaquinta’s switch if they get into a prolonged striking exchange.

Crosby on why Iaquinta will win: If there is any fighter I trust to properly avoid from the danger Hooker possesses with his power, it’s probably Iaquinta. I agree with my colleague above in that we’re going to get a competitive matchup in this one, but Iaquinta does just enough through a three-round outing to come away with the victory on points.

Who wins Adesanya vs. Whittaker, and how exactly does each fight end? Visit SportsLine now to get detailed picks on every fight at UFC 243, all from the incomparable expert who’s up nearly $21,000 on MMA in the past year, and find out.