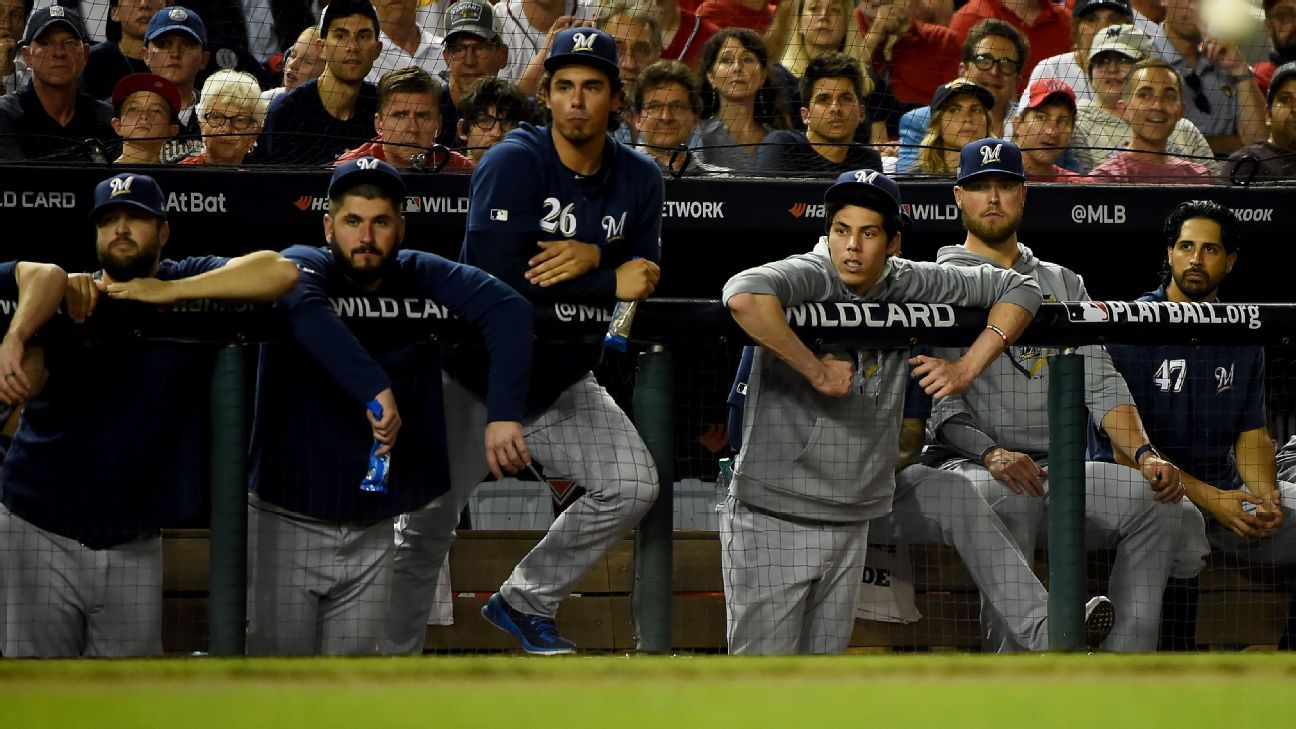 MILWAUKEE — Christian Yelich watched helplessly from the dugout as the Brewers’ season ended.

Milwaukee controlled the first 7 1/3 innings of Tuesday’s NL wild-card game in Washington before a stunning collapse. All-Star closer Josh Hader was wild, and the Brewers were stung by a disputed hit-by-pitch, a broken-bat base hit and an error by overaggressive rookie right fielder Trent Grisham.

Minutes later, the Nationals wildly celebrated their 4-3 victory on the infield while the Brewers — pummeled by injuries, especially down the stretch — limped into the offseason.

“I think when all the dust settles and you really evaluate the year, we can be proud of a lot of things,” Yelich said. “I really think we’ll be better off for a lot of those experiences.”

Yelich overcame lingering back issues to put himself in contention for a second straight NL MVP before a foul ball broke his right kneecap Sept. 10.

Fellow outfielders Lorenzo Cain and Ryan Braun battled through leg injuries in the last week, and the pitching staff faced health woes all season — Corey Knebel had season-ending Tommy John surgery in March, fellow reliever Jeremy Jeffress was released after struggling with a hip issue, and Opening Day starter Jhoulys Chacín landed on the injured list twice before being cut.

Still, the Brewers rallied. They were 13-5 after losing Yelich and overtook the Chicago Cubs for a second straight postseason berth.

“I’m really proud of our guys,” Yelich said. “I think you really got to see the character of our team, the fight, the heart of our guys.”

Yelich won the NL batting title with a .329 average and became the first repeat champion since Colorado’s Larry Walker in 1998-99. His next competition will likely be a tight vote with Los Angeles Dodgers slugger Cody Bellinger for NL MVP.

Grisham was the goat of his postseason debut, letting Juan Soto‘s single roll past him in right field — Yelich’s usual spot — to let in the decisive run.

Despite the error, Grisham should be part of Milwaukee’s plans next year and beyond. He’s among the potential in-house replacements for Braun, a 13-year veteran who is entering the final guaranteed season of a $105 million, five-year deal.

After the wild-card loss, Grisham acknowledged the misplay was “going to sting for a long time,” but he was appreciative of teammates, who gathered near his locker to offer hugs and words of encouragement.

“This team is a natural team,” Grisham said. “When you hear about teams and team spirit and wanting to come to the clubhouse every day, wanting to play baseball every day, they embody that.”

All-Star hitters Yasmani Grandal and Mike Moustakas have mutual contract options and may not return for 2020. Grandal, who led NL catchers with 28 homers, is likely to decline his $16 million option, and Moustakas could be a free agent for the third straight offseason if he or the team declines his $11 million option.

Left-hander Drew Pomeranz is also set to become a free agent. An All-Star in 2016 as a starter, Pomeranz had a 5.68 ERA as a starter for the San Francisco Giants before being acquired by Milwaukee and pushed into a relief role. He thrived in the bullpen, posting a 2.39 ERA in 25 appearances. Manager Craig Counsell entrusted him with two innings in the wild-card game.

Jordan Lyles, another pitcher saved off the scrapheap, is also set for free agency. He was 7-1 with a 2.45 ERA in 11 starts with the Brewers.