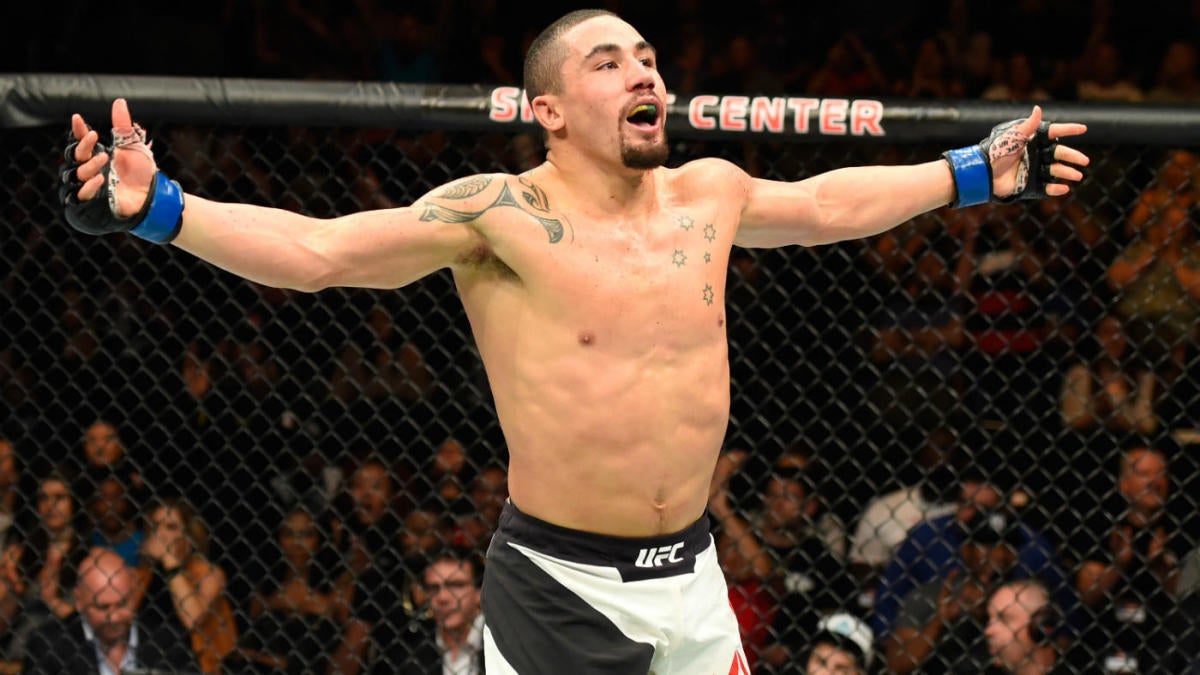 Robert Whittaker will defend his middleweight title before his hometown fans on Saturday when he takes on top-ranked challenger Israel Adesanya in the main event of UFC 243. The 11-fight UFC 243 card takes place from Marvel Stadium in Melbourne, Australia. The main UFC Melbourne card is scheduled to start at 10 p.m. ET. Whittaker (20-4) was born in New Zealand, but has lived and trained in Sydney. It will be the UFC’s 14th event held in Australia, but the first time an Aussie champion has defended a belt on his home soil. Whittaker faces a tough task against the fast-rising Adesanya (17-0), who has won six UFC bouts in the past 20 months. Adesanya is favored at -115 (risk $115 to win $100) on the money line, while Whittaker is -105 in the latest Adesanya vs. Whittaker odds. In the co-main event, Al Iaquinta and Dan Hooker meet in a clash of lightweight contenders. Before you make your UFC 243 picks, make sure you hear what SportsLine MMA expert Kyle Marley has to say.

Marley won the first-ever “ToutMaster” UFC betting contest sponsored by MMAOddsBreaker and is in contention to win this year’s contest. He also appears regularly on multiple MMA betting and DFS shows. Over the past year, $100 bettors who have followed Marley’s picks are up nearly $21,000.

Last week at UFC Fight Night 160, Marley accurately picked Gilbert Burns (-140) to defeat Gunnar Nelson (+120) in a welterweight fight on the main card. He told SportsLine members that Burns’ advantage on the ground would be the difference, and he was spot-on, as the short favorite used a dominant third round on the mat to lock up a unanimous-decision victory.

What’s more, the MMA analyst was also all over the co-main event at UFC 241 as he foresaw Nate Diaz (+110), returning from a three-year layoff and upsetting the dangerous Anthony Pettis. Marley predicted that Diaz’s length and nonstop pace would overwhelm Pettis, and that’s exactly what happened as the underdog dominated from the opening bell. Anyone who followed his advice booked an easy winner, and those who have followed consistently are way up.

Now, with UFC 243 fast approaching, Marley has carefully studied every matchup on the UFC 243 fight card, identified the best value in the UFC odds and released his MMA picks for every single fight. He’s sharing those selections only over at SportsLine.

Marley knows many MMA fans are anticipating the main event becoming a Fight of the Year candidate since it features one of the sport’s most well-rounded fighters in the mild-mannered Whittaker taking on one of its emerging stars in the brash Adesanya.

Whittaker has won nine straight fights, with his last loss coming by knockout to Stephen “Wonderboy” Thompson in February 2014. Although the champion is highly-regarded, his star power has been somewhat limited by his relative inactivity.

Adesanya has no such issues. He stepped up and won the interim title while the oft-injured Whittaker was shelved indefinitely with a variety of ailments. The 30-year-old Nigerian fast gained a reputation for his polished skill set, exciting fights and fearlessness. His last bout immediately became a Fight of the Year candidate after Kelvin Gastelum and Whittaker engaged in a nonstop, bloody war for five rounds. Adesanya got the nod by decision and wasted no time in signing the contract to unify the belt against Whittaker. You can see Marley’s Whittaker vs. Adesanya picks at full UFC 243 predictions at SportsLine.

We’ll reveal one of Marley’s UFC 243 predictions here: he’s backing Dhiego Lima (-150) to get the best of Luke Jumeau (+130) in a welterweight bout on the main card.

“I see Lima being the better striker. He’ll also be the one looking to land takedowns. I’ll take him to win on the scorecards,” Marley told SportsLine.

Marley also has strong picks for Whittaker vs. Adesanya, Iaquinta vs. Hooker and every other bout on the UFC 243 card. You can only get his UFC 243 picks at SportsLine.

Who wins Adesanya vs. Whittaker? And how exactly does each fight end? Visit SportsLine now to get detailed picks on every fight at UFC 243, all from the incomparable expert who’s up nearly $21,000 on MMA in the past year, and find out.